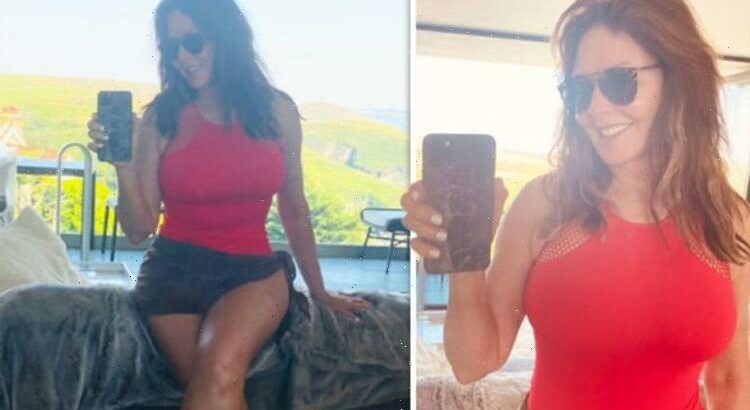 Countdown star Carol Vorderman, 60, was inundated with compliments from admirers on social media after she shared a series of stunning selfies on Twitter today. The presenter has been getting into water sports in recent weeks, sharing regular updates on her paddleboarding experiences with her 465,000 followers.

Today, Carol posted two pictures of herself putting her hourglass curves on display in a daringly skintight red swimsuit.

Showing off her beautiful view ahead of her latest water “adventure”, Carol could be seen posing on her terrace in Wales.

The stylish swimwear enhanced Carol’s bust and featured mesh panelling on the sides of the neckline for a unique touch.

The star paired the one-piece with a brown sarong tied around her waist.

She completed the heat wave-ready look with a pair of flip flops.

Carol also accessorised with a pair of oversized sunglasses before she took to the sea on her paddleboard.

The television personality wrote alongside the snaps: “Off on a paddling adventure yesterday……different day, different adventure…..excited.”

Alongside the selfies, which she also shared on Instagram, Carol drew attention away from her figure and towards her broken phone.

She captioned one of her mirror selfies: “Must get this bloomin phone fixed.”

Fans rushed to the comments section of Carol’s photos to gush over her ageless looks.

Another added: “Omg how come you look younger now than when you first appeared on countdown all those years ago. Its kinda mental.”(sic)

A third commented: “No idea how you do it vorders but girls half your age must be in despair at the way you put them in the shade…”

A fourth admirer gushed: “Hopelessly and completely in love with @carolvorders. Oh well better move on before I get called weird things.”

A fifth replied: “Looking hotter than the sun Carol..”

A sixth penned: “What an adventure…Breathtaking…Amazing you, amazing view.”

Carol previously showed her confidence on the water, as she tried out doing yoga while balancing on her board.

The multitalented TV star posted one snap of her gliding along the water last week, while another saw her doing popular yoga move, the downward-facing dog.

She admitted to fans that her attempt was “rubbish”, but declared she’d had a lovely night despite her errors.

“Do some yoga on your paddleboard they said…lols…..this is my best version of a ‘downward dog’ on a board…..RUBBISHHHHH.