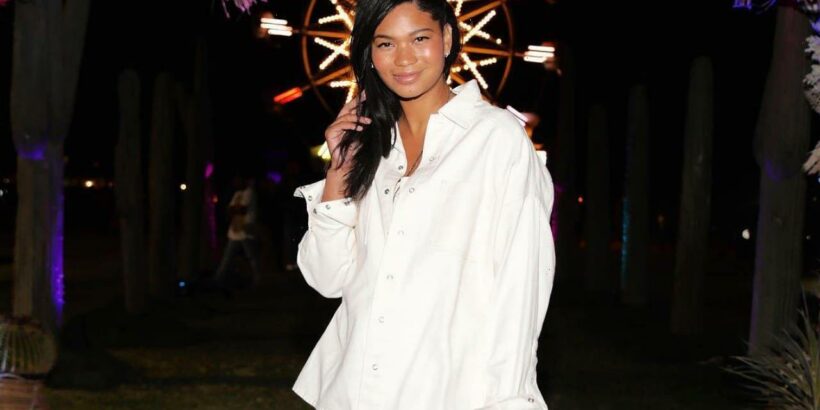 The former Victoria’s Secret Angel shares a picture of her packing on PDA with her buff man at the Revolve Festival in La Quinta, months after her estranged husband quietly filed for divorce.

AceShowbiz –Chanel Iman is single no more. The model has apparently found herself a new man while she’s not officially divorced from Sterling Shepard just yet and she has no intention to hide it from public. The catwalk beauty has just made use of her Instagram page to debut her new boyfriend.

On Sunday, April 17, Chanel took to the photo-sharing platform to share a picture of her packing on PDA with her new man. In the image, she looked happy as the buff guy, whose identity has not been revealed, wrapped his arms around her and planted a kiss on her cheek.

Chanel and her new mystery man posed at what looks like a garden decorated with colorful flowers. She only tagged the Revolve Festival as the location. The party, which returns this year after a two-year hiatus due to the pandemic, was held on the first weekend of the Coachella Festival, April 16 and 17, at the late Merv Griffin‘s estate in La Quinta, California.

Chanel received supportive messages from her followers after going public with her new romance. “Yesss. Happiness looks beautiful on you,” one person wrote in the comment section. Another gushed, “It’s be and stay happy season.” A third commented, “Yaas, girl! Live your life!!” while another added, “Yes to new love!!!!”

Chanel, who once dated A$AP Rocky, married Sterling in March 2018 after getting engaged in December 2017. They have two daughters, 3-year-old Cali and 2-year-old Cassie.

Earlier this year, the estranged couple sparked split rumors after they removed photos of each other from their Instagram pages. Chanel also did not include Sterling in her Christmas post featuring her two daughters. Moreover, they have not been wearing their wedding rings in any new photos on Instagram.

Later, Page Six reported that the NFL star has quietly filed for divorce from the model. The New York Giants player reportedly filed the papers on June 7, 2021 to end their three-year marriage.

In court documents obtained by the site, Sterling cited irreconcilable differences that “existed for at least six months” as the reason of the divorce. The documents also note there is “no reasonable prospect of reconciliation.”

The estranged couple has already completed two mediation sessions as noted in a filing submitted on September 7. The wide receiver requests joint legal custody of their two children. He also asks his house to be his daughters’ primary residence, while Chanel has “supervised parenting time” with the girls.

Neither Chanel nor Sterling has addressed their divorce, but a source told Us Weekly, “They are going to try and remain civil and friendly towards each other.”