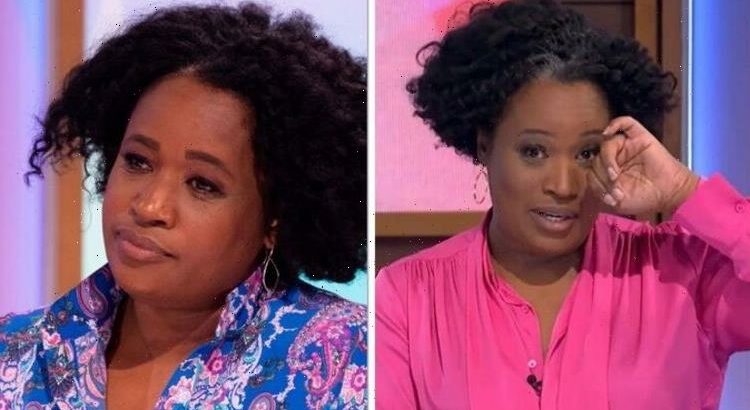 Charlene White admits she 'crumbled' after resonating with poem

Charlene White, 41, has admitted she previously had reservations about joining the Loose Women panel due to feud rumours, which she has now found to be merely “nonsense”. The panellist has said that the stories about the behind-the-scenes arguments are all untrue.

She explained people, including herself, can get a false impression of what the show is really like following the rumours.

The star said the reality of the situation is that everyone on the show is “incredibly supportive.”

Charlene explained: “When you’re on the outside looking in and you see all those stories – nonsense stories, as I now know – written about the ladies on the panel, you have an impression of what it’s going to be like.

“Then you walk into this amazing group of women and realise that everyone’s incredibly supportive.”

She then added that the team is filled with women who “want the best for you” and she feels lucky to be part of the show.

“You’ve got intelligent women who love this programme and only ever want the best for it and are there for you.

“I learnt that pretty quickly and I’ve loved the ride ever since.

“I feel really blessed to be a part of their clan.”

She was also asked by OK! Magazine about the biggest misconception viewers have of the show.

Co-star Nadia Sawalha chimed in, adding that the gang haven’t yet had a chance to party and get drunk.

Charlene explained she’s heard a lot about “legendary” Loose Women parties, but has not yet had a chance to take part in one.

Nadia said: “Now we just need to get drunk more – we haven’t had a chance to party!”

Charlene added: “All I hear about is the legendary Loose Women parties and I’ve not been able to have one.”

“When we can, we’ll hire a nice place and go and have fun. It’s coming!” Nadia concluded.

Jane Moore spoke up about what happens at Loose Women parties.

She said sometimes it will start off as an innocent drink and ends up becoming “messy.”

Jane added that the group have had “some great nights out”.

She said that they recently had a night out on a cinema boat around Paddington Basin.

Jane recalled Kaye Adams was the captain, and nearly crashed into all the other boats.

“Christine Lampard came and she arrived looking pristine, as did Frankie Bridge – and then it was torrential rain! We were drenched but we ordered another bottle of wine and laughed our way through it,” she concluded.