Chelsea Handler revealed that New York Gov. Andrew Cuomo didn’t call her back after agreeing to go on a date with her.

The 45-year-old comedian discussed her newfound crush on Cuomo for his handling of the coronavirus pandemic in her new HBO Max original comedy special “Evolution,” in which she discussed liking older men, specifically the 62-year-old politician.

She appeared on “The View,” where the hosts asked her about her crush, noting that he would be appearing on the show later this week.

CHELSEA HANDLER EXPLAINS SHAMING OF TRUMP-BACKER 50 CENT: 'I HAD TO REMIND HIM THAT HE WAS A BLACK PERSON' 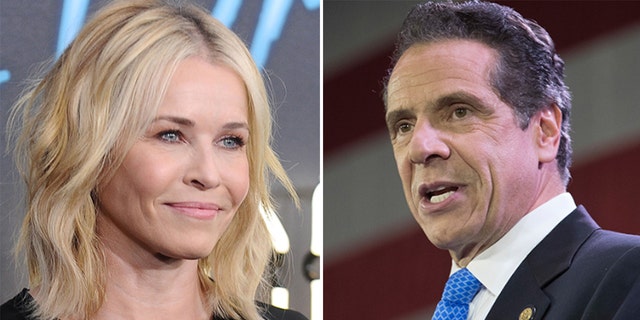 “First of all, he’s like a big giant. He came in like the Incredible Hulk,” she said. “We needed somebody to come on the scene, we were so dehydrated for real leadership that when he came on the scene looking like this big Italian hunk, he was like ‘wear a mask.’ I was like ‘I’ll wear a mask, I’ll put a mask on every part of my body. I wanna flatten your curve and you can flatten my curve and then we can both apex together.”

She then noted that she wanted the ladies of “The View” to ask him a question on her behalf when he shows up. She explained that she previously asked him out on a date but he never followed up.

“I do want you to follow up on something with him for me ladies if you wouldn’t mind,” she said. “I did have a conversation with Cuomo a few months ago and I did ask him out on a date and he did say ‘yes’ and then I never heard from him.”

The hosts promised to question Cuomo on that before pivoting the conversation to her comedy special.

Elsewhere in the interview, Handler talked about comments made by her ex, rapper 50 Cent, who previously said that he would be supporting Donald Trump so as to avoid his taxes going up under Joe Biden’s plan. At the time, Handler called him out publicly on social media, prompting him to walk those comments back. He reportedly gave Handler permission to tell the hosts that he plans to vote for Biden on Election Day.