Chip Gaines dismissed an online article that accused him and his “Fixer Upper” co-star wife Joanna of failing to put their family first.

Gaines said he doesn’t know USA Today contributor Daryl Austin, whose article last week wondered how the HGTV stars could “even find the time to brush their teeth, let alone spend quality, one-on-one time with each child daily.” But Gaines rejected the criticism, and said it’s possible to have both “an amazing family AND career you love.”

“I don’t know daryl, & he clearly doesn’t know me,” Gaines wrote on Twitter. “But for the record: If there is ever a need w/ my family (1st), I’ll shut this circus down so fast it will make your head spin. BUT jo & I believe, w/ God anything is possible. Including having an amazing family AND career you love.”

Austin argued the Gaineses have too many business ventures and TV commitments to live up to the child-centric image they present. The couple, who are expecting their fifth child together, recently wrapped the final season of their hit show, “Fixer Upper,” and said they now want to focus on one thing: their family.

“Chip and Joanna Gaines did not get where they are by putting their family first,” Austin wrote. “They want to be seen as a couple that can do it all while at the same time making their family their top priority. This is just not possible, and it does a disservice to the parents who really are putting their children first.”

The author added: “No matter how rich and famous, we are all limited by the same 24 hours in a day. You cannot do all they’ve done (or even a fraction of it) and still have any real time left over for family. Frankly, I wonder where they even find the time to brush their teeth, let alone spend quality, one-on-one time with each child daily.” 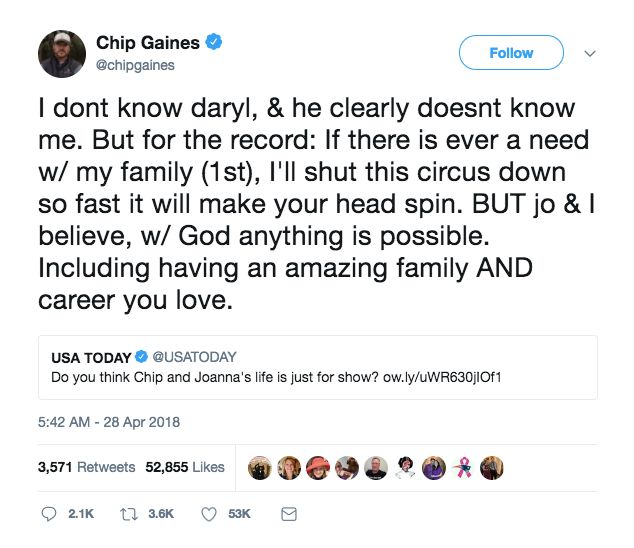 ″For people, they think there’s got to be a reason, like, ’Oh, something bad happened and therefore that’s why they’re leaving the show,′” she said. “I think it’s just hard for people to comprehend, no, we’re just leaving because it’s right instinctively for us and our family. No negative reason.”

Chip Gaines’ mother, Gayle Gaines, offered additional insight into why the couple were walking away from their show in a 2017 interview with Closer Weekly.

Chip and Joanna “earned some time to rest,” Gayle Gaines said. “They care very much about how their children turn out, and they are very well aware that spending time with them and investing in their lives is important.”

And pretty soon, they’ll have another little one to look after.