Royalty Brown, we choose you! While wearing a Pikachu onesie, Chris Brown’s daughter showed she has her daddy’s moves while taking part in another dance craze.

Royalty Brown was feeling some kind of #mood when she posted another dance video on Dec. 28. The 6-year-old daughter of Chris Brown looked like a living Pokemon in her Pikachu onesie while dancing along to Pop Hunna’s “Adderall” (aka that popular “Corvette Corvette” song on TikTok.) Although Royalty’s video was technically on Instagram, she put all those other TikTokers to shame by dancing just like Chris, 31. In the end, she flashed a pair of peace signs and made her exit. That’s the first rule of showbiz: always leave them wanting more.

This video comes about two weeks after Royalty proved she was the next in line for the title of “Queen of Christmas.” The young “holiday princess” showed off her festive dress on Dec. 10. In the shot, she gave Mariah Carey a run for her crown, rocking candy-cane-colored socks by Claires with her red and white Converse sneakers. Add in a festive headband that appeared to have cat ears in the shape of Christmas lights, and Royalty’s outfit was complete.

At the start of the month, Royalty clued fans into how she got so good at dancing. “ME AND MY DAD TIKTOKING!!!” she captioned a Dec. 7 video. In the clip, Chris and Royalty team up to dance along to Lil Dicky’s collaboration with Chris, “Freaky Friday.” Royalty rocked her trademark onesie while Chris moonwalked offscreen before jumping in to shake his rump like a fool. The move put a huge smile on Royalty’s face – at least, that’s what one saw before she twirled her way off-screen. At six years old, she’s already upstaging her dad. 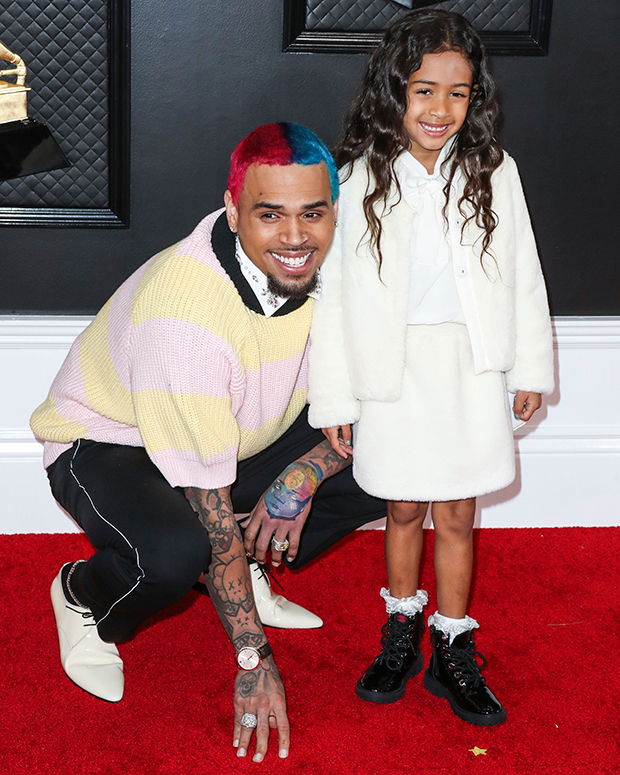 In addition to showcasing her dance moves, Royalty’s IG account has shown she’s brave enough to hold a python that’s bigger than her, she’s already a fashionista, she’s also good at gymnastics, and that she’s the next Tony Hawk. “DAD GAVE ME ONE OF HIS SKATEBOARDS!!!” Royalty captioned an October 2020 video. In the clip, she proudly proclaimed that she had “my knee pads and everything” before hopping on the board.

Though there were a few false starts (“I wasn’t ready” “I was going too fast”), the third time’s the charm, and she managed to get on the board and ride down the road. Maybe in 2021, we’ll get a video of Royalty riding her skateboard with Chris? Perhaps they can get fellow TikTok superstar Nathan “Doggface208” Apodaca (aka the “Oceanspray Cranberry Juice, Fleetwood Mac skateboarder”) for a collab?