Chrissy Teigen and John Legend have two gorgeous kids, over six years of marriage under their belts, and two of the most recognizable faces in Hollywood — but that’s not all they share. From fertility struggles to postpartum depression to backlash from critics, these two have supported each other through it all, and it seems like they only fall more in love every day. Chrissy Teigen and John Legend are total couple goals through and through, and they’ve set the bar seriously high for everyone else. I mean, why settle for anyone who’s not going to take off your jewelry when you’re drunk, wipe away your tears when cutting onions makes your eyes water, and fly from London to watch reality TV with you when you’re sad?

It’s no secret that Chrissy loves to roast John on social media every chance she gets. But the love she has for her husband is undeniable, and he’s not shy about showing her unconditional love in return. Just look at their Twitter bios — Chrissy’s reads, "currently sleeping with people’s sexiest man alive," and John’s says, "Chrissy’s husband." They are hopelessly devoted to each other, and their best couple moments totally prove it.

Though John was supposed to fly from London to DC, he rerouted to LA instead to spend a few hours with Chrissy, who was feeling down. The best part: After Chrissy tweeted this, John replied with his own tweet saying, "I love you my baby. See you tonight." 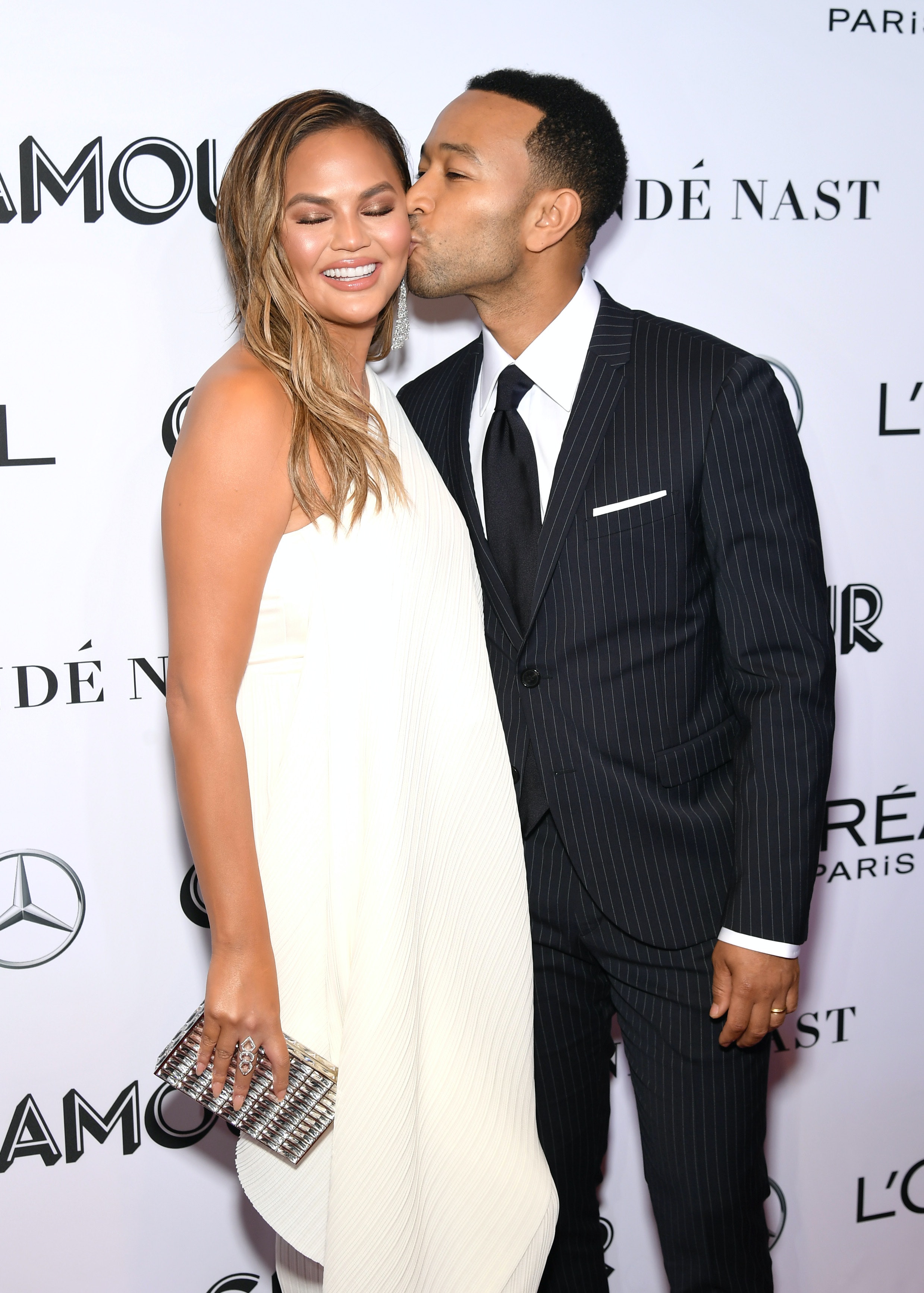 Chrissy was one of the honorees at Glamour‘s 2018 Women of the Year Awards, and when John introduced her, he could barely contain his pride. "People love her honesty," he said. "Her humor. Her beauty and style. Her passion for food. Her sense of adventure and fun. And they love her big, beautiful heart. The heart she wears on her sleeve. She inspires so many people and so many women. I mean, she’s the kind of woman you write songs about."

When Chrissy Cried The First Time She Heard "All Of Me" 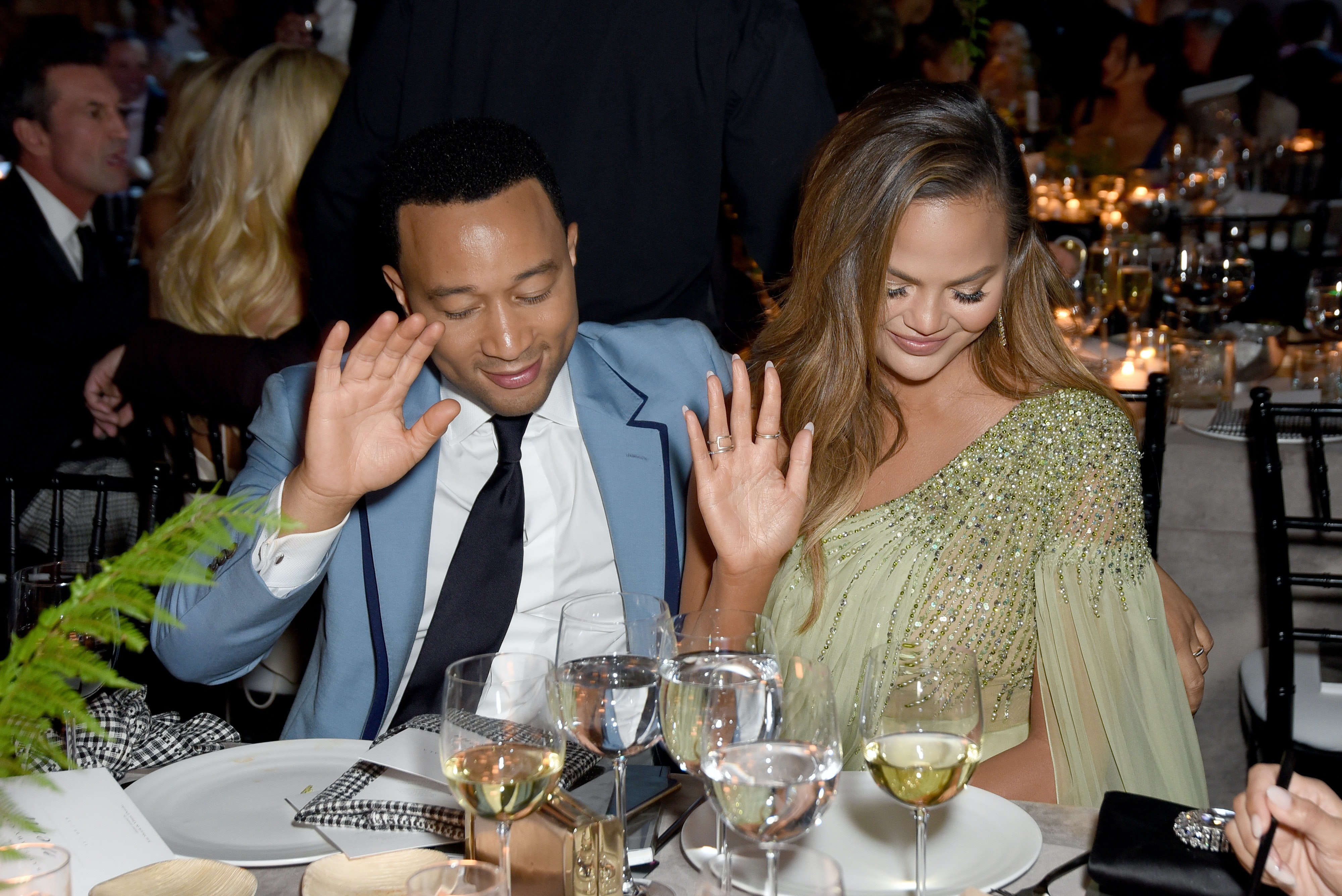 Because Chrissy is the kind of woman you write songs about, John did just that. Back in January 2014, CBS This Morning asked John about the first time Chrissy heard "All of Me," which he wrote for her, and he confessed that she cried upon hearing it. "I sang it to her," he said. "I just whispered it to her when we were at home. I wasn’t even at the piano. I was just, like, excited about it. I didn’t even have the recording yet. …It was late and I was like, ‘You just have to hear this song’ And I sang it to her and she just started crying."

In addition to having an Emmy, Grammy, Oscar, and Tony, John now has the honor of being People‘s Sexiest Man Alive 2019 — but he still takes the time to make his wife lunch. 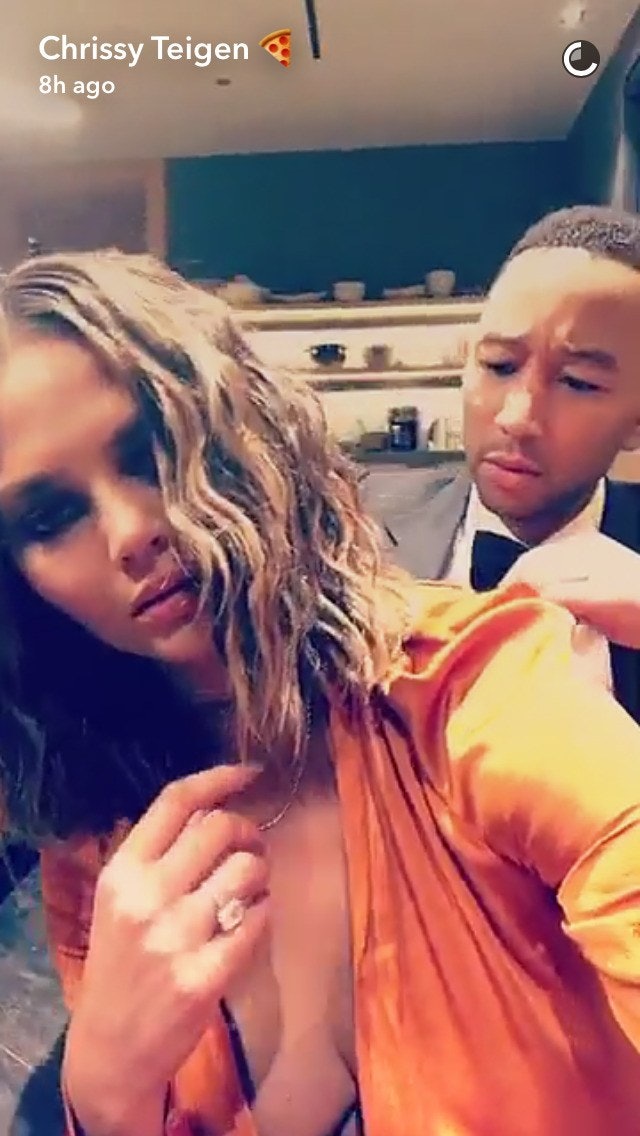 Chrissy and John concluded the night of the 2017 Grammys on their kitchen floor as he took off her necklaces, which she documented in a hilarious Snapchat video. "I’m on the floor and John’s in charge of taking my jewelry off for [stylist Monica Rose]," an intoxicated Chrissy explained in the video. "Take it off, John." In another video, Chrissy asked John, "Are you mad at me?" His response: "Why would I be mad at you? You’re perfect."

Not all of John and Chrissy’s nights have a crazy ending. Sometimes they start with a 5:30 p.m. dinner and end by 8, and they are more than OK with that. In a selfie video posted after a tame date night (which they still have after more than six years of marriage), they admired themselves on screen. "Are we just this good-looking?" Chrissy asked John. "Yeah, we’re just too perfect," he replied.

When Chrissy Wiped Away John’s Tears During A Cooking Class

When John’s eyes watered during a couples cooking class, Chrissy came to the rescue with some tissues.

When John Ate Chicken Wings Off Of Chrissy’s Butt

He may not be able to handle spicy foods in the kitchen, but John had no problem handing these spicy chicken wings, which Chrissy served to him in a very spicy manner.

When They Did ‘Below Deck’ Role Play

Bravo mega-fan Chrissy and John decided to take on the Bravo reality show Below Deck and make it a little sexier. Chrissy introduced herself as the chief stewardess, while John proclaimed himself the captain. "No, you’re the bosun," she corrected. "God!"

Chrissy complained in an Instagram caption that she never had any good pictures of herself to post because she was the designated family photo taker. "…no one else seems to care to be thoughtful and take good photos of me," she said. "They merely click them off without paying attention to angles or lighting or general photo ambiance." Just in case John didn’t take the hint, she concluded her rant with "(To John)." Apparently, he took her feedback seriously, because he nailed this shot just two days later. 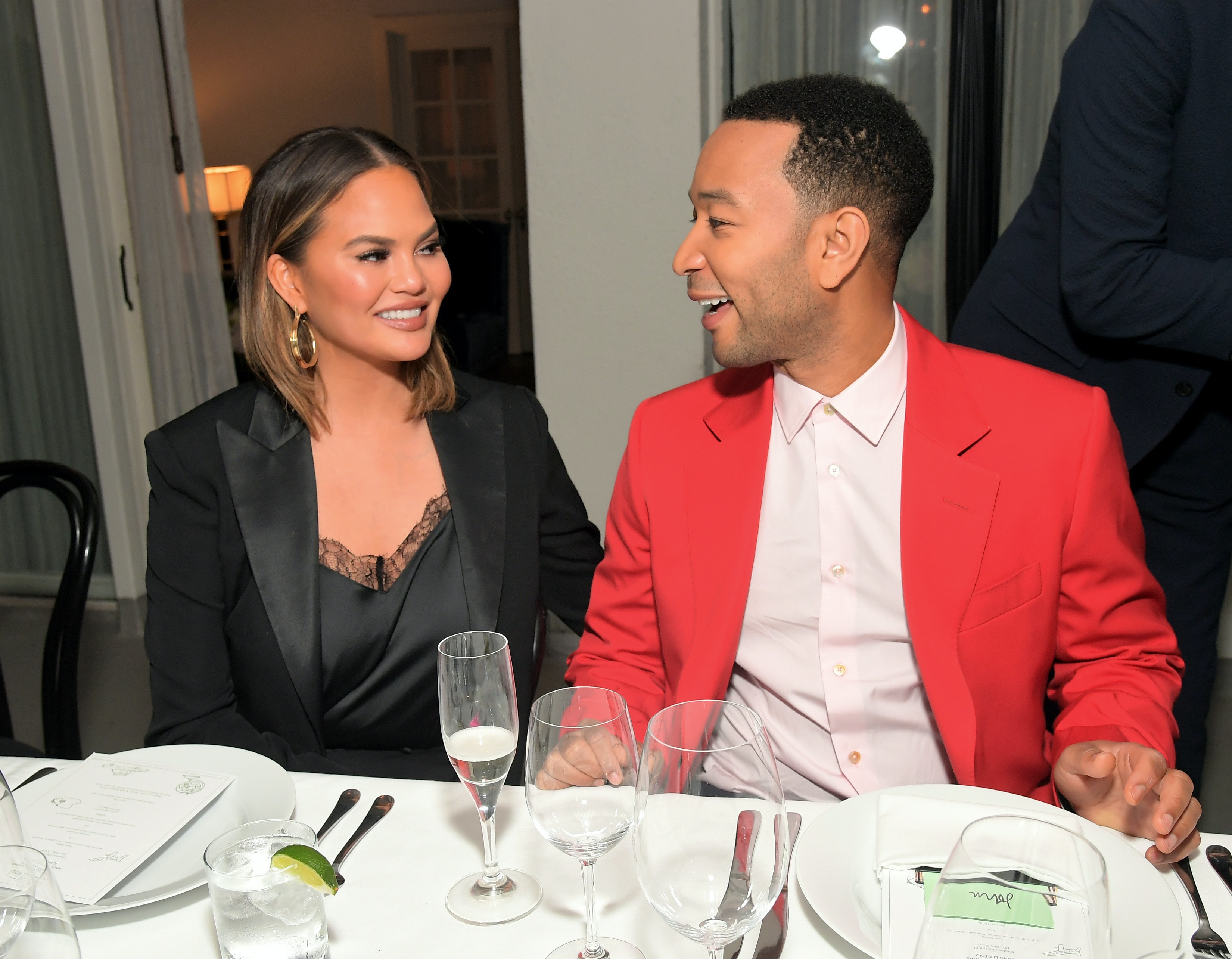 In a candid interview with Cosmopolitan in April 2014, Chrissy (after texting John first to make sure he didn’t mind her sharing the story) revealed the craziest place she and her hubby ever had sex: on an airplane. "We were on our way to Thailand to see my parents, flying commercial first-class," she explained. "We were under a blanket. We weren’t even in one of those pod things. I feel like we should get a trophy for that."

When Chrissy Teared Up After John Won An Oscar

John took home a Golden Globe for Best Original Song in 2015, and Chrissy gifted everyone with the best reaction ever. After it was announced that "Glory" from Selma won the prize, the camera cut to Chrissy’s face moments before she started crying, and her "cry-face" became a meme for the ages.

When John Gifted Chrissy With A Giant Cheese Wheel

John got me my lifetime dream for Christmas! A cheese wheel to dump pasta and risotto in for years to come! My tableside serving game is bout to be liiiiiit! Heading out to relax with the fam now woohoo! ❤️?☀️

John would do just about anything to make his wife’s dreams come true, even if that "lifetime dream" is the giant wheel of cheese he gave her for Christmas in 2015.

When John Said He Would Always Have Chrissy’s Back 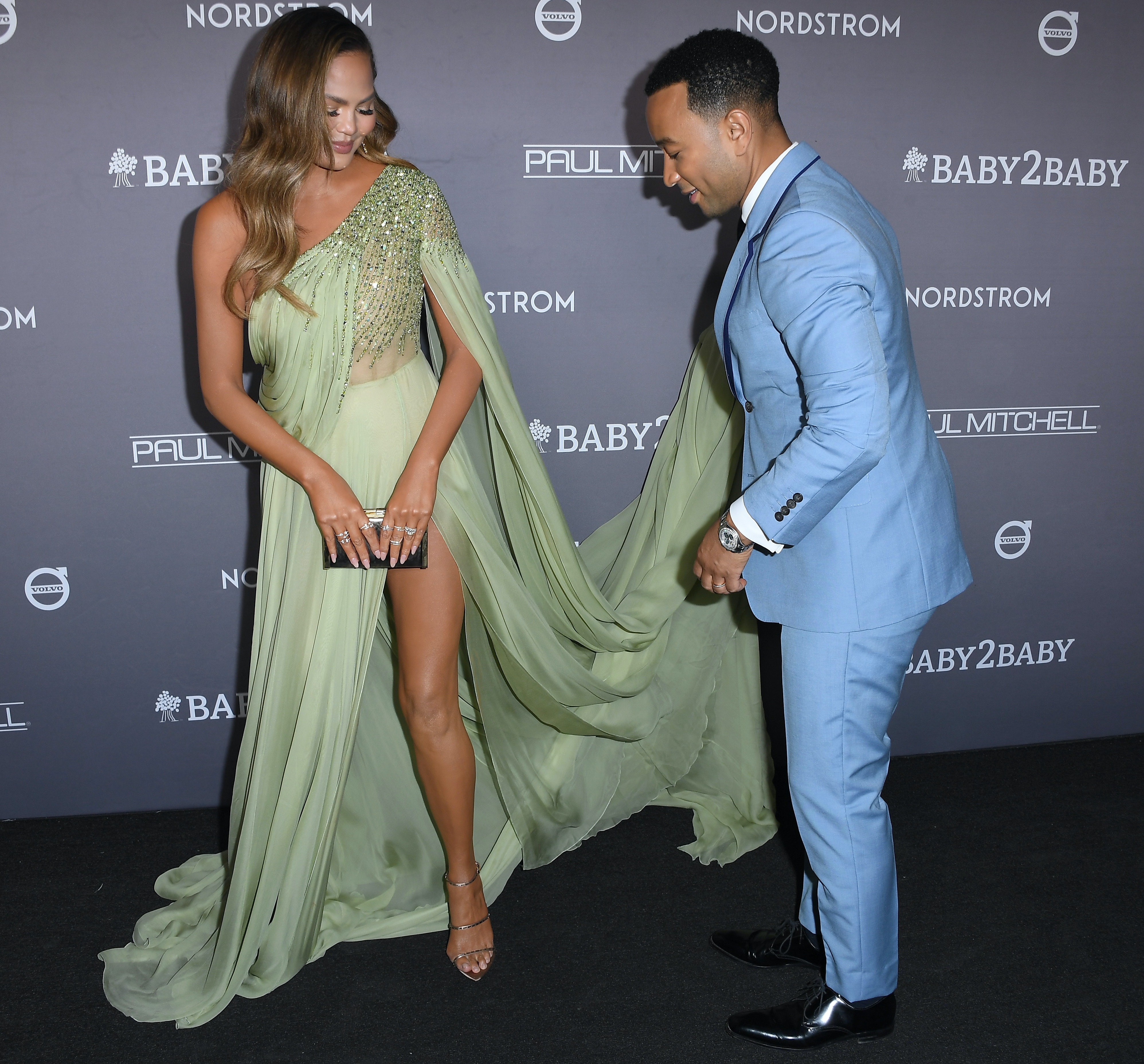 John and Chrissy aren’t just husband and wife, or co-parents, or BFFs — they’re also a team, and John always makes that abundantly clear. After Chrissy said she wanted to cut back on her drinking, John told Cosmopolitan in an August 2017 interview about backing her decision. "I just want to support her," he said. "I want her to be happy and to live the fullest, most awesome life she can, and I want us to do it together. Whenever she sets her mind to anything, I always tell her, ‘I want to support you and help you do it.’"