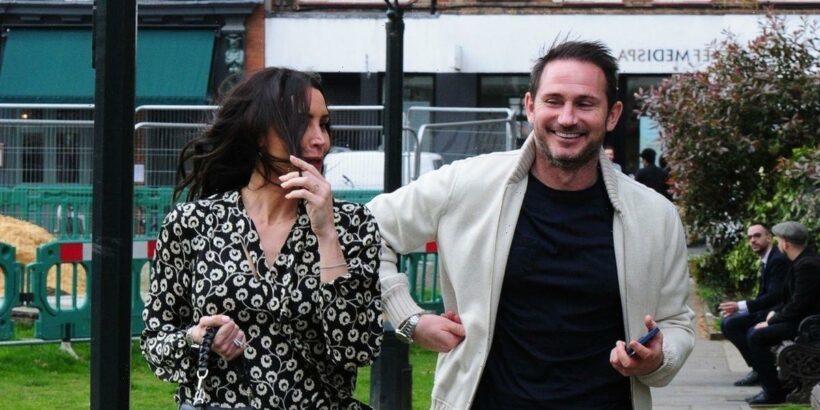 Loose Women presenter Christine Lampard and her husband, former Chelsea footballer Frank looked besotted as they shared a giggle together after enjoying a romantic lunch at The Ivy in London’s Covent Garden on Monday.

The pair, both 43, were seen laughing as they braved the high winds as they left the celebrity-loved restaurant in the UK’s capital city.

Christine looked typically chic in a pair of cut-off blue jeans paired with a patterned black and white shirt, black stilettos and a Louis Vuitton handbag.

She looked lovingly at her husband as she battled to keep her long brown hair from whipping around her face in the wind.

She accessorised with a simple silver necklace which she matched with a silver bracelet, watch and her diamond engagement ring which is said to be worth £120k.

Frank looked decidedly more casual for the outing in a navy T-shirt and chinos, which he teamed with matching trainers and a cream zipped jumper, which he wore open for the occasion.

No doubt the dinner was a welcome break from former Chelsea footballer Frank’s manager duties at Everton FC, which has seen him spend lots of time in Liverpool away from his family.

The couple are proud parents to daughter Patricia, three, and son Freddie, one, and Christine is also stepmother to Frank’s two daughters, Isla, 14, and Luna, 16, from his previous relationship with Spanish model, Elen Rivas.

Christine, who often presents ITV’s Loose Women, and former Chelsea football ace Frank married in a lavish ceremony in 2015 at St Paul's Church in Knightsbridge, after being together for six years and engaged for four.

The couple met when they attended the Mirror’s Pride of Britain Awards in 2009, but Christine described it as an “awkward introduction”.

Speaking on Loose Women, Christine spoke of the fateful meeting saying: "Frank came over to me and said, ‘I watch you on The One Show’”.

She replied: "No you don’t! Who was my guest last night?’ And he was able to tell me!”

"There was an awkward introduction at the party afterwards," she added.

She revealed that after he got her number, he called her after the awards with a withheld number. She picked up the phone and “it was him”.

"I said ‘Wow, you’re keen!’ as a bit of a joke, and we chatted, and he said he enjoyed meeting me and would like to stay in touch.”