If you’re after revelations, you need a wizard like Whicker: CHRISTOPHER STEVENS reviews last night’s TV

The Baby Has Landed

Great interviewing used to be a hallmark of British documentaries. Incisive journalists such as Alan Whicker and David Frost were able to coax confessions and revelations from ordinary people with their questions.

That art appears largely lost today. There’s a trend for ‘point-and-shoot’ documentaries in which the film-maker stays silent or utters just a few mumbled prompts off camera.

In theory, we’re watching honest and unedited footage of real life, free from questions that manipulate the subject. But in reality, people on camera will always try to present their best facade. The interviewer’s job is to persuade them to drop the mask. 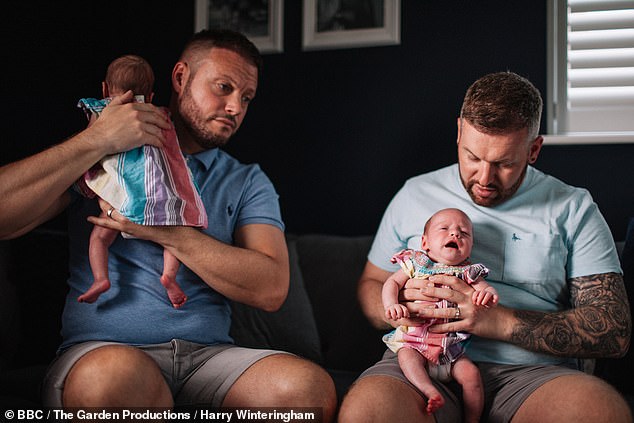 The Baby Has Landed was crying out for strong interviewing, says Christopher Stevens (Pictured: Paul and Craig in the show)

Getting a tricky subject to open up is no different from prising the lid off a can of beans: it can’t be done without a good tin-opener.

The Baby Has Landed (BBC2) was crying out for strong interviewing. This four-part series, studying the impact of a new arrival in the home, has chosen some fascinating couples, including Mo and Syler, who live with the mum-to-be’s mother and two grandads, and Paul and Craig, whose colleague Mel is acting as surrogate and carrying their twins.

Paul and Craig were born performers. They fussed over their French bulldogs and paced the living room floor before Mel visited, like fathers outside the maternity ward in a Sixties sitcom.

But there was no one to ask the awkward questions, such as whether Paul or Craig is the twins’ biological father, and how they persuaded Mel to carry out such a selfless plan.

Balancing act of the night

Balancing act of the night: John Sergeant clung on for grim life as he rode a camel across the sands to the Great Pyramid on Tutankhamun (C5).

‘Thank goodness for that,’ he gasped as he struggled out of the saddle. Lawrence of Arabia he is not.

Surrogacy is legal in the UK, but paying a surrogate, aside from reasonable expenses, is not.

The two dads were not volunteering any difficult information. We learned more about bulldogs Beau and Barclay than their owners.

Mel was also spared the hard questions: had she considered, for example, how she would cope if the babies were born and she didn’t want to give them up? Maybe she had a thoughtful answer for this, based on months of soul-searching during pregnancy, but if she did, we didn’t hear it.

It was equally frustrating to watch Egyptian-born Mo, a hotel-worker when he met his English bride as a teenager, while her family were on holiday six years ago.

His mother-in-law explained that it had taken some persuading to get him to leave Egypt and settle in the UK. We heard nothing about that from Mo, because he was adept at avoiding the camera.

The most we got from him was a mumbled chat with Grandad Tom, captured on a fixed camera, while the two of them were sharing a ciggie in the back yard. And even then, Mo managed to say not very much. What rankled with me was that the film-makers let him do this.

In a selection of flamboyant hats and platform shoes, Helena Bonham Carter was the interviewer as she uncovered her family’s past in My Grandparents’ War (C4).

We saw numerous shots of the actress riding in a car or clumping along corridors in various family homes, and when her interviewees were talking the camera was generally on her.

She always looks posed, as though she knows she is being watched and is not displeased to be the centre of attention.

This is the first of four films in which A-list stars, including Carey Mulligan and Kristin Scott Thomas, investigate the wartime stories that their grandparents never told them.

To have such high-profile names is a coup, but the novelty of a genuinely famous face soon wears off. We needed more focus on the past, and less on the grande dame.