CHRISTOPHER STEVENS reviews last night’s TV: Gregg in a wetsuit? He looked like a basketball stuck in a welly boot

Gregg Wallace revealed the sheer callous cruelty behind a tin of tomato soup, on Supermarket Secrets (BBC1), as he met a grower named Andy in Southport, Lancashire — a man he dubbed ‘the Willy Wonka of tomatoes’.

Willy Wonka? Andy was more like Ivan the Terrible. The trick to producing sweeter toms, he said with brutal lack of feeling, was pain: ‘It’s all about stressing them and tricking them into thinking that they are going to die.’ 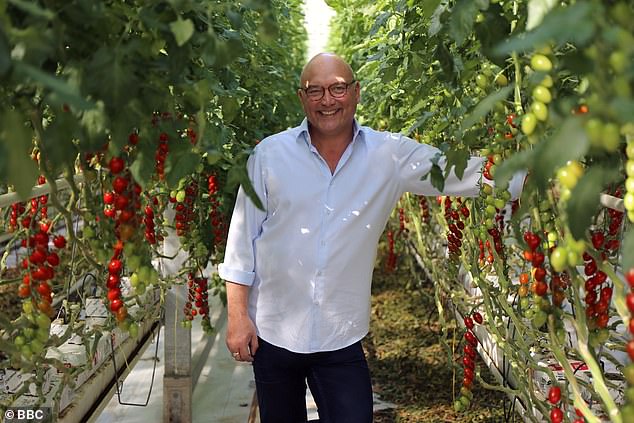 By starving the plants of water, and subjecting them to sudden drops in temperature, he forced them into a state of florid panic. Extra tomatoes sprouted, packed with sugar.

Gregg explored the winter greenhouses, where thousands of plants sweltered under pink LED lights. This seemed a needless risk to take with a much-loved presenter: his perfectly spherical, hairless head, glowing pinker than ever, could easily have been mistaken for a beef tomato.

He was a lot happier tormenting toms in the warm than he was squeezing into a wetsuit. As he set off to gather seaweed on the Scottish seashore, Gregg looked like a basketball stuck in a Wellington boot — and the deeper he waded out to sea, the more noisily miserable he became. 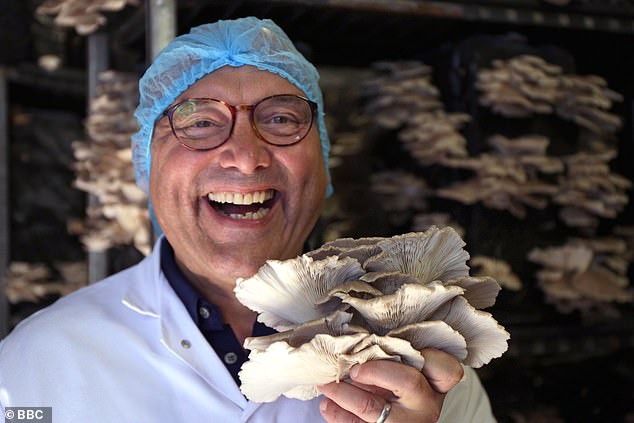 Gregg Wallace checks out some vegan mushrooms, but his attempt to promote ground seaweed flakes left a bad taste in the mouth when it emerged they sell for £34.99 a pot

Ground seaweed flakes can apparently sell for £34.99 a pot. Gregg recommended sprinkling them for flavour on scrambled eggs, but for 20p you can get a pot of table salt from Waitrose. That’s nearly as good and it leaves £34.79 — which could buy freedom for hundreds of cruelly oppressed tomato plants.

Consumer journalist Nikki Fox was taking a less controversial look at the latest food trends, as she taste-tested chocolate with reduced sugar content. ‘Oh, it’s dead lush,’ she muttered through a mouthful, before admitting that because the sugars had been replaced with fats, the choc wasn’t actually any healthier.

Next, she set out to discover whether shoppers are more tempted to buy bags of expensive biccies when they can see stacks of fresh macarons, than when there are only laminated pictures on display. The answer to this test was so obvious, I suspect it was just an excuse to fill five minutes of airtime while scoffing macarons.

Royal role of the night

Royal role of the night: Sophie Rundle was Princess Diana on Urban Myths (Sky Arts). Meanwhile, Emma Corrin is to play her in The Crown on Netflix. Will Di be the Winston Churchill of her generation, with scores of stars giving their version of her?

Still, it was all briskly interesting, which is more than anyone could say for Fiona Phillips’s hour-long corporate advert, Inside Tesco: Britain’s Biggest Supermarket (C5).

The first 20 minutes was a respectful ‘history of Tesco’, emphasising the store’s beginnings as a fruit stall in Hackney, with an interlude about Green Shield stamps, and lots of shots of Fiona’s orange pixie boots marching along the aisles.

It felt like a bad documentary for schools from the Seventies, and it got worse when two families were sent out to compare the experience of shopping in Tesco (‘Look, Mummy! Free apples!’) and the dreaded ‘German discounters’ (mentioning no names, boo hiss).

When we reached the Nineties, and a Tesco Extra in Stockport was found to be in breach of planning regulations, there was sad piano music on the soundtrack to emphasise how tragic this was.

The rest of the show was mostly retired supermarket executives, sitting in floral-print armchairs in their front rooms, reliving past excitements. The advent of Clubcard, and ordering sticky labels by the million for those price-marking guns that predated bar codes . . . ah, heady days.