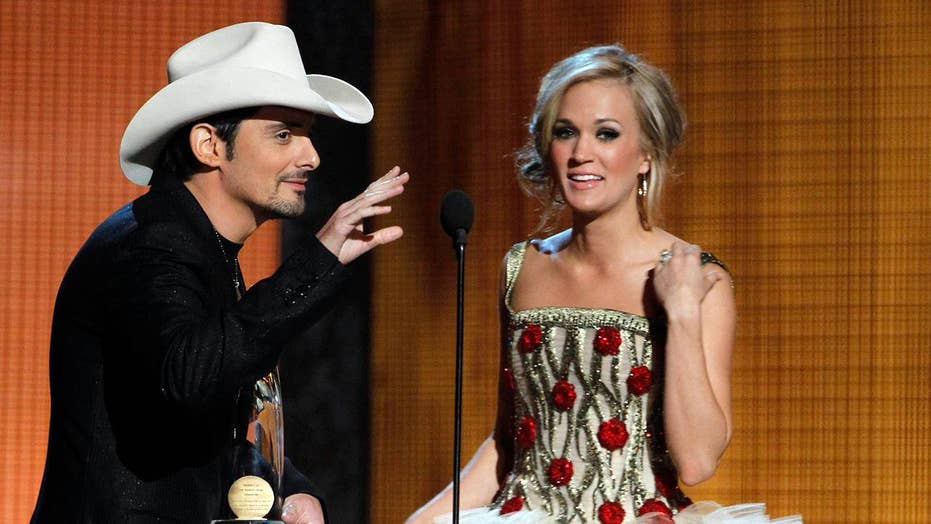 A night of big moments at CMA Awards

With co-hosts Carrie Underwood and Brad Paisley once again at the mic, this year's show will likely be no different.

CMA AWARDS: EVERYTHING YOU NEED TO KNOW ABOUT COUNTRY MUSIC'S BIGGEST NIGHT

From political jabs to peculiar outfit choices, here's a look at five of the most jaw-dropping moments in CMA history.

The CMA hosts got political in 2017, poking fun at President Trump's unusual Twitter habits. Before introducing the next award presenters, Paisley began to strum Underwood's hit single "Before He Cheats," surprising her with a twist.

“It's fun to watch it that's for sure, 'till little 'Rocket Man' starts a nuclear war,” Paisley continued, as Underwood joined in, “Maybe next time he'll think before he tweets.”

Social media was abuzz after Miranda Lambert performed "To Learn Her" during the 2017 CMAs — with many suggesting the star gave an eye roll intended for ex-husband Blake Shelton, who was not present at the show that year.

"Loved @mirandalambert eye roll when she sang ‘if you take her, you might hate her and be left with just a ray,'" LYRIC magazine tweeted at the time.

Rumors have long circulated that Lambert cheated on Shelton during their 4-year marriage, which ended in 2015. Shortly after, Shelton confirmed his relationship with "The Voice" co-star Gwen Stefani. Stefani, 46, filed for divorce from musician Gavin Rossdale in August 2015 after 13 years of marriage. At the time, "The Voice" costars claimed they weren't dating. After weeks of speculation, the pair finally confirmed they were in a relationship in November 2015.

MIRANDA LAMBERT'S BLAKE SHELTON SLAM: 'I GOT THE HELL OUT OF OKLAHOMA'

And Shelton and Lambert have exchanged plenty of public jabs ever since.

Country superstar Reba McEntire turned heads as she grabbed the mic to perform "Does He Love You" at the 1993 CMAs donning a plunging red velvet gown.

The crowd "oohed and aahed" during McEntire's performance — and it wasn't entirely because of her impressive vocal range.

More than a decade later, people are still commenting about "that dress."

“I didn’t win an award, but I did make the front page of the paper the next day!”

“It was very revealing and I didn’t know that!” McEntire told People in 2016. “I had only had two fittings with [designer] Sandy Spika. One was at our office and I said, ‘I think you need to fill some more stuff in!’ When I put it on in the dressing room at the Grand Ole Opry for the show, I thought, ‘Maybe it’s just the lighting in here.’ And when I walked out on the stage, I heard the audience go ‘Oooooh!’ And I thought, ‘Dang, I look good!'”

McEntire can't help but grin now when she looks back at the iconic moment.

“I didn’t win an award, but I did make the front page of the paper the next day!” she joked.

The CMAs welcomed a special guest to the ceremony in 1991: President George H.W. Bush.

The president and first lady Barbara Bush attended the Nashville ceremony. They're the first presidential couple in history to ever attend the event live, Taste of Country reports. The former president even gave a heartwarming speech.

"It’s great to be here with friends and with music I love. Barbara and I come here as fans. Country music gives us a window on the real world and when I want to feel a certain surge of patriotism or turn nostalgic or even when I need a little free advice about Saddam Hussein I turn to country music," he told the crowd, according to One Country. "Country songs do say a lot about life. And sometimes, and this is true, in the Oval Office, I read a sentence, right under the glass on the right-hand corner of my desk and it says’ if we’re going to see a rainbow, we will have to stand a little rain.'”

“Barbara and I will always be grateful for what the country music family did for our troops in the gulf and for their families. You sure helped them stand a little rain, so when Desert Storm went by they could see that magnificent rainbow. You know it’s easy to see why America loves country music, country music loves America.”

Olivia Newton-John shocked the country music world when she picked up an award for Female Vocalist of the Year during the 1974 CMAs, defeating country music darlings Dolly Parton, Loretta Lynn and Tanya Tucker.

“Some howled that country’s identity was being diluted by middle-of-the-road, homogenized country-pop,” an exhibit at Nashville's Country Music Hall of Fame and Museum states, according to The Washington Post.