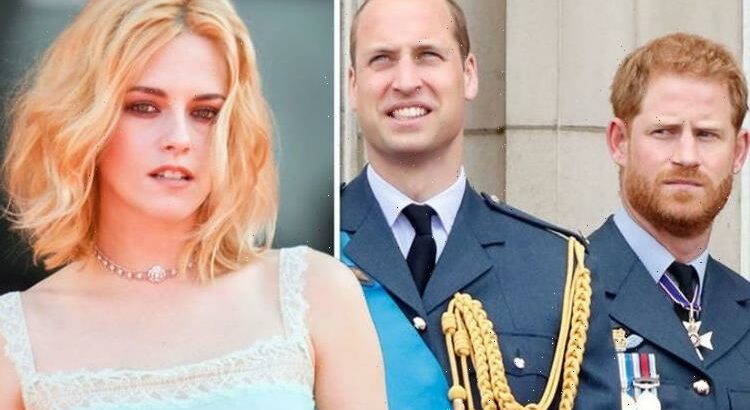 Prince Harry and Prince William are “examples of two sides” claimed Kristen Stewart as the actress played their mother Diana Spencer in the film which was released last year. The Twilight star has spoken out about her thoughts on the monarchy and the relationship between the two royal brothers.

Speaking in a new interview with Vogue Australia magazine, the 31-year-old explained that she believed the world of royalty is a “complicated issue”.

The Spencer actress believed that both Harry and William mirror their mother, Diana, Princess of Wales in various ways.

She claimed that while the brothers are on “two sides” neither of them are “right or wrong” as they both continue to spread positivity throughout the world.

Her comments come after claims of a feud between the Duke of Cambridge and the Duke of Sussex was widely reported last year.

There has been much made of the rift between the two brothers with their frosty relationship reportedly sparked by William’s concerns over Harry’s fast-developing relationship with Meghan Markle ahead of their royal wedding in 2018.

The tension reportedly gained momentum – with Harry claiming his brother was “trapped” within the royal system during a bombshell interview with Oprah Winfrey after quitting as a senior royal.

Since leaving the UK in early 2020, Harry has reportedly only seen his brother twice – at the funeral of Prince Philip and at an unveiling of a statue of their late mother Princess Diana.

“It’s a complicated issue. Diana’s legacy is walking and talking.”

Speaking about Harry and William, she commented: “They’re both very clearly examples of two sides. And I don’t think either is right or wrong…

“I think that both of those boys function so positively in the world.”

She added: “I see her in them and – it’s funny, it’s a weird word to use – as a fan, as somebody who’s really been obsessively watching [Diana], it’s really nice to see.”

Prince Harry left as a senior member of the Royal Family in 2020.

He and his wife Meghan stepped back from the royals and moved to California, where they now live with their two children.

Prince William is still an active member of the Royal Family alongside his wife Kate Middleton, Duchess of Cambridge.

Spencer is a 2021 film and is inspired by Princess Diana’s decision to end her marriage to Prince Charles and leave the British royal family.

For her portrayal of Diana, Stewart has been nominated for the Golden Globe Award and Critics’ Choice Movie Award for Best Actress.

Addressing her role, Kristen admitted it was “hard” to portray the late royal.

“It was a hard job, but it was so much fun; she’s such a beautiful person to think about,” she told the same publication.

“This imagined skin was something that made me feel amazing,” Kristen went on.

“And that was kind of a surprise because her life was, in a nutshell, quite sad, but the joy in the centre of it is why it’s so sad. She had something to fight for that is so spectacular.”

For more including the full cover story visit – www.vogue.com.au