Coronation Street will highlight the important issue of male suicide when Aidan Connor (played by Shayne Ward) tragically takes his own life.

In episodes to be screened the week of May 7, viewers will hear that Johnny Connor has discovered his son’s body in the bathroom of his Victoria Street flat, after Aidan failed to turn up for work at the factory.

As the news of what Aidan has done spreads, his devastated family and friends try to come to terms with the shock of their loss and begin to question why they hadn’t spotted any signs that he was struggling to cope with life. 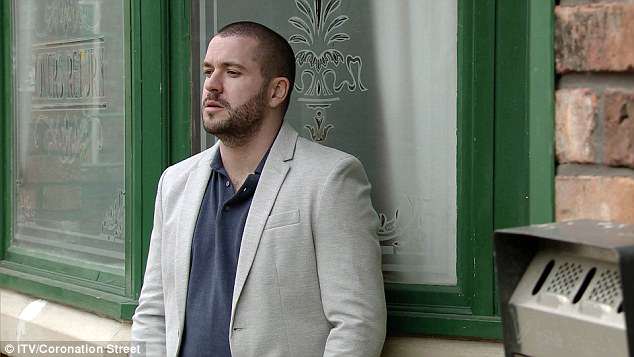 Heartbreaking exit: Coronation Street will highlight the important issue of male suicide when Aidan Connor (played by Shayne Ward, above) tragically takes his own life

Viewers will last see Aidan on screen on Monday May 7th when he goes to see Eva at the cottage where she is living after giving birth to baby Susie.

Bidding farewell to his ex-fiancee, he tells her he loves her and she is better off without him.

He is then seen closing his eyes in the Rovers as his dad’s leaving party gets underway.

His final scene will see him crying alone on his sofa. No element of the suicide will be shown on screen. Shock: In episodes to be screened the week of May 7th viewers will hear that Johnny Connor has discovered his son’s body at his Victoria Street flat, after Aidan failed to turn up for work at the factory

Johnny makes the devastating discovery at the beginning of an hour long episode on May 9th.

He finds a note before running into the bathroom calling out for his son.

His sister Kate says she will never forgive him for taking his own life while Sally Webster’s sister Gina Seddon says that Aidan’s suicide was borne out of desperation, reports The Sun.

Shayne’s character Aidan recently discovered Eva was pregnant with his child, after she ditched him at the altar following the emergence of his affair.

The character has already agreed to give the infant up for adoption to Toyah Battersby and her partner Peter Barlow.

Actor Shayne Ward, the writers and production team, worked closely with charities Samaritans and CALM to ensure the storyline was handled sensitively and realistically. 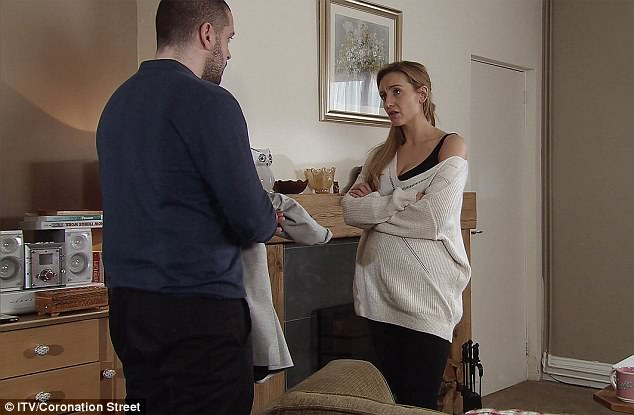 Heartache: Viewers will last see Aidan on screen on Monday May 7th when he goes to see Eva at the cottage where she is living after giving birth to baby Susie, before returning to a family party at the Rovers

Shayne, 33, who joined the soap in 2015, said: ‘I am honoured to have been trusted with a storyline like this, it shows the confidence that Kate and the team had in me to be able to play it.

‘When you get given a storyline like this it is a decision that is not taken lightly, I have played it with as much honesty and truth as I could. I am very proud of what I have done in my three years on the show and on this storyline in particular.

‘Aidan is an ‘everyman’ figure, he is someone men can identify with, which is important in telling this story.

‘We hope that anyone who recognises something of themselves in Aidan, will realise they can, and really should, talk about how they’re feeling.

‘Talking could have helped Aidan to turn his life around. It could have brought him relief from what he was going through.

‘This is what his loved ones would have wanted. Suicide is a very permanent response to what are usually temporary problems. 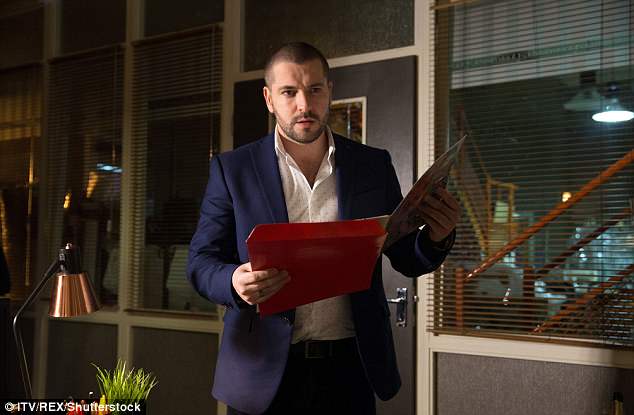 Tragic:His final scene will see him back at his flat alone. No element of the suicide will be shown on screen

‘We all know someone who has maybe felt like Aidan did, someone who found it hard to talk and we have all heard stories like Aidan’s when it was too late, when people looked back and wished they had spotted the signs, but it isn’t always possible.

‘If we can encourage someone who is feeling low, who is having the sort of thoughts Aidan was having, to realise they need to talk, then we have achieved what we set out to with this story.’

X Factor champion Shayne revealed the torment of a suicide in his own family helped him play out the heartbreaking scenes.

He told The Sun: ‘I think a lot of people know someone, a friend or someone in their family or hearing of someone who has taken their own life.

‘So for me, I just drew upon an honest truth and how I would feel in that situation.’ 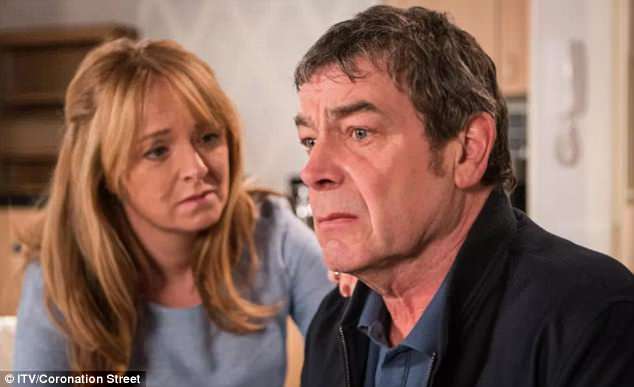 Broken: Johnny makes the devastating discovery at the beginning of an hour long episode on May 9th

He added that being placed in the position of acting out Aidan’s death, he couldn’t shy away.

Coronation Street Producer Kate Oates said: ‘Suicide is the biggest killer of men under 45 in this country. With 84 men taking their lives each week, we quite simply can’t afford to not talk about it.

‘Aidan’s story, bravely and brilliantly tackled by Shayne Ward, is designed to give people who hide their feelings of desperation a chance to start a conversation, letting someone know what they’re going through.

‘Through this story, we want to assure anyone who feels suicidal that there is always someone who wants to listen and support you: whether a friend, family member, or one of the brilliant charities we have been working with throughout this story. We want to tell people that however bleak they are feeling, there is always another way.’ 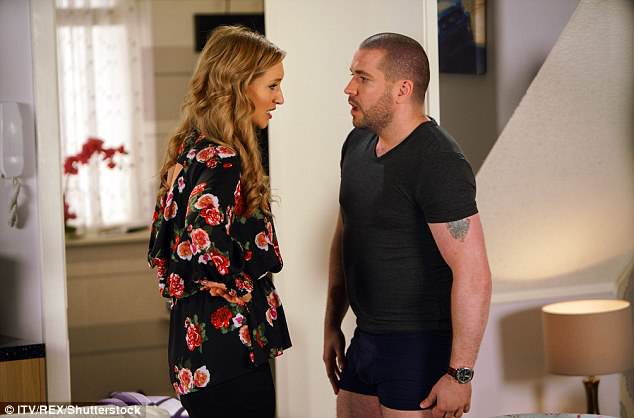 Outrage: Shayne’s character Aidan recently discovered Eva was pregnant with his child, after she ditched him at the altar following the emergence of his affair

Ruth Sutherland, CEO of Samaritans, said: ‘We were pleased that Coronation Street invited us to work with them on Aidan’s storyline. Suicide is clearly a very sensitive topic and one that presents some distinct challenges for producers of soaps. This is why Samaritans publishes media guidance and works with programme makers.

‘Soaps can play an incredibly powerful role in increasing people’s awareness and understanding of difficult issues. Viewers will see the devastating impact of suicide and the effect that it has on families – it’s never the case that others would be better off without you.

‘By illustrating the dangers of staying silent when it feels like life’s challenges are overwhelming, we hope others who are struggling will be encouraged to reach out for support. And, if viewers are worried about someone else, we hope it will inspire them to be brave and open up a conversation. 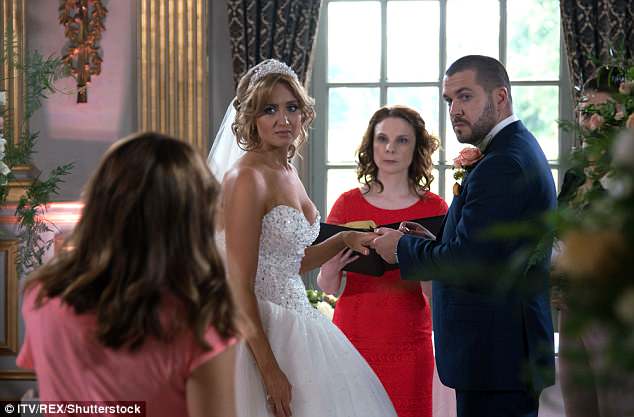 Ruined; Their wedding day was interrupted when Aidan’s infidelity was revealed

‘You won’t make things worse, but you could start that person on the road to recovery.’

Simon Gunning, CEO of CALM, said: ‘Coronation Street is doing vital work in highlighting such an important issue with this storyline.

‘Suicide is the single biggest killer of men under 45 in the UK, where three in every four suicides are male. The reasons for this are many and complex, but at CALM we focus on the cultural and societal aspects, including the pressures men face and how societal expectations can limit help seeking when life gets tough.

‘Working with Coronation Street has allowed us to engage a huge audience in the devastating effect of suicide, while providing a platform to highlight the help that is available for those in need of support.’

Coronation Street has tackled the emotional subject of suicide before, with Ken Barlow’s wife Janet poisoning herself in 1977.

And in 2014, Hayley Cropper, who had terminal cancer, overdosed before dying in her husband Roy’s arms.

For confidential support call the Samaritans on 116123 or visit a local Samaritans branch, see www.samaritans.org for details. 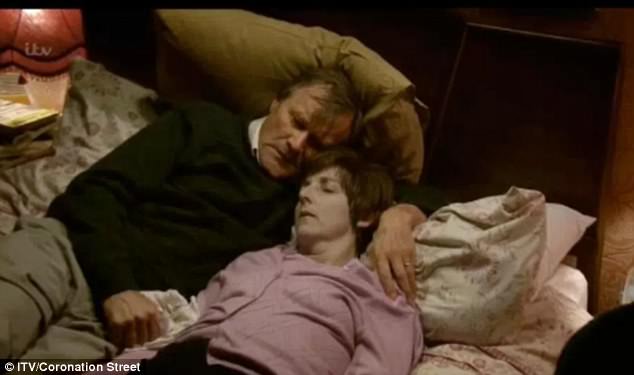 Hard-hitting: In 2014, Hayley Cropper, who had terminal cancer, overdosed before dying in her husband Roy’s arms