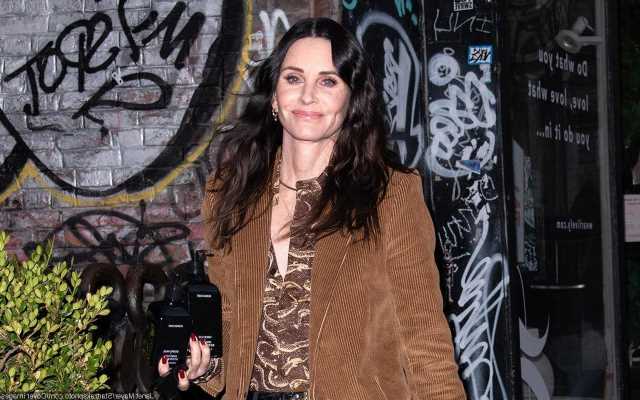 In a video shared on Instagram, the Monica Geller depicter can be seen hiding behind an orange couch at the Warner Bros. Studios in Burbank, California while some visitorrs are posing for pictures.

AceShowbiz –Courteney Cox knows exactly how to make fans happy. The actress, who’s best known for playing Monica Geller on “Friends” from 1994-2004, delighted a number of Warner Bros. Studios visitors by photobombing their pictures at the show’s iconic fountain.

On Wednesday, November 30, the 58-year-old shared a video of herself before giving fans the surprise. “I am working at Warner Brothers and I thought this is a good time for me to surprise Friends’ fans and photobomb their shots,” she kicked off the clip.

The video later sees some people sitting on an orange couch at the Burbank, California studios where the show was filmed. When they posed for a picture, Courteney popped up from behind the couch.

After getting their phones back from the photographer, the fans saw Courteney posing in the background of their images. They were all surprised by the actress’ appearance, with one of them crying happy tears.

The Alabama native then stopped hiding to greet the fans with hugs. In the caption of the post, she asked her followers, “Don’t you hate a photo bomber? #friends.”

This was not the first time Courteney surprised fans of the hit NBC sitcom. In October last year, the mom of one served coffee from the Central Perk set at the Warner Bros. lot.

In an Instagram video, Courteney could be seen serving beverages to guests, and while she masked up and received a visitor pass while entering the lot, she couldn’t hide her identity while chatting with fans. She was also seen ringing up customers at what appeared to be the lot gift shop, all to the soundtrack of Dolly Parton‘s classic “9 to 5”.