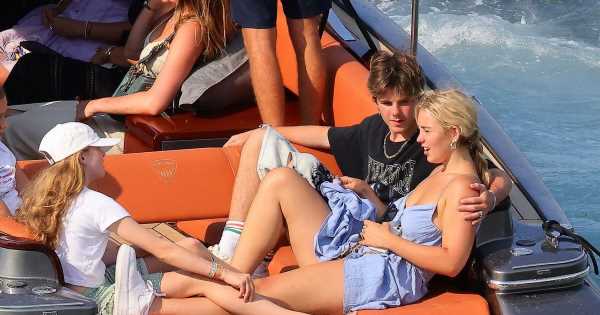 Cruz Beckham was seen packing on the PDA with his girlfriend Tana Holding in front of his famous family while they holiday in Italy.

David, 47, and Victoria, 48, have been enjoying a sun-soaked trip with their two youngest children, 17 year old Cruz and Harper, 11, aboard a lavish yacht, as they moved on from visiting Croatia to Italy this week.

The Beckhams enjoyed a day out on the yacht, as well as heading to grab a bite to eat at world-renowned restaurant Lo Scoglio on the Amalfi Coast, where Victoria greeted former Duchess of York, Sarah Ferguson, 62.

Aboard the vessel, Cruz looked smitten as he wrapped an arm around his girlfriend of a few months and placed plenty of tender kisses on her lips and cheek as his younger sister Harper sat opposite them.

The youngest Beckham brother looked cool and casual in a black t-shirt and white shorts which he paired with white sneakers and pulled-up socks.

His blonde girlfriend looked sweet in a blue playsuit as she relaxed alongside her boyfriend.

The pair officially got together around March of this year, not long after Cruz's split from former girlfriend Bliss Chapman.

Cruz was said to be devastated following the split which came around 18 months after they started dating.

Victoria is said to be good friends with Bliss' mother, Rosemary, and that's how Cruz and Bliss thought to have met.

A source has told OK! in March that we could see Victoria trying to stay civil with Rosemary, while she puts her son Cruz's feelings first.

The source said: "Victoria will always put her family first. It isn’t awkward between them and if Cruz wasn’t happy with it then she would cut all ties.

"They will stay friends. Cruz isn’t asking her to pick sides but she will naturally do that."

The source continued: "Cruz is a really lovely boy and would never ask that of his mum but she will slowly start to tiptoe away. That’s just her being a mum."

Cruz's older brothers, 19 year old Romeo and 23 year old Brooklyn were nowhere to be seen as their family enjoyed their trip.

Newly-married Brooklyn has just enjoyed a holiday to Italy with his new wife, Nicola Peltz.

It was a belated honeymoon that came a few months after they tied the knot in lavish nuptials at Nicola's family's £76million home in Miami.

During their romantic break, the loved-up couple were seen enjoying a boat day with friends on a yacht, as well as visiting plenty of restaurants in St. Tropez.