The second season of 13 Reasons Why is bringing back all of the teens from the first season… as well as some new kids. Perhaps the most notable of these Liberty High newbies (at least in the first few episodes) is Cyrus, an eyeliner-wearing rebel whom Tyler Down meets in Mr. Porter’s compulsory counseling class. Given all the speculation about Tyler this season, and how mysteriously quickly the school’s outcast photog bonds with the punk kid, many fans are probably wondering what Cyrus is up to. So, who is Cyrus in 13 Reasons Why Season 2, and what does his appearance mean for Tyler’s storyline this season? Let’s go over everything we know.

Spoiler alert: This post is going to go over details from the first three episodes of 13 Reasons Why Season 2. Nothing after Episode 3 will be spoiled here. Cyrus is still a super mysterious new character in the first few episodes of Season 2, but it is clear that he will be playing a major role in the show. It might be most helpful to go over everything that we know about Cyrus in a list form:

The part of Cyrus is child star Bryce Cass’s first major acting role. Before 13 Reasons Why, Cass appeared in action movies like Battle Los Angeles and Line of Duty, as well as 2016’s Cruel Intentions sequel. But he is probably best known for being one of the kids featured on Are You Smarter Than a 5th Grader?

The first thing that Tyler notices about Cyrus is that he is a pretty skilled drawer, complimenting some of the doodles in his notebook.

3. He is not into authority.

Cyrus’s defining character trait seems to be his disregard for authority. He immediately derides Mr. Porters (admittedly very poorly named) counseling class, and bonds with Tyler over their shared roles as outcasts.

4. He always sticks up for the underdog.

When Netflix first announced the addition of Bryce Cass as Cyrus, they described the new character as "an unexpected champion of the downtrodden." Since Tyler is basically as downtrodden as they come at Liberty High, it makes sense that Cyrus would gravitate towards him. Hopefully, Cyrus’s friendship will have a positive effect on the otherwise friendless Tyler.

5. He got his rebellious spirit from his father.

Tyler also meets Cyrus’s dad, who is very similar to his son. They both talk about how important it is to stick it to the man (I’m paraphrasing). It’s clear that Cyrus was raised to be a rebel.

Cyrus also introduces Tyler to his group of all-black-wearing friends, including his sister Mackenzie (played by Chelsea Alden). It seems like Tyler hits it off with Mackenzie pretty quickly, which could mean that the two bond even more later in the season.

7. He may be a good or a bad influence on Tyler.

At the end of Season 1, pretty much every 13 Reasons Why fan was assuming that Tyler would shoot up the school in Season 2, since the final episode showed him building an arsenal of firearms in his bedroom. However, that does not seem to be happening… at least not yet. Perhaps the fact that Tyler now has a friend like Cyrus could be keeping him from doing anything with all those guns. Then again, there was a sketchy scene in Episode 3 in which we see Cyrus and Tyler wiring something in his basement. 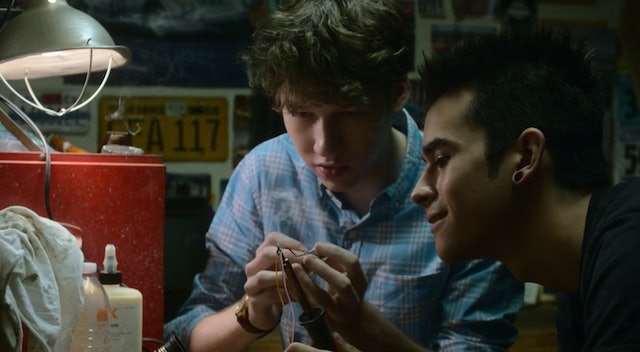 Ummm, what exactly are they working on? Cyrus hides it from his sister when she asks what is going on, which makes it seem even more sketchy. I guess we will just have to wait and see if Cyrus is actually a good friend or a bad influence.