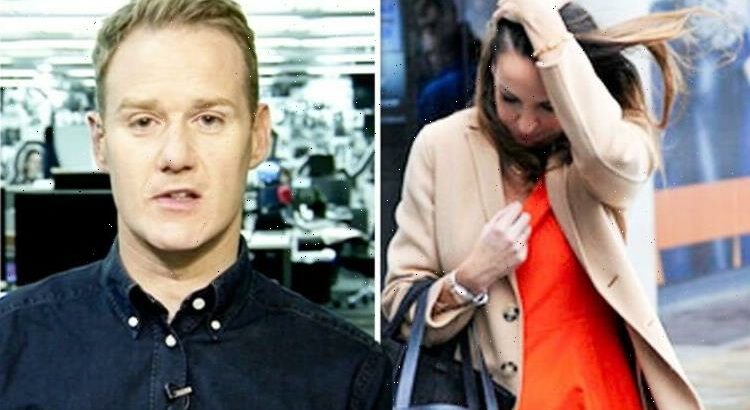 Dan Walker will soon bid farewell to his regular slot on the BBC Breakfast sofa – a role he has held since 2016. The news of his departure comes just months after Louise Minchin, 53, quit the news programme in September.

The 45-year-old broadcaster has opened up about his exit in a new interview.

The dad-of-three is set to leave the BBC for Channel 5 where he will replace Sian Williams on the network’s daily news slot.

But Dan has admitted that one person, in particular, was left slightly taken aback by the news of his exit from Breakfast.

Sally Nugent, 50, a former sports presenter, has since taken the reins and began fronting the show earlier this year.

The BBC Breakfast veteran admitted that his co-star was upset about the news of his departure.

When asked what the reaction has been to his decision, Dan said: “It’s been lovely, apart from [co-host] Sally [Nugent], who is a bit upset.”

The broadcaster was also quizzed on who could potentially replace him on the show.

Dan revealed that he has not been made aware of who would be taking his place.

Asked who might take over, Dan added to The Mirror: “I have no idea. I don’t know my leaving date.”

The BBC Breakfast host previously presented Football Focus from 2009 and 2021.

In his new role for Channel 5, he will present the relaunched flagship news bulletin 5 News.

The broadcaster added he would also present “a range of new programming on the channel”.

Meanwhile, viewers have questioned who would be the best person to front BBC Breakfast following Dan’s exit.

Some fans have requested weather forecaster Carol Kirkwood as the front runner.

Laura commented: “Of course, Carol could replace you!”

Nicky said: “Not sure we’ve had a weather presenter take the sofa? This opens up bringing the mighty Carol Kirkwood in!”

“Thinking about Dan Walker leaving @BBCBreakfast. Opportunity for a shake-up! Like, have a woman sit on the left side of the screen?” Johnny added.

Others opted for regular presenter Jon Kay, as Marion remarked: “Jon Kay @BBCBreakfast is superb he is a fantastic broadcaster and presenter and should take over from Dan Walker when he leaves.”

BBC Breakfast airs daily on BBC One at 6am.