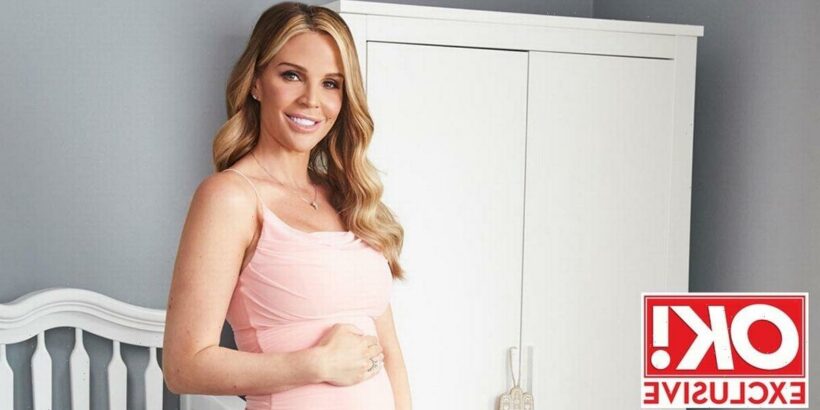 In her exclusive chat with new!, pregnant mum of four Danielle Lloyd hinted at a sentimental name choice for her baby girl that'd come from husband Michael O'Neill's side of the family. But the pair are having problems narrowing their list down to just one name.

Despite her fifth pregnancy going “really well”, Danielle exclusively told new! that her anxiety is at an all-time high and that she’s been feeling “emotional” as she knows this will be her last baby.

The mum of four, who’s expecting her first daughter, explained: “I have my off days. Yesterday I had really bad anxiety and I don’t know why.

"I’m not stressing over anything specific, but it just comes on and I’ve got to take really deep breaths. I hate it as it feels like my chest is really tight. I’ve suffered from it for such a long time.”

Adding to Danielle’s stress is the fact that she and husband Michael O’Neill can’t decide on a name for the new baby. And the couple aren’t helped by family members who are keen to share their opinions.

“We’ve got a shortlist but either Michael doesn’t like it or someone in his family doesn’t like it, or my mum doesn’t like it. We’re just going to have to decide when she gets here and it’ll have to be our choice,” Danielle said.

“Michael’s nan was called Rose, so he really wants to incorporate that into the baby’s name, which obviously I’ve agreed to.

"My whole life I thought that if I ever had a girl, I’d call her Lily. But now I’ve been put off it. I thought maybe we could do Lily-Rose but it’s two flowers!”

Danielle, 37 admits that her mum, who she describes as her “best friend”, is the worst when it comes to chiming in with her preferences.

Keep up with all of Danielle Lloyd's latest baby news by signing up to OK!’s daily newsletter.

“My mum says things like, “You can’t call her that, that’s not nice!” when I suggest stuff.”

Whatever she ends up being called, the baby, who’s due at the end of November, will have four doting big brothers in the form of Archie, 10, Harry, nine, George, eight and three-year-old Ronnie.

Although Ronnie did take a while to be convinced about having a baby sister. “He definitely didn’t want the baby at first!” Danielle admits. “But now he just can’t wait.” Good luck, Danielle!