Before Marvel took over the superhero movie genre and normalized a slightly sunnier insight with the world of the Avengers, Christopher Nolan’s Batman trilogy embraced the dark side for its portrayal of one of the most iconic heroes. You won’t find much humor or post-credit scenes in these movies, but they’ve left an impact for a reason. The second movie in the trilogy, The Dark Knight, was particularly critically acclaimed, and any fans will soon have a chance to reminisce about simpler days for the superhero world. The Dark Knight is coming to IMAX for its 10th anniversary, and the news honestly put a smile on my face.

Starring Christian Bale as Batman and Heath Ledger as the Joker, the 2008 film The Dark Knight followed Batman / Bruce Wayne joining forces with Police Lieutenant James Gordon and District Attorney Harvey Dent to fight against organized crime in Gotham City. Ledger’s Joker disrupts the mission, kicking off a streak of complete chaos in the city. Ledger’s menacing performance captivated viewers, but his death six months before the film’s release nearly overshadowed hype about the film. Ledger ultimately won an Oscar posthumously for his work in The Dark Knight, which makes watching the movie just as heartbreaking as it can be terrifying. 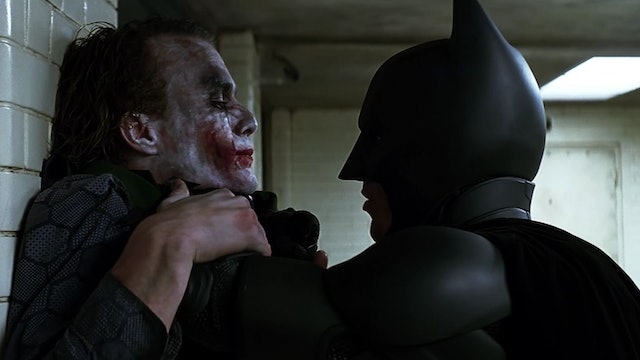 In honor of the movie’s milestone anniversary, The Dark Knight will run at four select IMAX locations for one week, putting Nolan’s use of IMAX cameras in certain scenes to good use. Entertainment Tonight reports that the film will screen once a day during the week at L.A.’s AMC Universal Citywalk, New York’s AMC Lincoln Square, San Francisco’s AMC Metreon, and Toronto’s Ontario Place Cinesphere. While IMAX seems like an ordinary cinematic feature nowadays, The Dark Knight became the first big-budget movie to utilize IMAX’s 70mm film for stunt and action sequences. 2008 feels like yesterday to me, but it’s facts like these that prove otherwise. Do you feel old yet?

Ledger’s transformative performance still has the ability to get fans and critics talking. Although many speculated that the Joker’s dark nature influenced Ledger’s January 2008 death from a mix of prescription drugs in his system, his sister Kate Ledger has insisted that he enjoyed playing the chillingly mischievous character. In 2007, Ledger’s co-star Bale emphasized how committed Ledger was to the part, saying:

Debuting as a sequel to 2005’s Batman Begins, The Dark Knight received a total of eight Oscar nominations. The final film in Nolan’s trilogy, The Dark Knight Rises, wasn’t as universally loved, and although the ending hinted at a spinoff film exploring the origin story of Batman’s sidekick Robin, this was the last time Nolan handled a superhero story. The Marvel Cinematic Universe debuted its first film, Iron Man, in the spring of 2008, and by the time The Dark Knight Rises premiered, five other Marvel films had launched. Understandably, it looks like the superhero genre was getting a little too crowded for Nolan’s tastes, but in this case, I’d take quality over quantity.

Tickets for the IMAX screenings of The Dark Knight go on sale on Friday, July 20. The limited engagement in theaters will begin on Friday, Aug. 24.