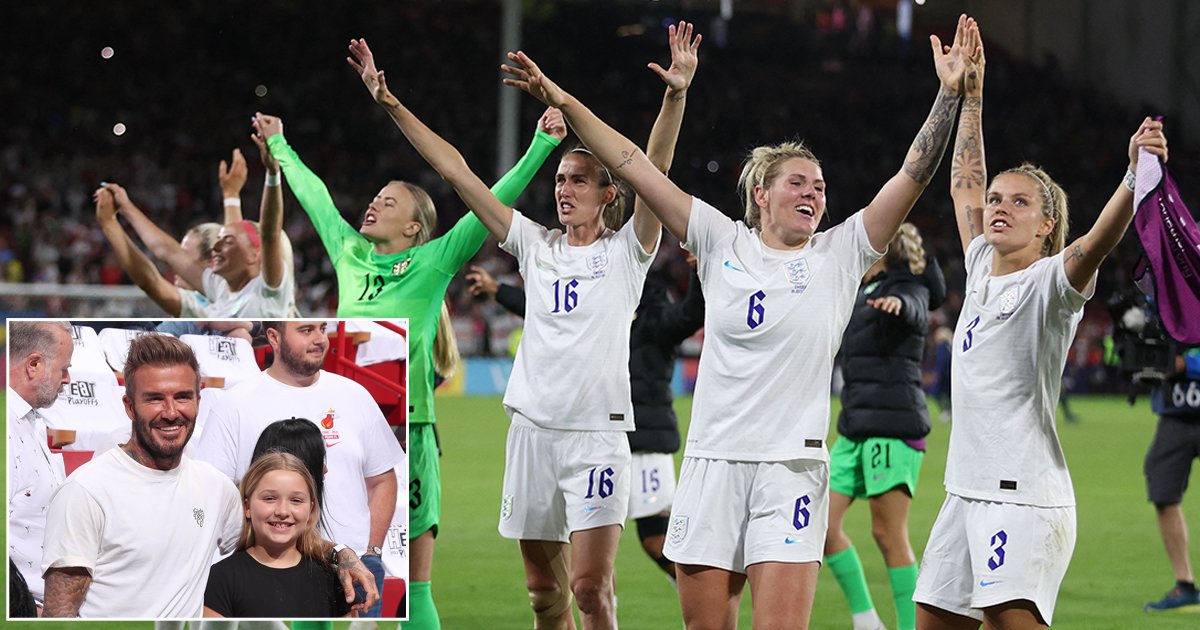 The former England men’s captain joined the country in celebrating the Lionesses’ victory in reaching the finals of the 2022 Women’s European Championship following a rousing 4-0 win over Sweden in Sheffield.

Goals from Beth Mead, Lucy Bronze, Alessia Russo and Fran Kirby mean the team will head to the sold-out Wembley Stadium for the final on Sunday.

Writing on his Instagram story following the win, Beckham, 47, wrote: ‘What a night, congratulations to the girls.’

He also shared his ‘favourite picture on a special night’ which showed forward Rachel Daly dancing in an England cowboy hat on the pitch.

Hours before the semi-final, the former Manchester United player shared a video message wishing the team the best of luck and revealing how much of a fan his daughter Harper, 11, who he shares with wife Victoria, is a fan of the Lionesses.

‘Hey, Lionesses, it’s David here. I just wanted to send you a message, firstly to say congratulations on an incredible tournament so far, it’s been so uplifting, it’s been so exciting, and it’s been so inspiring,’ he said.

‘And for me personally, you know I have a daughter, so for her to be inspired by you girls and your performances has been incredible.’

‘It really has uplifted the whole country.’

‘So thank you for inspiring her and good luck girls.’

Harper is known to share her dad’s love of the game as David previously shared a video of the youngster showing off her football skills as a child to mark International Women’s Day.

However, she’s not the only Beckham child to have a passion for the sport as David and Victoria’s son Romeo, 17, currently plays for Miami-based team Fort Lauderdale CF.

Other stars sending congratulatory messages to the Lionesses, include Gary Lineker, Wayne Rooney and Prince William.