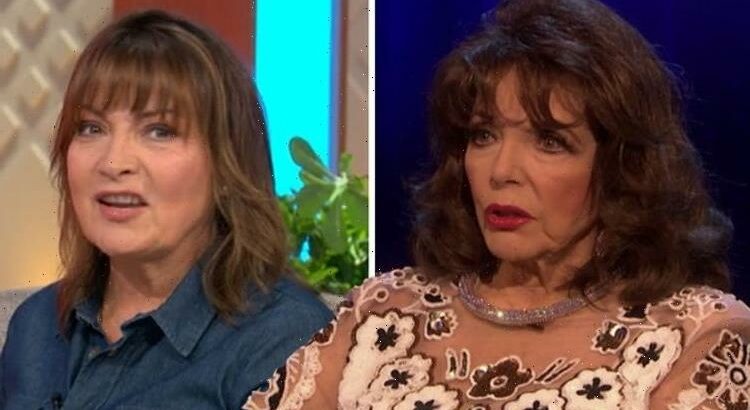 Dame Joan Collins has reached out to ITV’s Lorraine, and its host Lorraine Kelly, after the National Television Awards last night. This comes as Line of Duty’s Martin Compston appeared to snub Joan by not standing up for her.

Joan was a special guest at the NTAs last night as she presented the award for Best Serial Drama at the bash.

The national treasure wore a glamorous ruffled gown for the occasion and received a standing ovation when she stood up to present the gong.

However, on Lorraine earlier today, the ITV hosts discussed how Martin Compston hadn’t stood up during her entrance.

In a clip on the night, Martin can be seen with his arms crossed sitting down while others cheered the star.

“The music that they played, I don’t think he was a fan.”

Reacting to the clip, Lorraine then said: “I know he’s sitting down.

Dame Joan then took to Twitter to address the rumours with a warning to Lorraine.

She posted a tweet explaining why Martin wouldn’t have stood up for her.

Alongside this, Joan captioned her post: “Dear @lorraine @itv @itvnews please don’t start #feuds where there are none. #stirringthepot.”

As fans of Martin will know, the Line of Duty star is a supporter of Rangers rival Celtic Football Club.

Posting below, one penned: “Dame Joan, classy as always.”

“You looked amazing as usual dame Joan, stole the show as per,” a second wrote.

A fourth replied: “There is a reason you’re a Dame.”