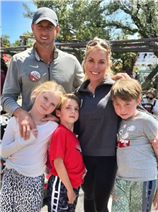 Last week, we reported that Dr. Jen Armstrong and Ryne Holliday have broken up again.

That was not a surprise, given how open Jen had been about her troubled marriage on The Real Housewives of Orange County.

The two have been married for nearly eight years.

In addition for filing for a legal separation, Jen is seeking full legal and physical custody of the couple’s three children.

Dr. Jen Armstrong and Ryne have 10-year-old twins and a nine-year-old son.

She wants full custody of all three, with Ryne having visitation.

Notably, this is not their first breakup, as the two parted ways last year … but quickly reconciled and vowed to work on their marriage.

In March. the two of them listed their Newport Beach property.

Their asking price was $5.9 million.

Now, they have reconsidered their options, and instead of selling the house, will simply rent it … for $20,000 a month.

What’s interesting is that Jen and Ryne had already purchased a new home.

At the time of the acquisition, she told Andy Cohen that she and her husband were looking for a “reboot” with the new house.

The new residence is in Dr. Jen’s childhood neighborhood, which she described as “a dream” homecoming for her.

Then, last month, Jen took to Instagram to reflect upon how filming for The Real Housewives of Orange County had some unexpected benefits.

In other words, being on camera brought them face-to-face with some of their issues and prompted them to have some important conversations.

This is not dissimilar to what Emily Simpson described happening with her and her own spouse.

“It just made us say, ‘We have to separate or solve it.’ So we’re in therapy,” Dr. Jen shared earlier this spring.

“We’re in solving phase right now and it’s getting better,” she said at the time. “At our core, we both want to be together.”

Jen continued: “We both see the good in each other. We just need some tools to get past this.”

Obviously, despite their considerable efforts, that did not work out.

Earlier this month, however, Jen and Ryne showed off their coparenting with a family trip to Disneyland, showing their kids that separation doesn’t have to be scary.

These breakups can be scary for children, even at ages like 9 and 10.

It’s unclear what the final straw may have been, but it’s possible that they simply were unable to work things out.

It is similarly unclear what their new housing situation may be.

They could still be renting their old home, or one of the two of them could end up moving back in.

Reality TV can make or break relationships, and one of the factors is viewing themselves from the outside and through the perspectives of viewers.

Just as Emily and Shane realized how they were getting along — or not — Jen and Ryne had their own realizations.

But it’s not going to fix a relationship. It’s not couples counseling, and filming a show like this can do more harm than good in some cases.