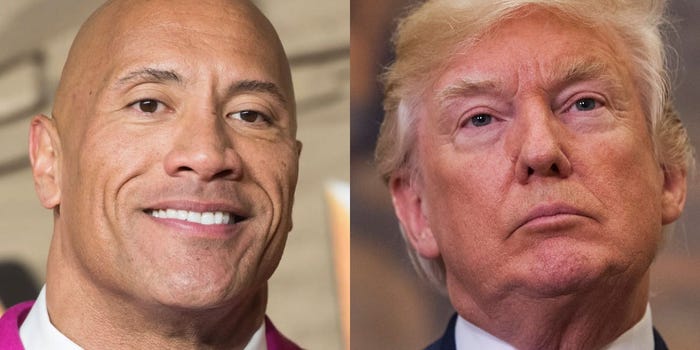 Johnson's caption was a reference to a tweet from Trump posted on November 15, in which the president said he refused to accept the election results despite Insider and other major media networks calling the race for President-elect Joe Biden.

"He only won in the eyes of the FAKE NEWS MEDIA," Trump wrote. "I concede NOTHING! We have a long way to go. This was a RIGGED ELECTION!"

Despite the Trump campaign's effort to challenge election results in a series of lawsuits, many of them have been denied, dismissed, or withdrawn. International election observers from The Organization of American States that witnessed the race also reported that they saw no instances of fraud or voting irregularities, despite his repeated claims.

Trump's ongoing refusal to concede has divided his party, with a growing list of Republican lawmakers urging him to accept defeat while others have reportedly advised him to continue fighting the results.

Though Johnson is usually private about his political beliefs, he publicly endorsed Biden and Vice President-elect Kamala Harris in September 2020, sharing his stance with his 15 million Twitter followers.

"As a political independent & centrist, I've voted for both parties in the past," he wrote. "In this critical presidential election, I'm endorsing @JoeBiden & @KamalaHarris."

The announcement marked his first public endorsement of a political candidate.

Months earlier, the "Jumanji" actor made an impassioned plea for a change in leadership following George Floyd's death.

"Where is our compassionate leader who's going to step up to our country who's down on its knees, and extend a hand and say, 'You stand up, stand up with me because I got you. I hear you, I'm listening to you,'" he asked in the video.

He continued, "'And you have my word that I'm going to do everything in my power, until my dying day, my last breath, to do everything I can to create the change that is needed, to normalize equality because Black Lives Matter.' Where are you?"

Johnson also wrote that the United States is "crippled" and "on its knees, begging to be heard and pleading for change."