Labour peer Lord Andrew Adonis, who has undergone a startling conversion from cerebral centrist to radical Remoaner, has also been going through dramatic changes in his personal life.

I can disclose that Lord Adonis has split up with his wife, Kathryn, after more than 20 years.

‘It’s very sad, and the break-up has been particularly hard on Kathryn,’ one of their mutual friends tells me. ‘There are great sensitivities involved.’ 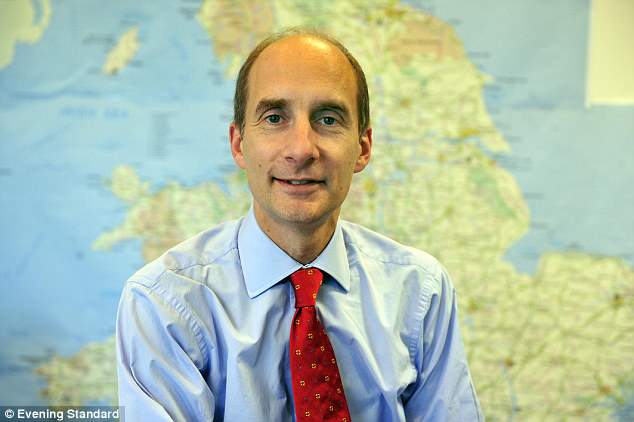 Labour peer Lord Andrew Adonis has split up with his wife, Kathryn after more than 20 years. There are ‘great sensitivities involved’

Adonis, 55, declines to comment, but a close associate confirms that he and Kathryn, who have a son and a daughter together, have quietly divorced.

They met while Kathryn was his student at Oxford University, where he was teaching as a research fellow, and they married in 1994.

Known for his other-worldliness, the young Adonis once left his room at Nuffield College so deep in thought that he walked into a pond in the middle of the quad.

Kathryn, who is a close friend of Boris Johnson’s wife Marina, is an executive at a multi-national company, where she uses her maiden name, Davies.

Andrew was brought up by his father after his mother walked out on the family when he was three.

He was awarded a local education authority grant to attend a private boarding school. He went on to Oxford and was later made a Nuffield fellow.

Following periods in academia and journalism, he joined Tony Blair’s Downing Street policy unit and later became a minister after being elevated to the House of Lords.

Since the EU referendum, he has kept himself in the headlines by working to reverse the result.

When he quit a quango in protest at Brexit earlier this year, he claimed Theresa May had become a voice of ‘extreme Right-wing nationalism’.

Winkleman, 46, had the former Bake Off host, 83, in fits of laughter at the Fortnum & Mason Food and Drink Awards after she admitted her cooking skills have not improved a jot since they started working together. 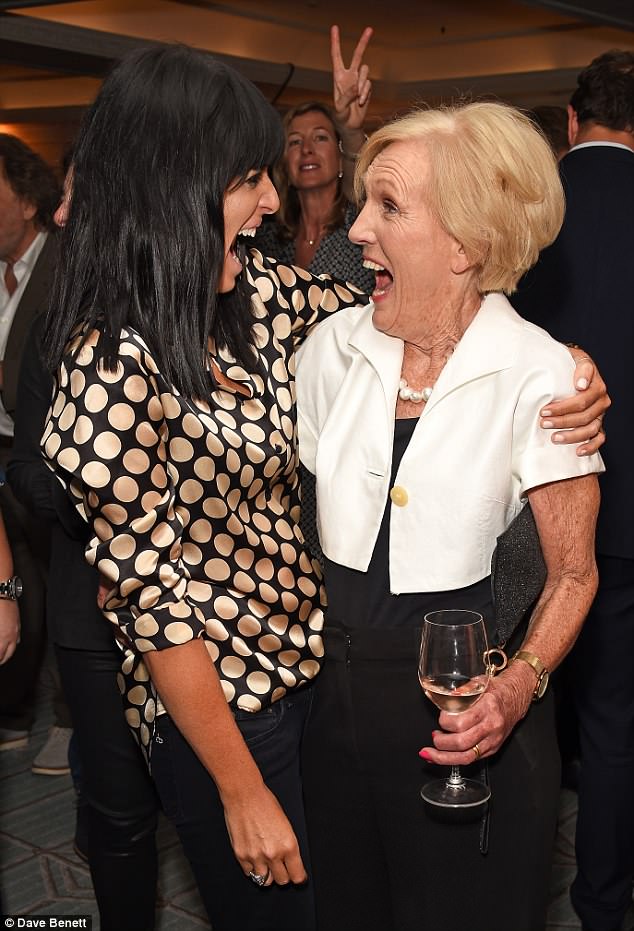 Claudia Winkleman and Mary Berry attend the Fortnum & Mason Food and Drink Awards on May 10, 2018 in London

The real talking point of the night, however, was the television chef Lorraine Pascale, who arrived with a new boyfriend, above.

He is dapper businessman Dennis O’Brien. ‘We met in the gym,’ Lorraine, 45, tells me. ‘We’re both really into fitness, and we both love food.’ 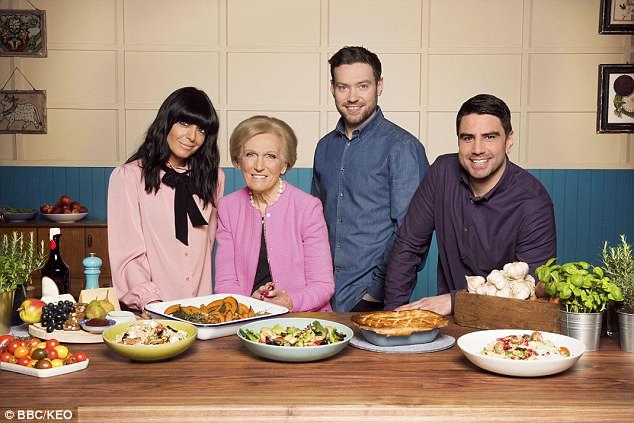 It’s the season of Anglo-American alliances. Just one week before Meghan Markle marries into the Royal Family, U.S. art consultant Meredith Dunn joined one of this country’s most extraordinary aristocratic dynasties. 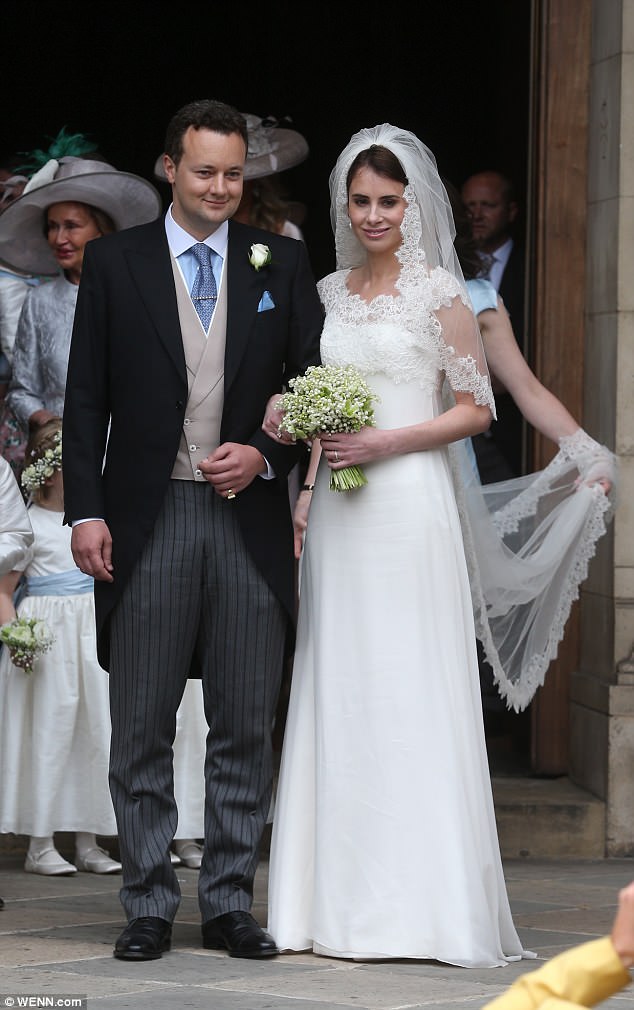 Meredith, 36, tied the knot yesterday with the 38-year-old Marquess of Bristol at the Brompton Oratory in South Kensington (above).

Fred Bristol was joined by his elder sister Lady Victoria Hervey, 41, who wore a figure-hugging dusky pink dress (below). Their late father, Victor, a thrice-married playboy known as The Reptile, was jailed for jewel theft and had a brief career as an arms dealer.

Fred inherited the title in 1999 from his older brother, John, who squandered £30 million on drugs, lost the family seat, Ickworth House in Suffolk, and died aged 44.

Yesterday, the priest, Father Julian Large, alluded to the clan’s history in his homily, saying no one could ‘accuse the Herveys of being boring or predictable’. 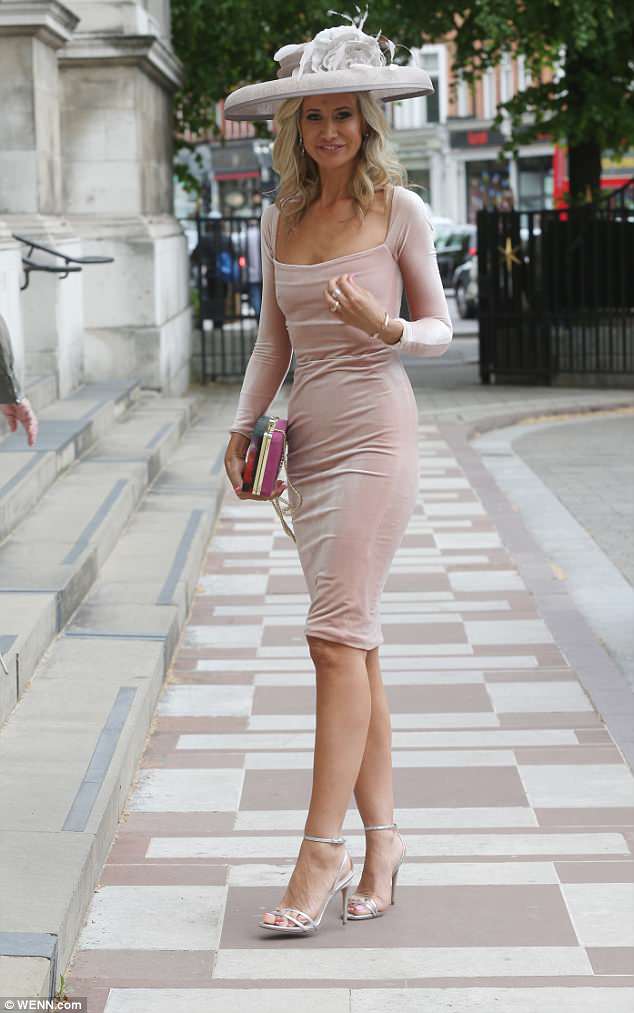 Fred Bristol was joined by his elder sister Lady Victoria Hervey, 41, above, who wore a figure-hugging dusky pink dress at the wedding in London

When the Queen’s confidant Harry Herbert separated from his popular wife, Chica, last autumn after 25 years of marriage, friends wondered how he could ever replace her.

Now, I have the answer. Old Etonian Herbert, 59, whose father, the 7th Earl of Carnarvon, was Her Majesty’s racing manager, is enjoying a sizzling romance with Irish chef Clodagh McKenna. At 42, she is 12 years Chica’s junior. 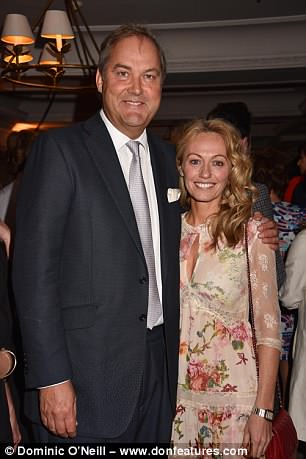 Old Etonian Herbert, 59, whose father, the 7th Earl of Carnarvon, was Her Majesty’s racing manager, is enjoying a sizzling romance with Irish chef Clodagh McKenna. At 42, she is 12 years Chica’s junior

Irish Clodagh, pictured with the gregarious Harry, was introducing him to chums as her ‘boyfriend’ at a London arty this week.

‘We met at Fortnum’s a few months ago,’ Harry tells me.

‘One of the biggest movers and shakers in the equestrian world, Harry is the younger brother of the Earl of Carnarvon, who owns Highclere Castle, where Downton Abbey was filmed.

His brother-in-law, John Warren, is the Queen’s racing manager.

He is, however, having to work on his culinary technique: ‘I can make scrambled eggs and do all the basics, but when you have Clodagh in your life you feel the pressure in the kitchen.’

Chica, of course, is a cordon bleu caterer herself. Out of the frying pan, into the fire, Harry?

Despite the unseasonably warm weather in some parts of the country recently, Britain’s top male model, David Gandy, is adamant that men should not remove their shirts in public.

‘I’m in the park every morning with my dog Dora and I wouldn’t take my top off even if it was 30C,’ he tells me. ‘You should respect people in a park as much as you would for a wedding.’

Gandy, 38, who is courting criminal lawyer Stephanie Mendoros, 32, adds: ‘When it’s hot, I wear material that is appropriate for the sun — thin materials, linen suits.’

HIghly paid Gandy, incidentally, shot to fame wearing only a pair of white swimming trunks in an advertising campaign for Dolce & Gabbana.

Habitat founder Sir Terence Conran has endured years of sniping after he fell out with Stephen Bayley, with whom he worked at the Design Museum in London. ‘I still admire him, but I’m afraid he’s behaved in such a way that I could never work with him again,’ Conran tells me at a private party in Kensington.

‘He really gets above himself and he’s not good with delegating to people.

‘I won’t be friends with Stephen again. He wrote a very bitter book about me which I had to stop from being published.

‘Stephen has a very large ego.’

Rock guitarist Brian May is still selling out stadiums around the world with Queen, but the guitarist has no chance of making his debut at next year’s Glastonbury Festival.

Its creator, Michael Eavis, 82, tells me that poodle-haired May, 70, is ‘not invited’ because of his outspoken criticism of the badger cull to reduce the spread of bovine tuberculosis in cattle. Somerset farmer Eavis, who keeps 400 dairy cows and supports the cull ‘in certain circumstances’, adds of May: ‘He’s a danger to farming. He doesn’t care about the badgers — he doesn’t know anything about it at all. He’s a total p***k’.’ And Eavis is normally such a peace-loving old hippy.

While Prince Charles and the Royal Collection Trust are selling wedding souvenirs, one member of the Firm is taking a more hands-on approach.

‘The wedding is fabulous for business,’ says the 27-year-old, whose mother, Marina Mowatt, caused a scandal in the Eighties when she became pregnant outside marriage. Zenouska was manning the stall of Halcyon Days, for whom she does public relations.

Sadly, she was far too discreet to reveal if any of her relatives had taken advantage of a £10 discount on £35 Harry and Meghan mugs.

What will we see next? The Queen flogging china at the gates of the palace?

Sir Bruce Forsyth’s widow, Wilnelia, is taking a leaf out of her late husband’s books by going into television. ‘I’m broadcasting for the Royal Wedding,’ the former model, 60, tells me. ‘I’ll be talking about tea and British traditions. I’m really excited about it.’ Puerto Rico-born Lady Forsyth will be working for a foreign station, but how long before she’s asked to appear as a contestant on Strictly?

Meghan Markle has chosen a gospel group and a teenage cellist to perform at the Royal Wedding, but appears to have overlooked the Queen’s official composer.

Judith Weir, below, right, who is the first woman to be Master of the Queen’s Music, tells me she has not been invited to contribute to the big day. 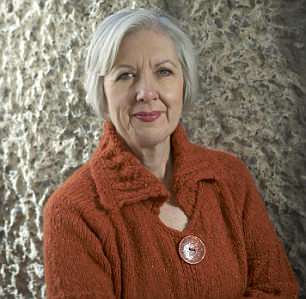 Choosing her words carefully, she says: ‘I haven’t been asked to compose a piece, but I would have done.’

Two works by her predecessor, Sir Peter Maxwell Davies, were performed at Prince William and Kate Middleton’s wedding in 2011.

The Queen’s wedding in 1947 started with a specially composed fanfare by Sir Arnold Bax, who was then Master of the King’s Music. Weir’s role is meant to involve composing music for such celebrations.

Speaking at the Royal Philharmonic Society awards, she adds, diplomatically: ‘It isn’t technically a State occasion. It’s going to be a very big event, and I’m sure the couple have put a lot of thought into their musical choices.

Prince of Darkness Peter Mandelson, who once mused ‘it may be that the era of pure representative democracy is slowly coming to an end’, tends to pay particular attention to China these days. He is president of the Great Britain China Centre, which has just paid for nine MPs to visit the dictatorship at a cost of up to £3,000-a-head, courtesy of two commercial sponsors. Perhaps Mandy will convince the Chinese to invest in his secretive consultancy, Global Counsel?

When the much-missed Isabella Blow was fashion director of Tatler, she ‘discovered’ the celebrated designer Alexander McQueen and milliner Philip Treacy, as well as the models Sophie Dahl and Stella Tennant.

I can disclose that Dennen, whose first edition comes out later this month, has appointed Harriet, below, as his fashion features editor. The smart set’s talking about … Fashion It girl Harriet Verney, above

‘She’s just the right mix of East End cool, fashion heritage and aristocracy,’ one of her friends gushes.

Harriet, 25, grew up at Hilles, the Arts and Crafts house near Painswick in Gloucestershire, built by the grandfather of Isabella’s husband, Detmar Blow.

Harriet’s mother, Lavinia Delves Broughton, is Isabella’s sister and her father, Harry Verney, is a lumberjack.

They divorced when she was small, so she and her brother and mother moved to the Blows’ estate.

Troubled Issie, who suffered from depression, died in 2007 at the age of 48 after poisoning herself with weedkiller. ‘Harriet is the daughter Issie never had,’ claims a pal.

A regular at London’s very trendiest parties, sharp Harriet is no ‘air head’.

Although she was expelled from the £29,000-per-year boarding school Westonbirt, she went on to create her own magazine, set up an online shop and star in an independent film by the age of 19.

Before Tatler, she was online editor at Love Magazine.

She seems to share her aunt’s eccentric sense of style. Harriet once recalled: ‘Issie would pick me up from school in those amazing hats and then my mum would arrive in a U.S. army boiler suit.’