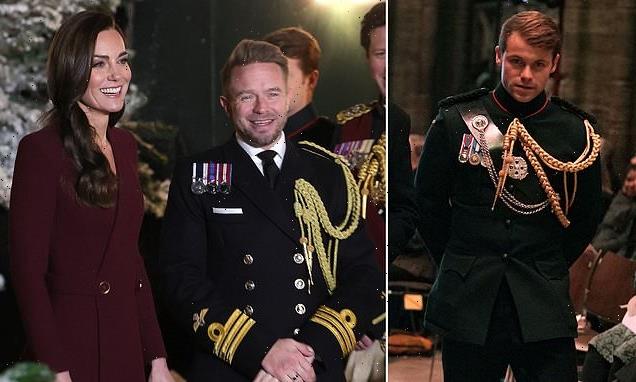 EDEN CONFIDENTIAL: Move over kilt-clad hunk! Royal fans swoon as dashing new equerry to Queen Camilla and officer in The Rifles who raised £100,000 for wounded servicemen catches the eye at the Princess of Wales’s Westminster carol service

The King’s equerry, who has won a legion of female admirers, may find that some of them switch their thoughts elsewhere.

That’s because Captain Ollie Plunket, the new equerry to Queen Camilla, attracted much attention at the Princess of Wales’s carol service at Westminster Abbey.

A kinsman of the 9th Lord Plunket, Ollie has a robust physique similar to Thompson’s but, at 28, is a decade or so younger — and, unlike Thompson, is unmarried.

While still in his teens, Plunket, now an officer in The Rifles, embarked on a solo motorbike ride from Argentina to Alaska, covering 24,500 miles and raising more than £100,000 for wounded servicemen. There were some vivid experiences along the way.

‘He survived a rock fall,’ a friend tells me, adding that Plunket also checked into what he thought was a cheap hotel.

The mirrors on the bedroom ceiling, adds the chum, led him to conclude that it offered other services.

She confirmed her status as Prince William and Catherine’s favourite pop singer by crossing the pond to sing Still Falling For You when the royal couple hosted the Earthshot Prize in Boston.

But it’s not just air miles Ellie Goulding is stacking up.

Newly filed accounts disclose that Miss EG Properties, of which Ellie, 35, is sole director, owns £4 million in ‘investment properties’, while Paper Planes Promotions, her media company, also has assets of £4 million plus.

No trouble, then, for Ellie in sending a partridge in a pear tree for her true love — husband, Old Etonian art dealer Caspar Jopling, whom she married in 2019.

Kate’s new gym may cause a fit!

Banking heiress Kate Rothschild has finally won a year-long battle with neighbours to build a basement gym at her £3.5million home.

Kate, 40, and entrepreneur boyfriend Paul Forkan, 33, landed in hot water with residents over fears of flooding.

Half a dozen of Kate’s neighbours in South-West London objected to the proposed development, saying they already had to pay up to £1,200 a year in home insurance premiums because of a high flood risk in the area.

Kate wants to splash out on a basement complete with a TV and media room, home office and study at her Edwardian property

Her first application for planning permission for the basement last November was rejected, but Richmond Council has now given the project the green light.

Lulu died of cancer last month aged 60 and the funeral was held at St Andrew’s Church in Mells, Somerset, where war poet Siegfried Sassoon is buried.

‘Not from the past you’ll come, but from that deep, Where beauty murmurs to the soul asleep.’

Cosmo was previously married to Amanda Aspinall, who was found dead in 2019 aged 61. She was the daughter of late gambling tycoon John.

Comedian Peter Kay will be laughing at the fate of touts who snapped up tickets for his big comeback tour, hoping to make a killing.

After the comic announced his first tour in 12 years, there was an online queue of tens of thousands of fans desperate to buy tickets. However, Kay extended the initial run of 22 dates multiple times and tickets are more freely available.

The cheapest for last night’s gig at the O2 in London — now the first of a monthly residency — were being sold on the Viagogo site for £32 — £3 less than their face value. No doubt the touts will be the butt of a few of his jokes…

Her mother, Chica, recently married King Charles’s Coronation planner, the Duke of Norfolk, and now Frankie Herbert has a bulletin about her own love life.

For the uninitiated, ‘pansexual’ means someone who ‘is attracted to all people regardless of gender identity or sex’.

Frankie, 26, whose father, Harry Herbert, is the Earl of Carnarvon’s brother, explains of her pansexuality: ‘It is valid and has provided me with a deeper understanding of myself.’

She adds: ‘I don’t find a specific gender or sex more or less attractive, but rather the person beneath all of that.’

Frankie — who once strutted her stuff down the catwalk for Queen Elizabeth II, the only time Her late Majesty ever attended a fashion show — was previously romantically linked to rock star Sting’s child Eliot Sumner.

Ade Edmondson seems to be taking his role as Ebenezer Scrooge a little too seriously.

The Young Ones star, 65, is appearing in A Christmas Carol at the Royal Shakespeare Theatre in Stratford-upon-Avon — and his seasonal cheer is non-existent concerning pupils on school trips entertaining themselves with electronic devices in the stalls.

‘To the bored teenager on his iPad during the matinee today,’ thunders Edmondson online.

‘Next time the school asks if you want to go to the theatre, please say “No”. ‘You don’t want to be there and we don’t want you to be there. It’s a win/win situation.’

The smart set’s talking about… Dellal’s big step back

Her label Charlotte Olympia created shoes for everyone from the Duchess of Sussex to pop superstar Taylor Swift until her Mayfair shop closed due to financial problems back in 2019.

And now Charlotte Dellal is stepping back in style. I hear the 41-year-old granddaughter of the late billionaire property tycoon ‘Black’ Jack Dellal is relaunching Charlotte Olympia in the new year.

She’s been whetting the appetite of devotees by sharing photographs of a new jewel-encrusted version of her celebrated £395 Kitty Slippers.

‘A litter of Kitty’s coming your way soon,’ she teases.