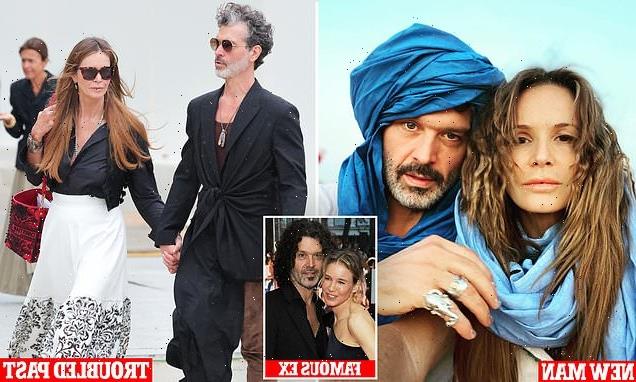 Not her usual type! Elle Macpherson’s new musician boyfriend battled a heavy heroin addiction and was accused of failing to pay child support

Elle Macpherson has dated some of the world’s most famous – and richest – men but she’s bucked the trend with her newest boyfriend who has admitted how a heroin addiction once derailed his life.

A 53-year-old rocker known best for having performed with Eric Clapton, Bramhall is also known in the music world for dating Hollywood actress Renee Zellweger for seven years before they split in 2019.

But it’s his very public battle with heroin that has earned the musician headlines in the past, with the father-of-two once giving a detailed interview about his downward spiral. 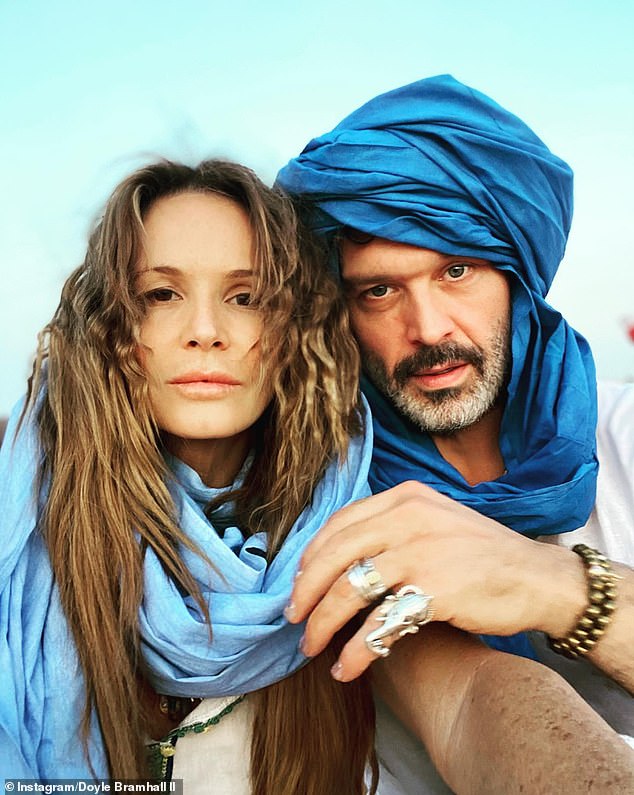 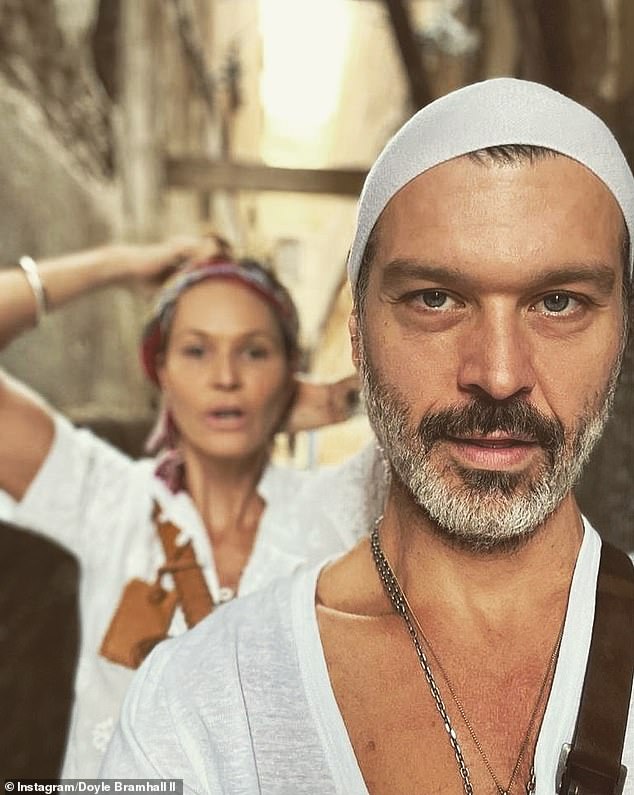 In an interview in 1996, Bramhall talked openly about his addiction, saying it was ‘very short and very crazy…it was sort of like a hurricane that sucked me up for a second and spit me out hard’.

‘During the time that I was doing it, I was going through changes and getting to the point where I was so fed up with it all that I had to stop.

‘It was just insane. But it did end. Which I’m very happy about. But I don’t wake up every day and think about it.

‘I hardly ever think about it until it’s actually brought up. Then I go “oh yeah, I forgot. I did do that. I was told I did that”. It’s far enough away I can sort of be in the third person about it and have a different perspective about it, and see that the changes I’ve made are tremendous in a way.’

Bramhall was also dragged into the spotlight again years later when he was accused by his first wife, Susannah Melvoin, of failing to provide child support for the couple’s two daughters. 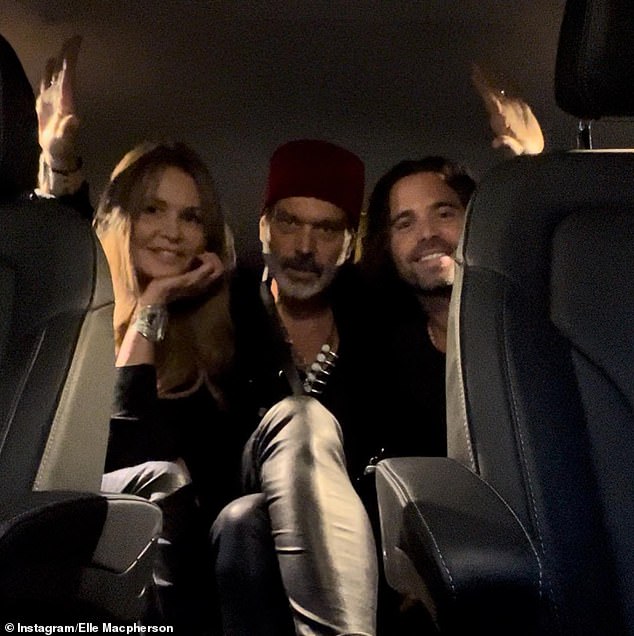 The couple (with unknown friend right) are believed to be holidaying together in the Middle East. Bramhall recently played a series of concerts in Bahrain 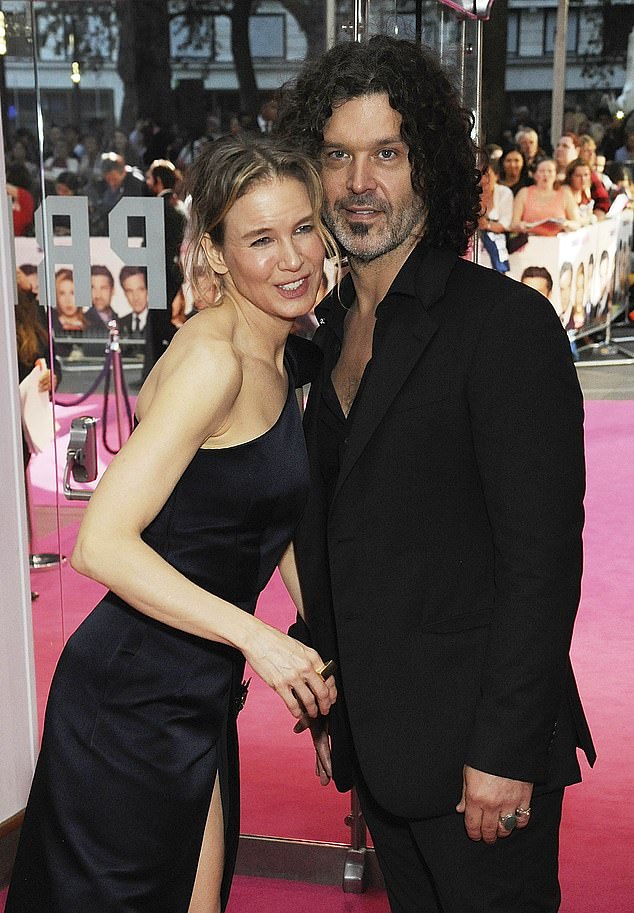 In court documents lodged back in 2014 – at the height of Bramhall’s relationship with Zellweger,  Melvoin’s lawyer stated the couple were $300,000 in debt – and that Melvoin was desperate for financial aid.

Her lawyer said Melvoin and her daughters had been forced to ‘endure’ media coverage of Bramhall and Zellweger, including pictures of them ‘frolicking’ in the Hawaiian ocean.

With Bramhall happily ensconced in Zellweger’s mansion, Melvoin claimed she was struggling for money to allow her to care for their young daughters, India, (then 12), and Elle, (then nine). 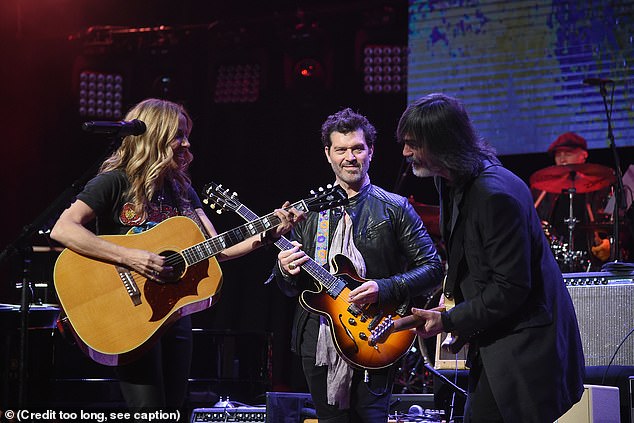 Bramhall (centre) performing with Sheryl Crow in 2010. The pair began dating and Bramhall reportedly left his wife Susannah as a result 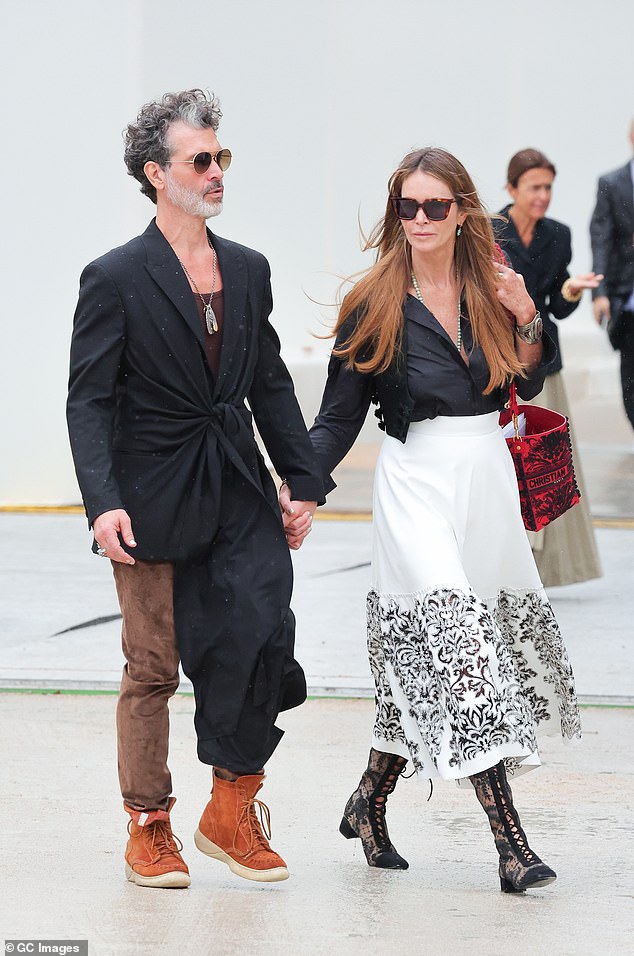 Indeed, the papers continued: ‘Respondent’s ATM card was rejected at the grocery store for insufficient funds, she receives multiple delinquent notices for the family’s debts and the telephone and cable television at the family residence have recently been turned off.

‘All the while, Respondent and the girls have had to endure the widespread media coverage Petitioner and his family girlfriends have received, including recent photographs of Petitioner and Ms Zellweger frolicking in the ocean in Hawaii.’

Continuing on, Melvoin’s lawyer claimed that Bramhall has ‘consistently rejected’ all efforts to put support orders in place and deal with their ‘mounting debts’ – despite the fact the singer’s financial future is ‘completely precarious’.

The pair reportedly reached a settlement.

Bramhall and Melvoin married in April 1997 but split in April 2010 after he struck up a romance with millionaire singer Crow.

Bramhall then began dating Zellweger in 2013.

It’s not known how long the rocker has been dating Australia’s most famous supermodel however the first hint of their romance began when they arrived arm-in-arm at several Paris Fashion Week shows in September. 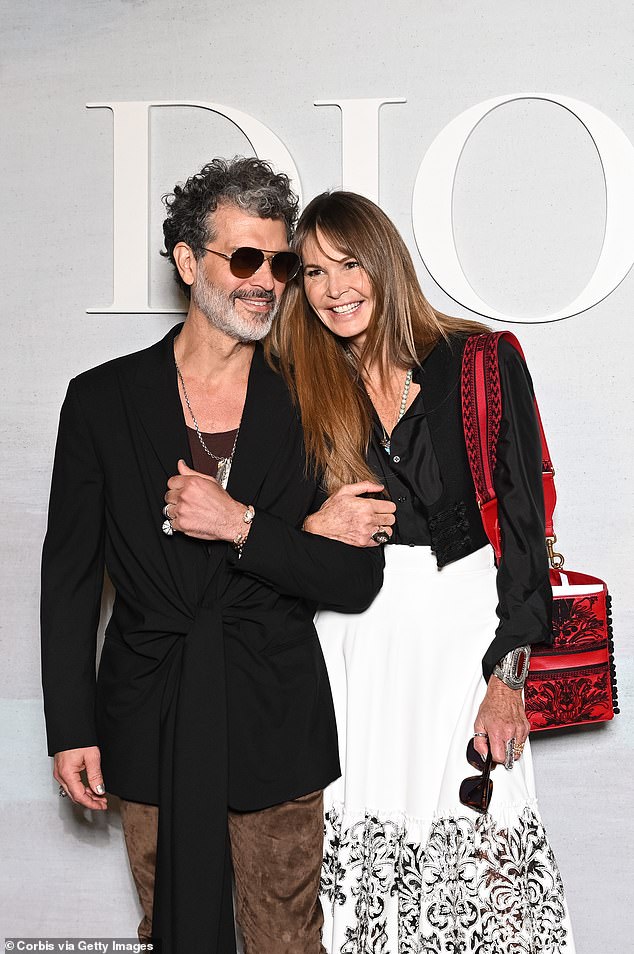 Elle, 58, is several years older than Doyle, 53, who has two children from a previous marriage 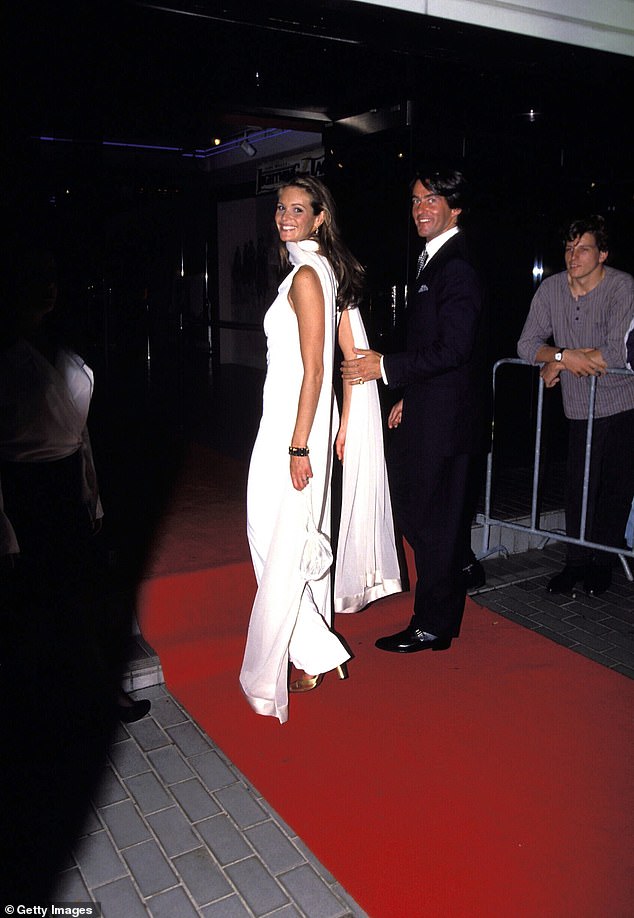 Going full ‘Instagram official’ this week, the couple posted a series of images declaring their love.

‘Love is a spiritual phenomenon; lust is physical. Ego is psychological; love is spiritual,’ Bramhall wrote on his Instagram account with an accompanying image of him with Macpherson.

‘Love the person but from the very beginning make it clear that you are not selling your freedom.’

Macpherson responded on her own account: ‘In mysticism that love of truth which we saw as the beginning of all philosophy leaves the merely intellectual sphere, and takes on the assured aspect of a personal passion.

‘Where the philosopher guesses and argues, the mystic lives and looks; and speaks, consequently, the disconcerting language of first-hand experience, not the neat dialectic of the schools. 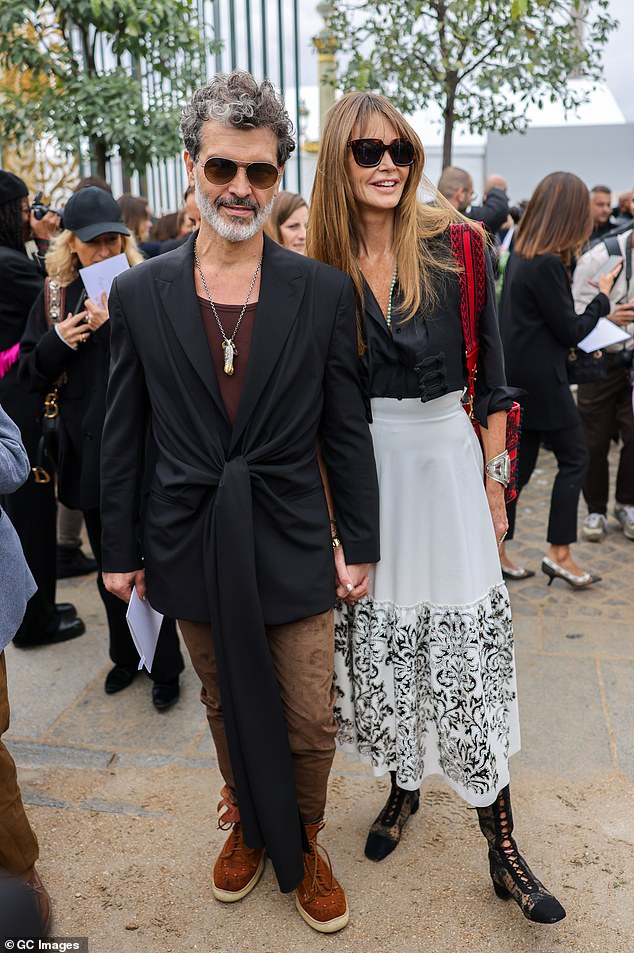 ‘Love is a spiritual phenomenon; lust is physical. Ego is psychological; love is spiritual,’ Bramhall wrote on his Instagram account

Macpherson’s most-recent known relationship was with controversial British anti-vaxxer Andrew Wakefield who she split with in 2019.

Before that the model and wellness entrepreneur was wed to US billionaire Jeff Soffer for four years.

The Aussie beauty amassed a colourful dating history during her pin-up heyday and was linked to a number of mega-famous men during the 1990s and 2000s including Kevin Costner, Axl Rose,  Sean Penn, Billy Joel and the late comic Norm McDonald.

Macpherson was also married to French fashion photographer Gilles Bensimon from 1986 to 1989.