AceShowbiz –
Emily Ratajkowski is never one to shy away from flaunting her enviable bod. However, her look while frolicking on the Beach in Sydney, Australia on Monday, November 12 was probably the most daring look the 27-year-old model/actress had ever done.

For the sunny outing, Emily opted for a two-piece skimpy bikini that barely covered her body. The bikini top was so tiny that it only covered her nipples while putting her sideboobs on full display. The stunner’s racy ensemble also featured a whole lot of strings that embraced her Insta-famous physics and a pair of minuscule G-string briefs that displayed her derriere.


She might not want to cover her body under the scorching sun, but the “Blurred Lines” babe apparently still made sure her eyes were fully protected behind a pair of stylish dark sunglasses.

Accompanied by a female pal, the “Gone Girl” star could be seen enjoying Australia’s sunny weather on the Bondi Beach while playing in the water. At one point, she was seen at a kiosk by the beach as she waited for her beverage. Considering the tiny ensemble she sported, it was almost unsurprising that she suffered a nip slip. The brunette beauty didn’t seem to notice the wardrobe malfunction as she didn’t make an effort to fix her bikini top. 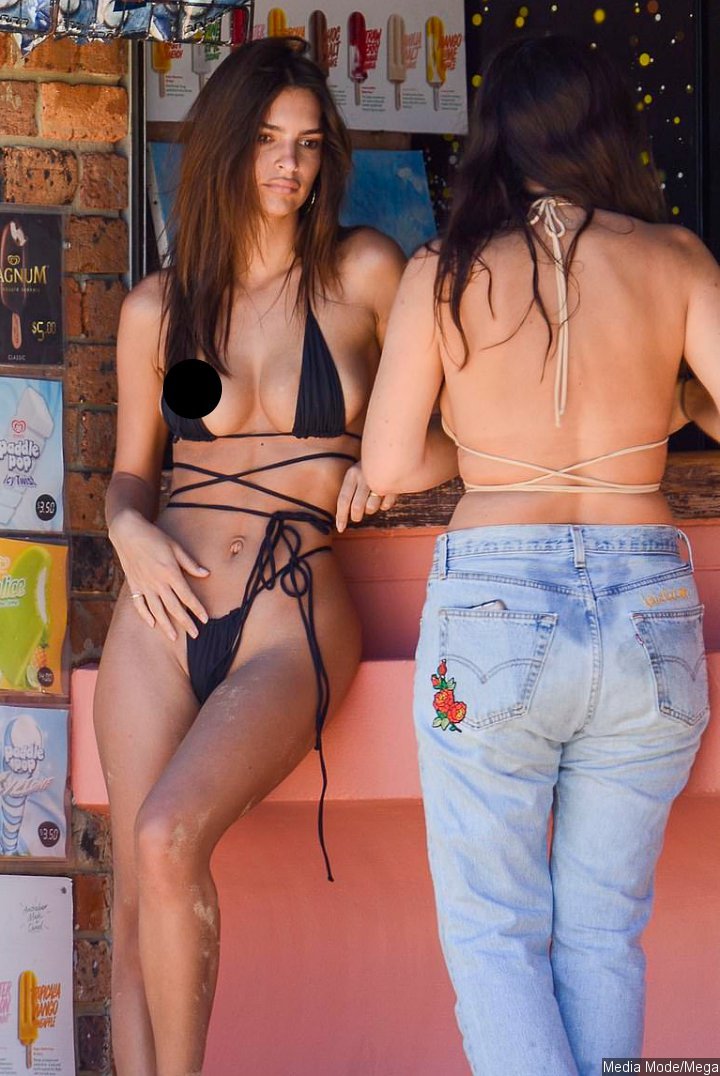 Emily flew to Australia to host GQ Australia’s Men Of The Year Awards on Wednesday night, November 14. Her Australian getaway arrived after her Las Vegas trip over the weekend to attend the REVOLVE Awards. Emily was honored with the coveted Woman of the Year award at the award-giving ceremony.

The victory came after she broke the internet earlier this year when she announced that she married Sebastian Bear-McClard in a courthouse wedding in February. They got married after dating only just a few weeks.

“He proposed to me at Minetta Tavern [an upscale restaurant in New York City], and he didn’t have a ring so I was like, ‘mmm, nah,’ ” Emilly revealed during an appearance on “The Tonight Show Starring Jimmy Fallon“. “And then he took the paper clip that the bill was paid with and made me a ring which I actually thought was really romantic.”