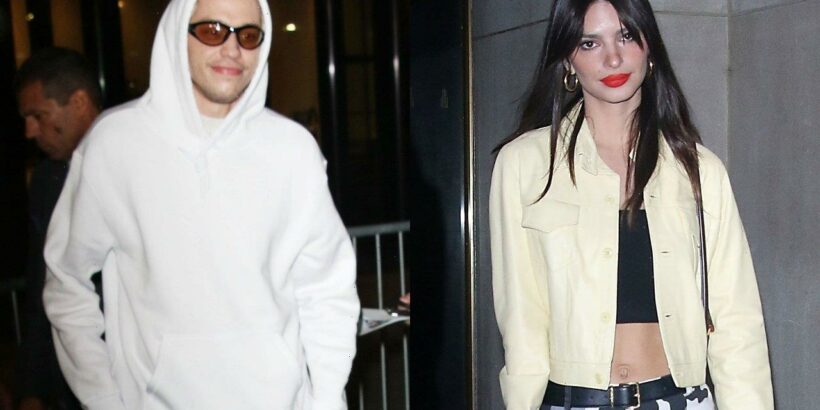 The ‘Gone Girl’ actress and the comedian, who reportedly ‘have been talking for a couple months now’, fuel their dating rumors after they’re spotted sharing a hug during an outing.

AceShowbiz –Emily Ratajkowski wants to have more than one partner. The “Gone Girl” actress, who has been romantically linked to Pete Davidson amid her divorce from Sebastian Bear-McClard, hinted that she wants to date “multiple” men and women.

Making use of TikTok on Thursday, November 17, the 31-year-old beauty shared a video of herself mouthing the words to audio that said, “I would be with multiple men, also some women as well.” She added, “Um, everyone’s hot but in an interesting way.”

Many have since reacted to the clip, with one fan writing, “I mean…ur well on ur way! Brad Pitt, some nyc dj, Pete Davidson, in a span of a couple of months lol and that’s just what we know.” Another commented, “sis trying to say Pete ain’t the only one.”

According to a recent by Us Weekly, Emily and Pete “have been talking for a couple months now.” A source claimed that the model and the comedian “are in the very early stages, but both really like each other… Pete makes Emily laugh and he loves how intelligent she is.”

Prior to that, gossip account @deuxmoi shared a screenshot of someone’s DM on Instagram that read, “CAN’T BELIEVE I’M SAYING THIS, ANON PLS.” It added, “EMRATA AND PETE DAVIDSON ON A DATE IN BROOKLYN TOGETHER. HOLDING HANDS AND ALLLLLLLLL. [Redacted] his hands were allll over her, ad they’re clearly hooking up.”

Emily has yet to explicitly confirm the dating speculations. However, the model reacted to the rumors by liking a viral tweet from Dionne Warwick which saw the musical icon joking about being Pete’s newest love interest.

On Wednesday, Emily and Pete were photographed sharing a hug while meeting to celebrate his 29th birthday in New York City. For the outing, they opted to go with matching black puffer jackets, white T-shirts and gray sweatpants.