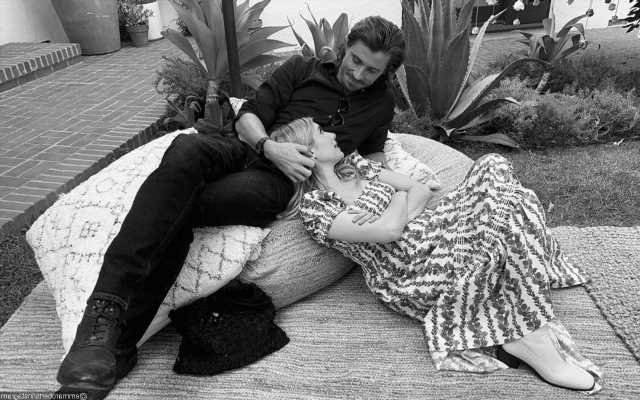 The ‘American Horror Story’ star is seen coming to the Bel-Air nuptials of the socialite with Britney Spears’ longtime manager Cade Hudson instead of her baby daddy.

AceShowbiz -Where’s Garrett Hedlund? Emma Roberts has just possibly sparked chatters about her relationship status following her appearance at Paris Hilton and Carter Reum‘s wedding. The actress raised eyebrows as she was spotted coming to the star-studded event with Cade Hudson, instead of her baby daddy, on her arm.

In pictures that have circulated on the Internet, the “Scream Queens” star was seen holding hands with Britney Spears‘ longtime manager as she arrived at the Bel-Air mansion. “Triple Frontier” star Garrett was nowhere to be seen around her.

For the occasion, Emma opted for an all-black ensemble that consisted of a long dress with a black blazer clung onto her shoulders. She carried a small black purse and wore black pointed toe pumps while her long blonde hair was parted in the middle and slipped into the back of her ears. She sported natural makeup with nude lipstick while accessorizing with a thin silver necklace and small silver earrings.

Cade, for his part, looked dapper in a classic black tuxedo on top of a white shirt with a black bow tie, and black oxford loafers. He topped his look off with small round sunglasses.

Emma and Garrett started dating in early 2019, shortly after she called off her engagement to Evan Peters, whom she dated on and off since 2012. In August 2020, the daughter of actor Eric Roberts announced that she and the “Tron: Legacy” star were expecting their first child. Their son was born on December 27.

While it’s not clear if the first-time parents have broken up or not, there has been speculation about their split as they unfollowed each other on Instagram, according to Daily Mail. Moreover, the pair were last photographed together back in April at a Oscars Party celebrating Andra Day and the cast of “The United States Vs. Billie Holiday“.