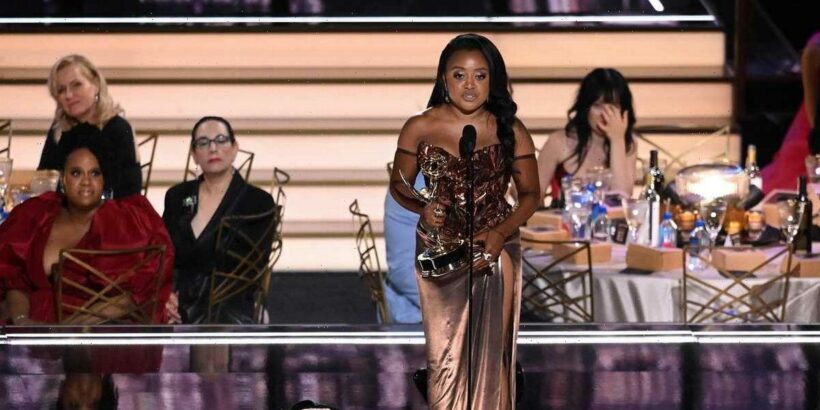 Viewers of the 2022 Emmys were not happy with Jimmy Kimmel after he stole the limelight from actress Quinta Brunson as she accepted her accolade.

The 54-year-old chat show host pretended to pass out onstage as Quinta, writer and star of hit comedy show Abbott Elementary, gave her acceptance speech for Best Writing for a Comedy Series.

This was the actress’ first ever Emmy win and so it was a big moment for her – that annoyed fans pointed out was upstaged by Jimmy, who remained ‘passed out’ on the floor beside her the whole speech.

Being a good sport, Quinta told the audience: “Thirteenth time in a row that he’s lost and he just got into the skinny margaritas back there.”

She then attempted to push Jimmy out of the way, saying “Jimmy, wake up, I won”, but the US host only gave a thumbs-up and continued to lie down.

When Quinta was done with her acceptance speech, actor Will Arnett, who had joined Jimmy onstage to host the award, then finally dragged the presenter offstage as Quinta graciously thanked the chat show host at the end.

Fans shared their unhappy reactions to Jimmy’s bit, as one person tweeted: “Jimmy Kimmel not moving to get out of Quinta Brunson’s way is a (s***ty, selfish, bulls***) choice.”

A second viewer wrote on Twitter: “Can’t lie, I’m still annoyed that Jimmy Kimmel’s annoying a** was on the ground trying to take attention away from Quinta Brunson’s historic victory.”

“Jimmy Kimmel should have left the stage during Quinta’s speech. Highly disrespectful”, another commented.

A fourth said: “Kimmel playing dead on the ground right next to a black woman accepting her rightful place in the future of tv is such a stinging metaphor.”

While many viewers weren’t pleased with the award show moment, winner Quinta, 32, said it “didn’t bother me that much” later backstage, as she spoke of how Jimmy featured her on her first major primetime TV appearance and was a huge fan of her show.

“I think in that moment, I was just really happy that it was Jimmy up there,” the actress told reporters.

“I kind of consider him one of the comedy godfathers; I’m a huge fan of Will Arnett, so I was wrapped up in the moment. I don’t know — tomorrow maybe I’ll be mad at him.

"I’m gonna be on his show on Wednesday, so I might punch him in the face. I don’t know. We’ll see what happens.”