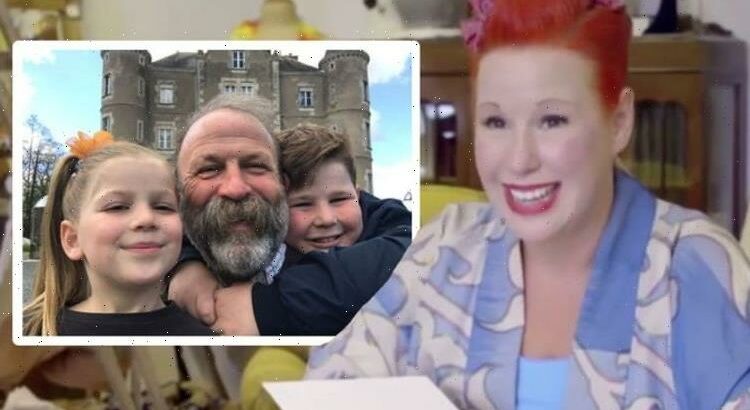 Angel Strawbridge says dollhouse is ‘out’ her ‘comfort zone’

Escape To The Chateau’s Angel Strawbridge, 43, has been married to her husband and Channel 4 co-star Dick, 62, for six years, and the two share two children together, Arthur, eight, and seven-year-old Dorothy. But he is also father to two older children, James, 37 and Charlotte, 35, and while Angel revealed it took everyone a little while to get used to the new family dynamic after she was introduced onto the scene, she gushed over their closeness, especially when her step-grandchildren are of a similar age to her two youngsters.

They are all fabulous!

In a recent interview on Netmums’ Sweat, Snot & Tears podcast, the creative whizz beamed as she spoke about her grandchildren.

“They are all fabulous!” she exclaimed.

“I’m often the one that gets all their pressies sent to them because their kids are a similar age to our kids.

“One Christmas we had a one, two, three, four and a five-year-old here – it was hectic!”

She then moved on to speak about her relationship with James and Charlotte, who Dick shares with his ex-wife.

Angel said: “I love them to bits!

“This is probably textbook, but when there’s somebody new on the scene – and Dick had been separated for many, many years before he met me – but it always feels weird when there’s someone new introduced into the children’s lives, and it doesn’t matter if they’re young or old – older, as they were.

“I still think it is difficult and it took time,” she explained.

“They were really happy for Dick, and then it just took a while for us all to settle in with our different dynamics.”

Angel went on to state that she sees herself as a good friend to both James and Charlotte, and that she will always be there for them no matter what.

“I consider myself to be their friend, and if they were ever in trouble they could ask me as well as asking Dick,” she smiled.

“They could ask me anything at any time.”

She revealed that Charlotte often texts her asking for sewing tips, as Angel has quite the following from her creative flares that are seen on the Channel 4 series.

James opts for more entrepreneurial questions, as she considers herself something of that nature, too.

But she was taken aback at the thought of being called a step-mum, because she’s never been referred to as that before.

Despite being married to Dick for the past six years and officially being their step-mum, she confessed they have never used that title on her.

“No one has ever officially called me that!” Angel laughed.

“It’s weird, this is sort of odd isn’t it, but obviously they are in my age range.

“Me and James we get on really, really well.