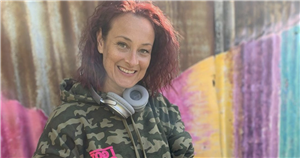 Ex-Eastenders star Luisa Bradshaw-White has moved on from her role as an actress to pursue hosting dance classes.

The 46-year-old confirmed that she’d be taking on this new gig on her Instagram earlier this month, posting a photo on of herself in full DJ-mode, wearing a camouflage print hoodie and a pair of silver headphones while standing beside a laptop and decks.

“Hey guys! So excited for my latest venture!” Luisa captioned the photo.

“I have joined forces with @love.life.uk to create the most awesome Ecstatic Dance parties. I will be DJing the best music EVER to dance to. Can’t wait to see you all there!

“Come join us we are at @omloveuk".

The actress made her last appearance on Eastenders playing Tina Carter at the end of last year. Luisa now presents Ecstatic dance classes, offering an alternative way to enjoy the thrills of going without actually having to.

The classes provide dance and aerobic exercises that are practised alongside rhythmic beats, akin to music you’d hear booming in clubs around the UK.

Luisa became enthusiastic about these workouts after participating in them herself a few years ago.

A promotional poster uploaded to her Instagram Stories as well as her new business’ official Instagram page, highlights details of the upcoming first class which will be held on 31 October in Chorleywood, Hertfordshire.

Luisa recently explained the benefits of Ecstatic dance classes and what her role will be to HertsLive: "Everybody drinks the cacao [tree that produces cocoa beans] so there's a little bit of a ceremony and then people just start dancing and I DJ the music to start really, really chilled and then the beat picks up and the cacao really opens your heart.

"The cacao and the music together are such an awesome combination."

This different venture comes after the multi-skilled actress recently discussed how she “came out as gay” accidentally.

Married to wife Annette Yeo since 2015, with whom she shares two daughters, Luisa never considered being gay in her earlier years until she confronted her sexuality during a conversation with friends when she was 19-years-old.

"The realisation came when I was talking with some new friends," she said to Metro.co.uk.

"They both said they liked women and without thinking, I replied, ‘Ooh yes, me too!’. I sort of gasped as it was the first time I had even considered that I might not be straight.

"It’s crazy that a fleeting conversation could have had such an impact on my life and I got the best introduction to being a gay person you could ask for.

"I had huge amounts of fun. While I was out to have a good time, I knew almost instantly after coming out that all I wanted was to find my true love, settle down and have a family."