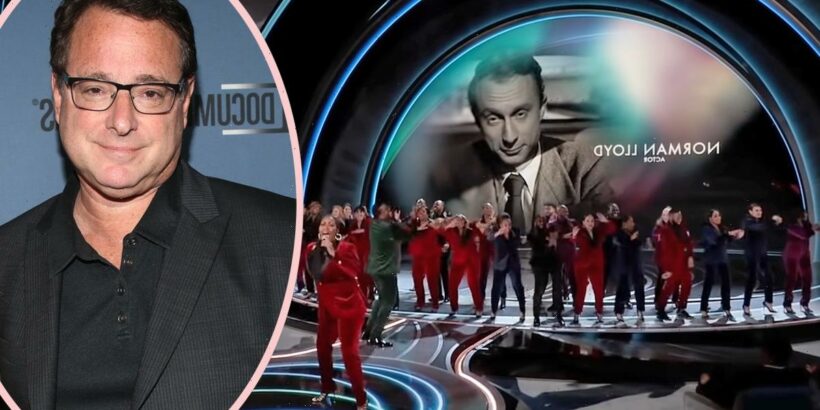 Everyone is still divided on the biggest Oscars moment of the night, the “slap heard round the world”… but when it comes to the In Memoriam everyone is on the same page, asking: WHERE WAS BOB SAGET?!

The Full House star’s tragic death sent shockwaves around the world as fans and co-stars mourned together. It was such an outpouring of grief that proved just how beloved Bob truly was.

So… how is it the freakin’ Oscars didn’t include him in their ceremony?

We mean, he was mainly known for his standup and TV work, but he directed and acted in several movies. And they just left him off? Fans were understandably upset; here’s just a few of the many comments we saw:

“Where the F was Bob Saget in the memoriam?!?!”

“How did they forget Bob Saget?”

“The omission of Bob Saget from the In Memoriam was just ridiculous.”

“wait, they forgot bob saget in the in memoriam! seriously we need better people in charge of the ceremony!”

“Cancel the #oscars for not mentioning Bob Saget in the Memoriam”

Others pointed out the other folks left out: sitcom legend Ed Asner and Bob’s Dirty Work star Norm MacDonald!

“The #Oscars in memorian left out Norm McDonald, Bob Saget and Ed Asner. Pretty messed up”

“Did @TheAcademy really just leave Bob Saget and Norm MacDonald out of the In Memoriam? WHAT THE F**K?!”

“The Oscars “In Memoriam” somehow didn’t include Bob Saget or Norm Macdonald.

How many comedians have to get hit in one day?”

BTW, the In Memoriam segment also left out Meat Loaf — who again, was primarily known as a singer but acted quite a lot, including in iconic roles in both The Rocky Horror Picture Show and Fight Club — and Robert Downey Sr., RDJ’s filmmaker father who directed the cult classic Putney Swope.

Seriously, how do they keep doing this, y’all?? Does the show really not have the 30 extra seconds to get the people they leave off every year??

Why do YOU think the Oscars keep leaving people out of the In Memoriam every single year?