When R&B singer-songwriter H.E.R. performed at the 2019 Grammy Awards with a breathtaking, custom-made, clear acrylic guitar from Fender, audience members were at a loss for words. So was Moya Nkruma, who was there to watch Fender’s custom creation in action. As Fender’s artist marketing manager, Moya Nkruma helps create custom guitars for artists, and the sparkly Stratocaster was the result of her own work.

Nkruma is Fender’s artist marketing manager for the Urban and Gospel Department, handling all the publicity around the artists and their Fender instruments. Managing their requests can mean anything from support for tours, booking artists for campaigns, assisting with new product launches, or helping a musician demo a Fender product. If artists need marketing work with Fender, custom equipment, or some work with Fender’s ad campaigns, that’s all up to her. But one of the coolest parts of her gig is designing custom guitars for artists. "I love what I’m doing here at Fender," Nkruma says.

The artists that come to Nkruma for their fantasy guitar often have their own vision for what it will be, and it’s her job to make sure their fantasy comes to life. "Their guitar or their bass is a tool that they use like an external part of their personality," Nkruma explains.

While some artists come to Nkruma with a very specific idea of what they want, at other times, she and the artist collaborate together to create a new vision. "I will take that information — whether it’s down to like colors or technical aspects of the guitar, and the tone that they’re trying to get out of it — to our product team," she says. From there, depending on how complex the work is, there are different steps she and the team have to consider. Sometimes the work can be built solely by the product team, and other times the custom work needs to be done by the master builders based in the Fender Custom Shop in Corona, California. Changes requested can include anything from aesthetics of the guitar to tone or overall playability of the instrument, and the artist gets to test samples throughout the process. Nkruma’s job is to make sure the client is informed and satisfied with the perfect guitar of their dreams. 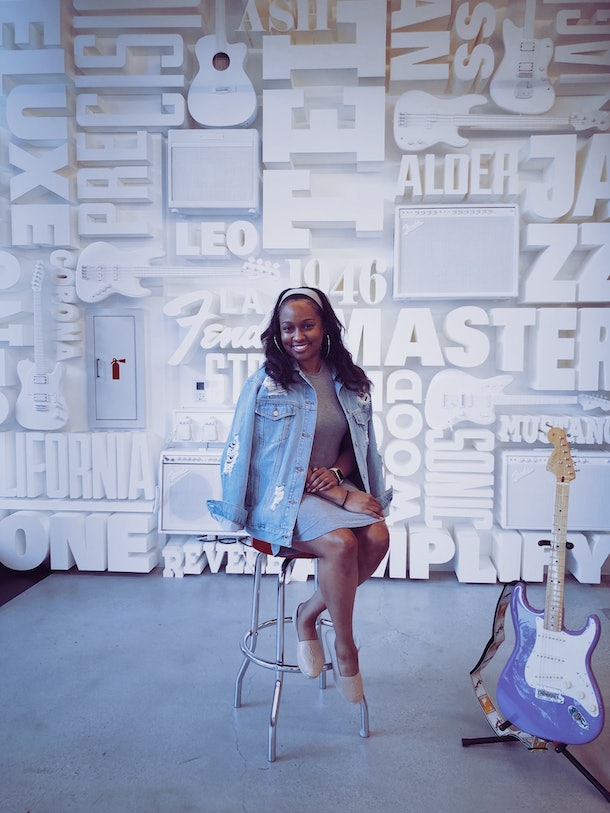 Nkruma, who has been with Fender since October 2018, got the ambitious request for her first custom guitar about two months into the job. "I got a text from H.E.R.’s management. And they sent me a screenshot of a completely clear guitar and the text said, ‘Can we make this for H.E.R. for her Grammy performance?’ And I said — not knowing how really the process worked at that time — ‘Let me check.’" At first, she got shot down: H.E.R. needed the guitar in just one week. The process to create a custom Fender guitar for artists is typically six months.

Instead of accepting defeat, Nkruma convinced her boss to OK the project. "I said, ‘You know, she’s nominated for two Grammys, she’s probably at least going to take home one, and she is performing, and this is her first Grammy debut. We have to figure it out." Eventually, she got the go-ahead. The guitar was finished in just five days.

Because of the rushed process and delicate material (apparently, acrylic is very hard to work with), Nkruma had to be available 24/7 until the guitar went out. "I made myself available to take calls or texts from H.E.R.’s management team or my colleagues at Fender who were working on the project, regardless of the time of day or night," she recalls. She was the main link between H.E.R and Master Builder Scott Buehl, who at one point worked for 48 hours straight to get it done perfectly. "In all seriousness, to accomplish a huge feat like this takes a team," Nkruma says.

After such a feat, Nkruma felt she needed attend the Grammys to see the finished masterpiece in person. "When she came out, I literally started crying," Nkruma recalls. The guitar "looked like crystal when the light hit."

Knowing she had a hand in the creation of such an inspiring moment made it all the more special for Nkruma. "It was just amazing to see that something that you had worked on [with] this artist having such an amazing and important iconic moment," she says. "And [knowing] that you played some small role in contributing to that."

"This is why I’m here," she remembers thinking. "These are the projects that you need to work on." 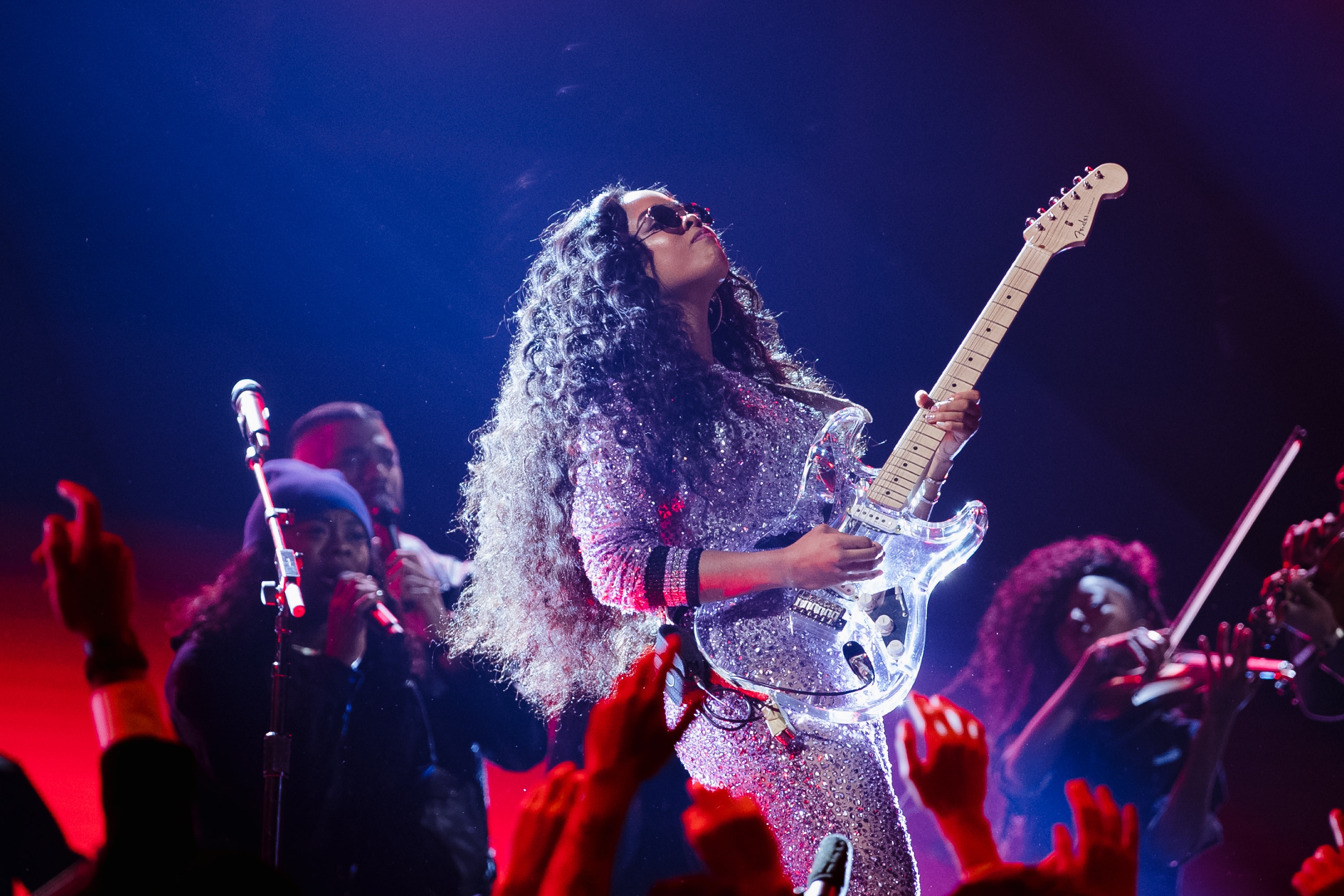 Nkruma’s love affair with music began at age 8 with the violin. Later, she would become a trained opera singer. "Once a musician, always a musician," she laughs. "I’ve always known what I wanted to do. At a very, very young age I knew I wanted to be a musician."

In college, Nkruma went to a music conservatory and participated in vocal competitions. But she felt that "there should be more than just standing in the crook of the piano and performing." She also wanted to create things, calling herself a kid "that wrote plays and directed them and made films." With that creativity, she realized she wanted more than just the performance aspects of the music industry. Watching her mom — a modern dancer and choreographer — also work with the business aspects of music inspired her to follow the same path. "I saw a woman in my own house kind of wear both hats," she recalls. "So I thought, OK. I can do both. I don’t have to choose."

Although Nkruma loved the conservatory and the classical repertoire, she felt there was more she wanted to do. "I thought, you know, there’s more to this than just performing, so I wanted to create opportunities for people like me, and for myself as well." From 2001 to 2018, she worked at the American Society of Composers, Authors, and Publishers (ASCAP), where she was promoted to the Director of the Urban Department in 2017. She says the working relationships it fostered helped prepare her for Fender. "I built an amazing network of songwriters, artists, music producers, label executives, publicists, and attorneys," she says. 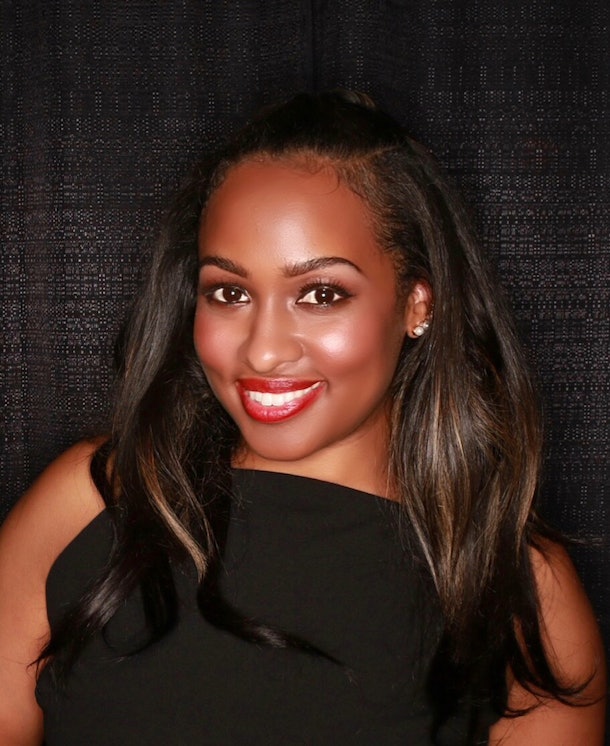 But at the end of the eight years, Nkruma was ready for something new. She saw the Urban and Gospel Department at Fender, which was brand new, as her opportunity to build something from scratch. "I wanted to be uncomfortable, and that’s probably one of the best ways to learn to make sure that you grow," she says. She took over the role of connecting directly with the artists and building those relationships, which she says is worth "your weight in gold." She says things like building a personalized instrument can foster amazing connections with artists. "They really feel like they’re part of the family, so I always say it’s a people skill."

When she’s got time to look for new artists, Nkruma does her own research by discovering musicians through music streaming platforms or "word of mouth" from others within the business. Sometimes, though, it’s just networking within her sphere and working duties. For example, over the summer, she bridged a connection between Fender and guitarist Ari O’Neal, who played guitar for Beyoncé’s Coachella show marching band. Fender ended up doing a promotional video with O’Neal, showcasing the American Acoustasonic Telecaster back in August 2019.

As a musician herself, Nkruma knows how important it is to make sure the industry is as fair to its artists as possible. Nkruma recently joined the Los Angeles chapter board for the Recording Academy to advocate for fair treatment and compensation for songwriters, producers, musicians, and artists. "I think sometimes that information [about the music industry and compensation] can be a little dubious or it can be a little vague," she says. "And if there’s any way that I can help pass that information along … that’s something that I actively work on."

To anyone who is interested in pursuing a career in the music industry’s business side, Nkruma suggests getting an internship and thinking about how to keep learning. "Constantly be a student," she says. "Pick peoples brains, but then be aware of their time." Perhaps most importantly, know your worth and "offer what you could bring" to the table. For Nkruma, the individualism of each artist and her work at Fender is what keeps her excited to play her own role — pun intended — in keeping music alive.