Mercedes-Benz Fashion Week Australia kicks off on Sunday, however with last minute changes to the schedule, designers pulling out and a distinct lack of big names, the fashion pack is lamenting what was once one of this town's great social occasions. 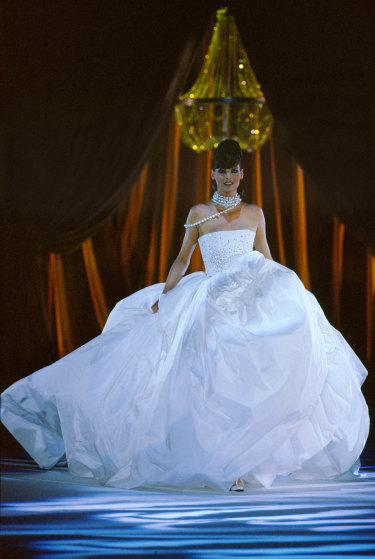 Linda Evangelista walks in the Alex Perry show at Australian Fashion Week in 1997.

Now in its 24th year, sadly it's the list of who is not showing at this year's festival of the frock which has summed up the general antipathy towards the ragtrade's annual extravaganza.

Noticeable absences include Luke Sales and Anna Plunkett's Romance Was Born, Kaftan queen Camilla Franks, master of the evening gown Alex Perry, Akira Isogawa, Bianca Spender, the Zimmermann sisters, Dion Lee, Toni Maticevski, Kym Ellery and Camilla & Marc and Ginger & Smart, all designers and labels that had been regular features at the event over the years. 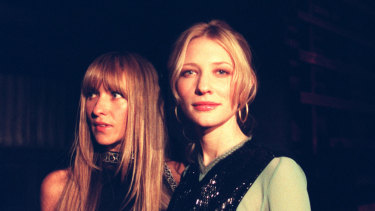 Add to that the demise of former Australian fashion powerhouses who were renowned for putting on big budget, big-name shows over the years like Collette Dinnigan, Wayne Cooper, Alannah Hill, Jayson Brunsdon, Sass & Bide, Ksubi, Morrissey Edmiston, Charlie Brown and Lisa Ho, and this year's offering is looking pretty insipid. 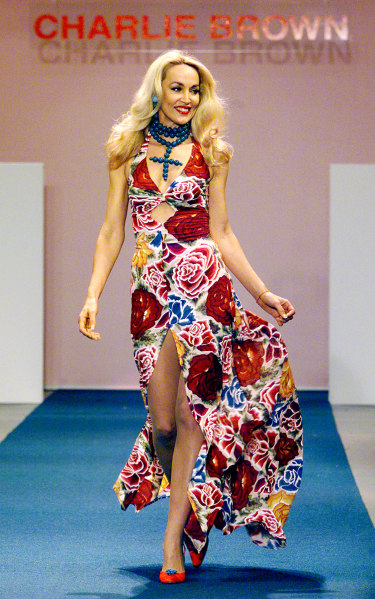 "It's the expense, and we're talking tens of thousands of dollars for a big show, that's killing it. Unless you have someone like Mercedes-Benz sponsoring you, it is virtually impossible to get the money together for an Australian designer," one of the event's former participants complained to PS, on the grounds of anonymity.

"The owners, IMG, need to really re-think how they do things, otherwise I can't see how Australian Fashion Week can survive."

Fashion Week has certainly served up some memorable moments, from the time in 2001 when the late Kerry Packer and his son James, along with the extended Packer family, sat in the front row at his then daughter-in-law' Jodhi Meares' bikini show.

Then Australia's wealthiest family, the Packers found themselves donning plastic raincoats and being splashed with water as models paraded about in skimpy swimwear, including a diamond-encrusted number worn by Kristy Hinze, accessorised with a giant python draped around her shoulders.  Years later Hinze would go on to marry her own billionaire, US moneybags Jim Clark. 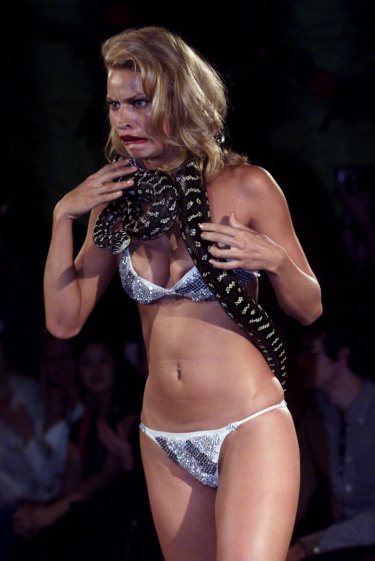 Charlie Brown flew a bevy of beauties to Sydney for Fashion Week including Sophie Dahl and the legendary Jerry Hall (now Mrs Rupert Murdoch), sending the veteran supermodel down the runway with a bewildered looking chihuahua popping out of her handbag.

Before the supermodel formerly known as Sarah O'Hare married Lachlan Murdoch, she was making all sorts of political statements at fashion week, some of which her in-law's right-wing media outlets would have found somewhat controversial. In 1999 she wore a design by Peter Morrissey which featured the Southern Cross and the Aboriginal flag.

And there was the full diva disaster in 1997 when supermodel Linda Evangelista had a "category eight" meltdown after the zipper of her Alex Perry gown broke minutes before she was due to hit the catwalk. It was Perry who had to frantically sew her back up before sending her down the catwalk.

There's been rampaging rats leaping over magazine editors, boozy after parties, countless models hobbled in ridiculous heels and others sent down planks only to find themselves in Sydney Harbour in the middle of the night, bruised egos over seat pecking orders and myriad other moments that have made Australian Fashion Week a hot bed of intrigue. 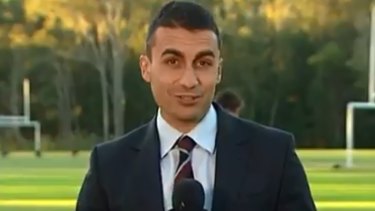 Massoud, who claims his professional reputation in the media world has been destroyed following a sustained campaign to discredit him, is suing over broadcasts by star shock jock Ray Hadley, who PS has previously revealed is currently the subject of at least three new bullying claims at the talk-back station. 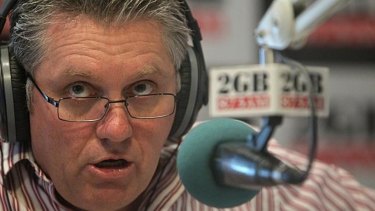 In March the Herald revealed lawyers acting for Massoud had sent defamation notices to 2GB as well as KIIS 106.5FM, The Daily Telegraph, the Nine Network (the owner of this masthead), B&T Magazine, Fox Sports and The Sporting News.

At the time Massoud said: "The stories written about me contained a complete and utter fabrication that completely misrepresented what took place and severely damaged my reputation.

“This fabrication has been repeated on numerous occasions by numerous media organisations, deepening the damage to my professional and personal reputation.”

On April 30 two separate Statements of Claim were filed with the NSW District Court, one naming Harbour Radio – a subsidiary of Macquarie Media, as the defendant, and the other  Massoud's former employer, The Daily Telegraph's publisher Nationwide News. Macquarie Media is majority owned by Nine, the owner of this masthead.

Massoud alleges he has been defamed on numerous occasions, including via an online story headlined '''Karma's a bitch', Ray Hadley unleashes on 'grub' Josh Massoud", which featured Hadley's comments broadcast on his show about Massoud.

Massoud's claim alleges the broadcasts knowingly conveyed false imputations that Massoud, who resigned from Seven, had "threatened to slit a junior colleague’s throat".

Massoud is also suing The Daily Telegraph, for which Hadley writes a regular column, and The Sunday Telegraph over a series of articles about his departure from the Seven Network.

A defence from either Harbour Radio or Nationwide News is yet to be filed, while a preliminary directions hearing is expected to take place within a month.

No secret that Hush leads The Way

When Kellie Hush was editor-in-chief of glamour bible Harper's Bazaar Australia, sitting in the front row of exclusive fashion shows with the likes of Gwyneth Paltrow, Cate Blanchett, Nicole Kidman and Kylie Minogue and collaborating with the late Karl Lagerfeld were simply all part of the gig. 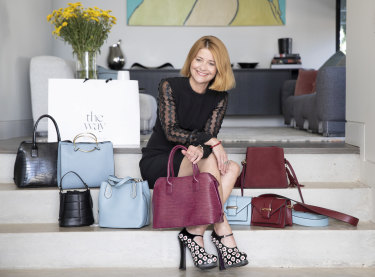 Former Harper’s Bazaar editor in chief Kellie Hush is going boldly where no other glamour magazine editor has gone before: the mall.Credit:Cole Bennetts

Indeed she was more Louis Vuitton than Lovisa.

But, nine months since Hush shocked the fashion world with news she was voluntarily walking away from Harper's, PS can exclusively reveal she is about to resurface in the fashion landscape in a very big and unlikely way.

In coming weeks Hush will launch her own brand of "accessibly-priced", fast-fashion accessories, with plans to open five stores by the end of the year in malls across Sydney, and more stores around the country in the months to follow.

And Hush has set her sights on taking a significant chunk of Lovisa's market share, as well as Zara, Top Shop, H&M and all the other fast-fashion retail juggernauts that have transformed the Australian apparel market over the past five years.

"Look, I love fashion and I love luxury, it's been such a privilege and an education to be immersed in that world, but to be honest I'm just a girl from Canberra who took the Murrays bus to Sydney seeking the bright lights," Hush told PS. 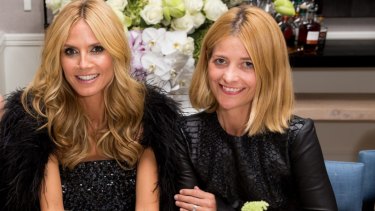 "I'm still very much that girl, but I know a lot more now about trends, imagery and the world of fashion. That's where my heart is, and where my focus is with this venture, to create a range of accessories, handbags and jewellery that is competitively priced and encapsulates all the knowledge I have gathered from my decades in the fashion world … filtering high fashion down to the street level.

"I'm sure a lot of my peers would be surprised that I would be jumping into fast fashion, but to me it's a world I know very well. It's where I came from."

Hush has secured the backing of a wealthy silent partner for the new venture, to be called The Way, and is in talks with one of Australia's major department stores to stock the brand.

Later this month The Way will launch its online store, with bricks and mortar outlets to follow in coming months.

"It is a huge exercise, negotiating leases and finding the right locations with high foot traffic. We are getting close. I have a small, dedicated team with me working on this, and I have invested a lot of my money into it … it is a very big deal for me, we have big ambitions."

Hush, who will also feature her own Kellie Collection in the range, says she plans to call in favours from some of the names she has worked with over the years. Top Australian fashion photographer Georges Antoni has already shot her first campaign.

"I also intend to call up a few favours from some of the girls I have worked with, the Jesinta Franklins and the Lara Worthingtons, girls I've supported and gotten to know really well over the years," Hush said. "They are the sort of women who my market watches closely on social media, they are the role models of a whole new generation."

The sisterhood was out in force on Thursday night for the annual InStyle Magazine Women Of Style Awards. 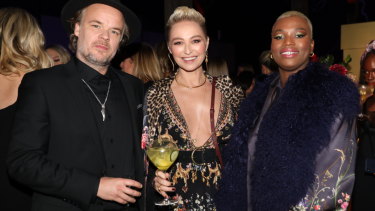 Camilla Franks was radiant as she made one of her first public appearances since undergoing treatment for breast cancer, declaring that she felt "fantastic" despite her health battles and her more recent legal battles involving her father Bill, who is trying to sell his 25 per cent stake in the kaftan empire.

Julie Bishop arrived with David Panton, sporting a new post politics pixie hair-do and looking like she was auditioning for Disney On Ice in her bold red Tonya Harding number. 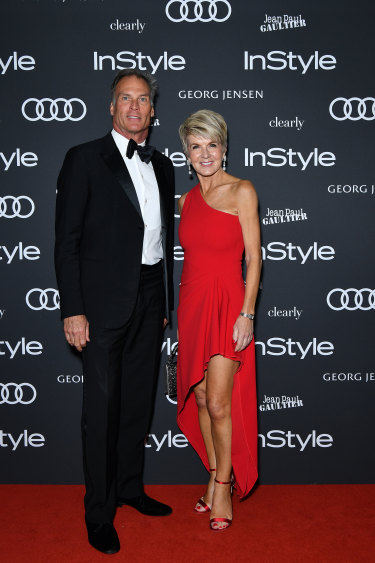 David Panton and Julie Bishop at the InStyle gala.Credit:AAP

Carla Zampatti held court and posed for selfies with Marta Dusseldorp, who despite being one of Australia's most acclaimed actors, admitted she still got anxious about where her next role was coming from. 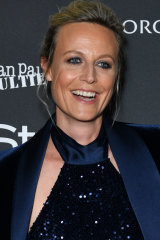 Marta Dusseldorp says she is always open to offers.Credit:AAP

"I think that is a common thing for most actors … let's say I'm always open to offers," she joked with PS, hinting that she did have a major project in the works which she was unable to talk about, yet.

Miranda Tapsell was on a high as her new film Top End Wedding became the second biggest box office earner in the country behind Hollywood blockbuster Avengers: Endgame.

Tapsell, who was the recipient of InStyle's ''Spirited Storyteller'' award, said she was proud of her movie project, which she produced, co-wrote and stars in. She also managed to squeeze her entire family into the production too, with various relatives getting work as extras.

And while ''The Voice of Now'' award winner Amy Shark performed for the audience, arguably the biggest star in the room appeared to be Instagram comic  and ''Modern Rebel'' winner Celeste Barber. 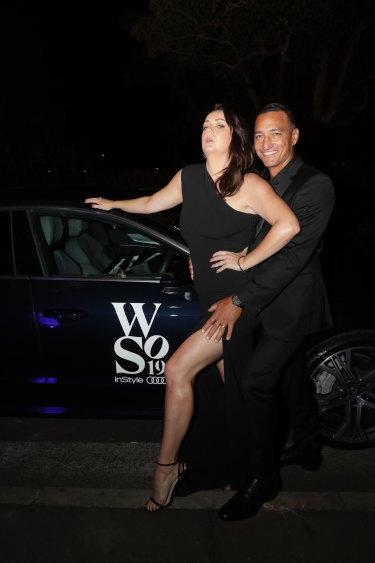 Big star: Celeste Barber hamming it up with Api Robin at the InStyle awards. Credit:Chloe Paul

When she took the stage the entire staff at Bar M in Rushcutters Bay, the venue for the night, had their smart phones out to capture the moment.