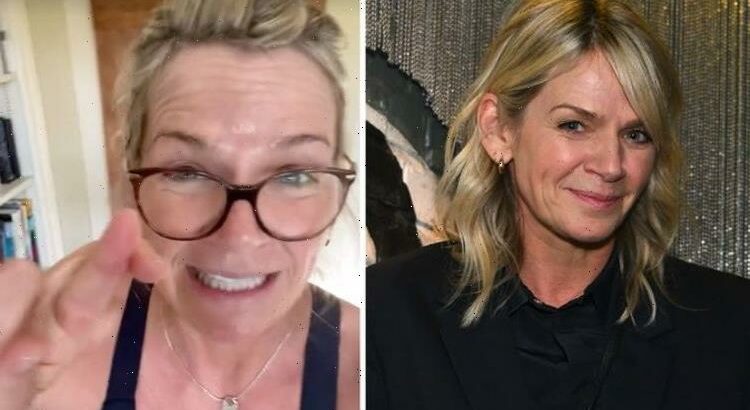 Zoe Ball utilised Instagram’s Story feature to wish her 629,000 followers a happy new year as she revealed she will return to The Zoe Ball Breakfast Show at 6.30 AM on Radio 2. The 51-year-old appeared to have been running up a sweat on her treadmill when she recorded the video.

Fingers crossed back to Radio 2 Breakfast Show tomorrow 6.30 if my PCR test is all clear

“Happy New Year,” she said while trying to catch her breath.

“Can’t see below the waistline — so tubby,” Zoe joked.

The mother-of-two continued saying she was keeping her fingers crossed of her return for tomorrow’s show since she had yet to take her PCR test.

“Fingers crossed back to Radio 2 Breakfast Show tomorrow 6.30 if my PCR test is all clear.”

The star has been absent from her show all week while Nicki Chapman stepped in to host.

It’s been quite the month for Zoe, who recently opened up about the death of her stepdad Rick, who passed away from a Motor Neurone Disease in December 2012.

She became emotional as she candidly spoke about her deceased family member, who all of her relatives were thinking about on the ninth anniversary of his passing.

During a chat with Gabby Logan about her BBC Sports Personality of the Year award, Zoe shed light on how former winner Doddie Weir helped raise over £1 million for Doddie Aid.

The money would be used to help find a cure for Motor Neurone Disease, which she stressed was a project that was extremely close to her heart.

“Hopefully one day we will find a cure,” the radio personality expressed.

She revealed during the interview that her stepdad died on that day nine years ago, much to Gabby’s surprise.

“We lost our stepdad Rick to Motor Neurone Disease on this day, quite a few years back now.”

“We think about him every day, so obviously this is something pretty close to my heart.”

That same month, Zoe celebrated her son Woody Cook’s 21st birthday as she once again took to her Instagram account to share a series of doting throwback photos to mark the celebrate the special occasion with her fans.

Some of the snaps in her gallery post included photos of Woody’s first school photograph, while another pic sees him cuddling up to his new girlfriend, Nell Williams.

Of course, there were also images of Zoe and her son throughout the years.