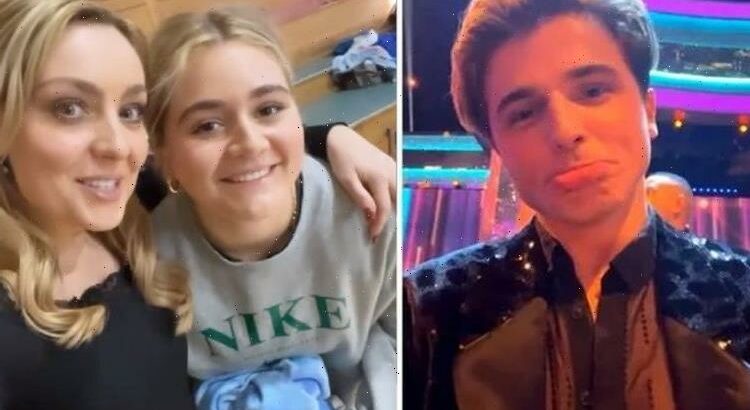 Tilly Ramsay appeared in Amy Dowden’s Instagram Story as the Strictly contestants embarked on yet another gruelling day of rehearsals today. The BBC contestant joked that she had found a new favourite – and it was not her former dance partner Nikita Kuzmin.

In a clip posted to Amy’s Instagram story, Tilly appeared to have worked up a sweat as she expressed having had “the most fun” working with the professional dancer.

“We have the most fun…,” the Strictly star gleefully said.

“We have the best time.”

The Strictly Come Dancing Live Tour starts on January 20 and will run for 33 dates until February 13.

The nationwide tour includes this year’s Strictly contestants including Bake Off star John Whaite, presenter AJ Odudu, and the BBC show winner EastEnders star Rose Ayling-Ellis, who will join Tilly on the road for the live shows.

Gordon Ramsay’s daughter will once again hit the stage with her dance partner Nikita, who helped the chef sail all the way through to Week 10 of the BBC competition.

After finding herself in her third dance-off against Rhys Stephenson during Movie Week, Tilly and Nikita were sent packing by show judges Craig Revel Horwood, Shirley Ballas, Cynthia Erivo and Anton Du Beke.

Ahead of her exit, The Matilda & The Ramsay Bunch author gave a heartfelt speech as her father Gordon broke down in tears.

“I’d just like to say a massive thank you to everyone who has made this an amazing, positive journey for me,” Tilly told Strictly presenter Tess Daly.

“From everyone here to backstage, wardrobe, makeup and camera crew. It’s just been the most extraordinary time.

She concluded: “So a massive thank you and, obviously, a huge thank you to Nikita who has guided me out of my shell and has just made this the most amazing experience.”

Last month, it was reported that Tilly had signed up to celebrity dating app Raya in the hopes of finding love, which further dispelled rumours of a romance between her and Nikita.

According to The Sun, Tilly had been using the app well before she signed up for the show.

She reportedly took a break from the dating platform to focus her full attention on the competition.

Throughout their time on Strictly, fans had taken to Twitter, pondering whether Tilly and Nikita were more than just dance partners based on their sizzling chemistry on TV.

The rumours were quashed as Nikita has been in a long-term relationship with his girlfriend Nicole Wirt since 2016.

“When Nikita’s girlfriend Nicole came to London, she immediately visited him and Tilly,” they said.

“They got on like a house on fire and bonded over Nikita. Nicole also gave them some tips on their dancing.”

The source added: “There is a huge amount of trust needed between a couple when one of you is spending hours in the arms of another woman.”

Express.co.uk had contacted Tilly Ramsay and Nikita Kuzmin’s representatives at the time.