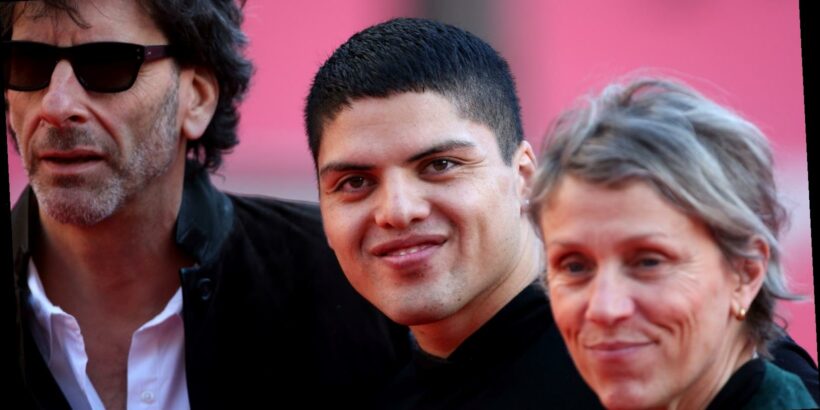 There are actors, and then there are actors. Frances McDormand falls into the latter category. The incomparable actress, known for her enigmatic roles in movies like Fargo, Wonder Boys, and the newly-released Nomadland, has won the Triple Crown of acting, having received two Primetime Emmy Awards, two Academy Awards, and a Tony. But now it seems that Frances McDormand’s son is following in his mom’s footsteps, and becoming part of the acting world as well.

McDormand and her husband, director Joel Coen, married in 1984. In 1995, they adopted their son, Pedro, from Paraguay (via Good Housekeeping). At the time, he was only six months old. McDormand, who was also adopted (her biological name is Cynthia Ann Smith), had been toying with the idea of penning a book on adoption, based on her experiences.

On being a mom, McDormand told the Belfast Telegraph:

“As a mother, you live on the edge of disaster. You just do. I didn’t give birth to my son, I met him at six months old, but from the minute I held him and smelled him, I knew it was my job to keep him alive.”

It seems Pedro McDormand Coen is getting into the acting biz, too

With powerhouse parents in the acting world, you might assume that their son would also take up acting as well. But you’d be mistaken. According to Good Housekeeping, Pedro has been working as a personal trainer. But a quick look at his IMDB profile shows that starting in 2018, Pedro has begun to slowly enter into acting. He is listed as an actor, having portrayed the character Brock in Myles Raven, and in 2019, he was a Lorea Guard in Triple Frontier.

Most recently, Pedro posted on his Instagram profile an image of his mom, Frances McDormand, posing on the January 2021 cover of Vogue. In the caption, Pedro writes:

“So incredibly thankful to everyone involved in this project of putting my MOM on the cover of @voguemagazine I’m speechless. I remember a couple months back she asked me what I thought she should wear and without hesitation I sent her all of my favorites from Jerry Lorenzo’s #SEVENTHCOLLECTION of the Fear of God look book. … Shot in an undisclosed location coming off the heals [sic] of our family film Nomadland I can’t wait to see what 2021 has in store for the McCoen Clan.”

Underneath the image where credits are listed, Pedro wrote: “Styled in-part by ME.”

With the beginnings of an acting and styling career, it would seem that Pedro McDormand Coen is on his way to becoming a triple threat, just like his mom.