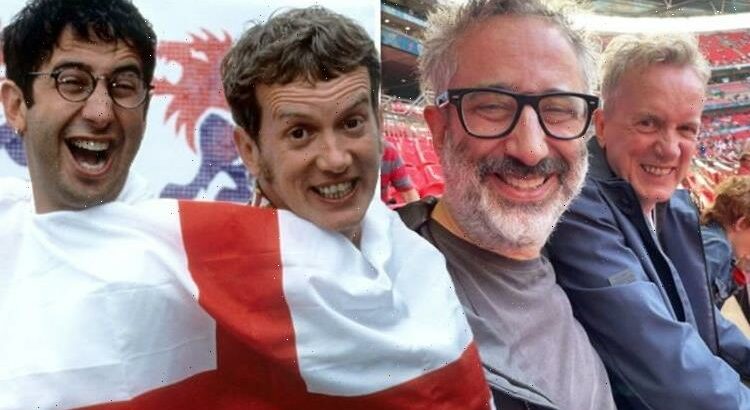 Comedians Frank Skinner, 64, and David Baddiel, 57, sparked a frenzy amongst England fans last night after they appeared at Wembley together to cheer the team on against Denmark in the Euro 2020 semi-final. The duo, who created the iconic football song Three Lions, posed for selfies with fellow fans in the stands before kick-off.

Frank and David were also spotted on-camera during ITV’s coverage of the match, singing along to their iconic anthem when England won 2-1.

The comedy double act looked overjoyed when the team earned themselves a place in the final against Italy on Sunday, which will mark England’s first ever final in the competition.

Alongside selfies with fans, Frank and David also posed for a snap together in the crowd.

The funnymen were pictured grinning for the camera as they sat in the stands waiting for the match to begin.

David shared the snap in view of his 99,000 Instagram followers last night and referenced the lyrics from Three Lions in the caption.

David and radio host Frank have secured the coveted number one spot in the charts twice since their iconic hit, also known as “It’s Coming Home”, was first released in 1996.

The pair previously got together to support Gareth Southgate’s team in their victory against Germany last week.

David shared another selfie of himself and Frank celebrating in the crowd alongside another lyrics-inspired caption: “It’s….”

He added in another snap: “So…it’s been a while since we were here for this particular fixture. #ENGGER”

The double act wrote the anthem in 1996 as England prepared to face Germany in the semi-finals of the European Championships.

The comedians collaborated with rock band the Lightning Seeds to produce the track.

The chorus lyric, “it’s coming home”, refers to the Euro 96 competition being the first football competition England had hosted since the 1966 FIFA World Cup.

Frank and David’s appearance at the match caused excitement amongst England fans, who urged them to reunite and perform their hit anthem at the final.

One person penned on Twitter: “@Baddiel @FrankOnTheRadio better get a wriggle on, 4 days for a new release and lyrics for the final.”

Another added: “Someone get @Baddiel and @FrankOnTheRadio on the blower! Three Lions 2021 lads?”

A third fan commented: “#ItsComingHome @Baddiel @FrankOnTheRadio come on guys get in the recording studio and do a special for Sunday!!! England need you!!”

A fourth wrote: “If @IanZBroudie, @Baddiel and Frank Skinner are not booked to be playing in the centre of the pitch after the final whistle on Sunday if England win, then someone has missed a huge trick.”

A fifth tweeted: “Petition for @Baddiel and Frank Skinner to release Three Lions ‘21 if we win the Euros.”

A sixth asked Frank: “@FrankOnTheRadio just wondering in there was ever a follow up single in the pipeline to three lions for when we won.”(sic)

A seventh suggested: “Please @Baddiel @FrankOnTheRadio record a new Euro2020 version of three lions if we win the euros.”