[WARNING: THE FOLLOWING CONTAINS SPOILERS FROM "GAME OF THRONES"]

With Season 8 of “Game of Thrones” underway, Emilia Clarke is making fun of her character’s incestuous relationship on social media.

Clarke, who plays Daenerys Targaryen on the hit HBO show, posted a picture of herself and co-star Kit Harington on Instagram Tuesday with the caption: “The family portrait.”

The 32-year-old actress also included the hashtags: “#jeneregretterien,” which means “I regret nothing” in French and “#okmaybehereiseetheresemblance.”

The co-stars are pictured with their heads poking out of a viking couple cardboard cutout. Harington plays Jon Snow, Daenerys’ nephew and love interest. 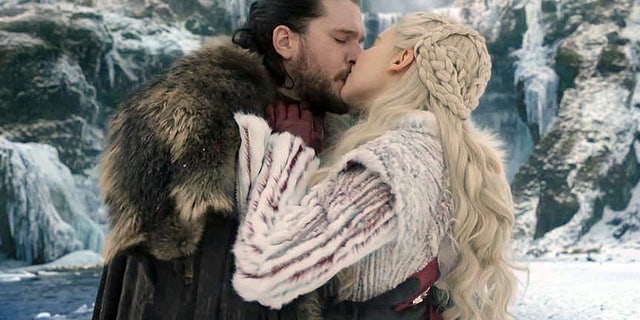 Kit Harington had previously spoken about how kissing Emilia Clarke on "Game of Thrones" was “really odd” because of their friendship and Clarke’s friendship with Harington’s wife Rose Leslie. <br data-cke-eol="1">
(HBO)

Harington had previously spoken about how kissing Clarke on the show was “really odd” because of their friendship.

Harington’s wife, former “Game of Thrones” actress Rose Leslie, is also close friends with Clarke, which he said added to the awkwardness.

“Emilia, Rose and I are good friends, so even though you’re actors and it’s your job, there’s an element of weirdness when the three of us are having dinner and we had a kissing scene that day," Harington, 32, told The Daily Mirror after the Season 8 premiere.

It's not that weird, however. He joked, “She’s wonderful and I love Emilia and I’ve loved working with her. And it’s not hard to kiss her, is it?”