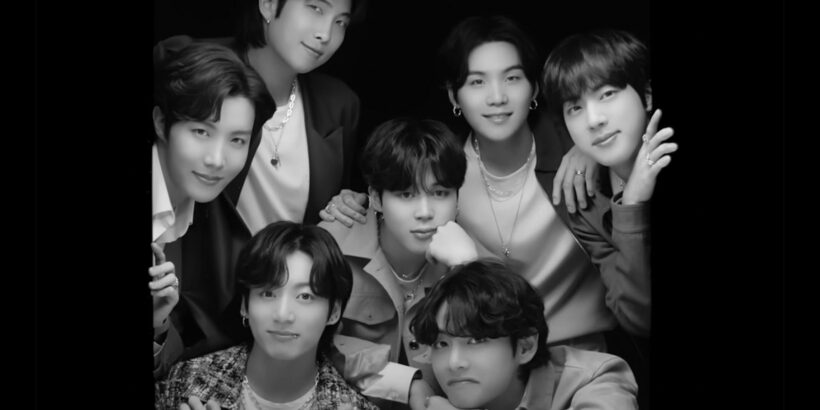 BTS may be taking a temporary hiatus, but the group members aren’t going anywhere. Bad Decisions the group’s new single with Snoop Dogg just dropped (and is topping the charts) and now, Suga’s unveiled an upbeat new campaign with Samsung, remixing the phone company’s “Over The Horizon” ringtone for 2022.

The original Over The Horizon ringtone first made its debut back in 2011 and was the default chime on every Samsung Galaxy device. Now, with the recent release of Samsung’s newest smartphones, (the Galaxy Z Fold4 and Flip 4) the signature sound gets another makeover by the music superstar (Suga also created a remix for the ringtone in 2021).

The debut of the new ringtone also comes with a new black and white “music video” where members of BTS can be seen grooving to the new tune. Samsung says the idea behind the new remix was to create an uplifting beat “to encourage people to look to a bright future and to think about what excitement is waiting Over the Horizon.”

The ringtone itself packs a familiar beat but now features catchy guitar riffs and an orchestral style crescendo you’d expect to hear at the end of a rom-com movie. The creation is full of melody and leaves you feeling jazzed and excited — which is what Samsung and Suga hoped to showcase with the remix.

Suga worked behind the boards to produce the updated track, making him the only musician to ever add two different spins to the Over The Horizon theme. BTS are also longstanding partners with Samsung and just released a brand new campaign featuring the latest Flip4 phone and their song Yet to Come. In the video, you can see the members interact with the Galaxy Z Flip4 while leading you in and out of themed rooms. Intrigued? You can currently preorder the Galaxy Z Flip4 phone for yourself in four colors and three storage sizes.

If you’re looking to add the new BTS-approved Over The Horizon ringtone to your new phone, you’re in luck. Samsung says a future software update will make the new ringtone available for all Galaxy devices.

Interested in what else Samsung launched at their biannual Samsung Unpacked event? Check out our full article on the release.