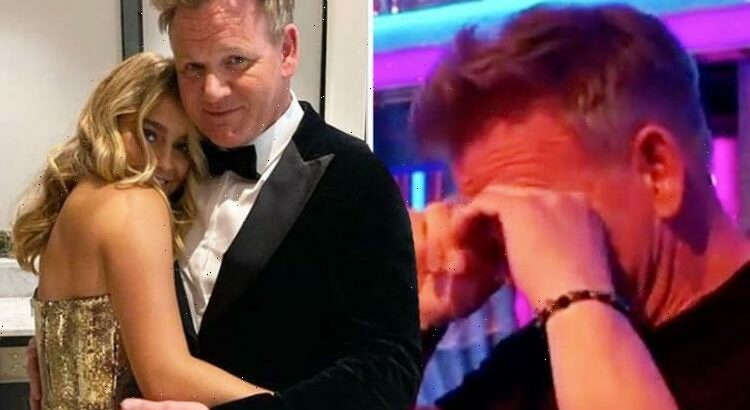 Strictly: Gordon Ramsay says he was a 'mess' watching Tilly

Gordon Ramsay made a rare appearance alongside his wife Tana to support his daughter Tilly Ramsay and her dance partner Nikita Kuzmin on Strictly Come Dancing in week two. Following the dancing duo’s impressive performance, the chef was seen wiping away tears.

Addressing her dad’s reaction, the 19-year-old said: “I still can’t believe he cried, he’s so not that kind of guy!

“The whole family are so supportive and hopefully proud of me.

“Without their support really none of this would be possible,” she added to What To Watch.

Gordon’s crying was a talking point on social media that evening, with many surprised at his sensitive side.

Brianna wrote: “Gordon Ramsay in the audience crying because he’s so proud of his daughter has absolutely set me off. This is the most wholesome series #Strictly.”

Shannon added: “Never thought I’d spend my Saturday night getting emotional at Gordon Ramsay crying at his daughter dancing on Strictly, but here we are.”

Stace Williams tweeted: “This year’s #strictly is so wholesome even Gordon Ramsay is crying.”

The outspoken chef has since gone on to support his daughter throughout the competition.

In view of her 1.1 million, Tilly shared a clip of her and Nikita’s Cha Cha Cha routine as she thanked fans for voting for them.

Gordon commented: “Such an amazing Cha Cha Cha well done, keep working hard @tillyramsay @nikita__kuzmin one week at a time, brilliant such a joy to watch love you Dad.”

During the show, he also congratulated the pair via video link and praised their performance as “exceptional”.

However, he couldn’t resist taking a cheeky swipe at Nikita for showing too much flesh on the dance floor.

He said: “One little issue, Nikita, you and I have been talking for many months now.

“You know Frankenstein always has his top button done up. Come on, man.

“Get rid of the six pack. It’s a family show. Really?”

Tonight, the duo will return to the dance floor with a Tango to Ava Max’s Kings and Queens.

Strictly Come Dancing continues tonight at 6.45pm on BBC One.