Game of Thrones Season 8 looks to star the smallest cast since their very first season. Back in those days, most of the cast focused on the Starks and the Lannisters, with the occasional Targaryen. Now the cast is more evenly distributed among the Great Houses of Westeros (that are left, anyway). But even so, there are still new characters fans are learning about who might appear in the final season. For instance, is Rhaegar Targaryen in Game Of Thrones Season 8?

Though we’ve heard about Rhaegar since the Game of Thrones pilot, the show took their time revealing the truth about who he was, and what kind of person he had been. Though we learned that Jon Snow’s mother was Lyanna Stark by the end of Season 6, the confirmation that Rhaegar was not only his father but legally wed to Lyanna didn’t come until the end of Season 7. The character himself only finally turned up in Season 7 finale.

Is there any chance viewers will see him again? Jon Snow still has to find out the truth about his parents, and Bran Stark and Sam need to convince him their evidence is real. Could Rhaegar turn up in another flashback? Or is he one and done?

Fans who are hoping for an encore appearance this final season just got a boost. Because the actor who plays him, Wilf Scolding, just posted a photo that suggests he’s back next year.

This selfie that Scolding posted is taken in front of the Europa Hotel in Belfast, one of the major hubs where actors who are flown in for short-term filming at Titanic Studios regularly stay.

I must admit, this alone is circumstantial evidence, after all, Game of Thrones isn’t the *only* thing that films in Belfast, or at Titanic Studios. (It just feels like it is.) And, as Winter Is Coming points out, it could be a latergram, taken last year during filming for Season 7, and Scolding is merely trolling by posting it today.

But having more scenes with Rhaegar, and flashbacks to his marriage to Lyanna would be something fans of the novels would want very badly. Many, like me, still have questions.

Despite the secretive nature of Rhaegar’s marriage to Lyanna, and Jon Snow’s true parentage being hidden all these years, there’s just a piece of this puzzle missing. It does not track that the Crown Prince of Westeros and the Heir to the Iron Throne would be able to put aside his politically expedient marriage to the Targaryen’s only allies in Dorne, bastardize his children (and heirs to the throne as well), marry a completely different person who was pregnant with his son and brand new heir, and no one knew. 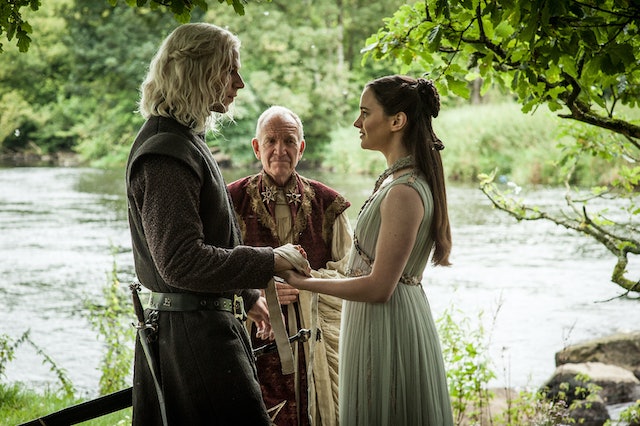 Someone had to know. Maybe all those people are dead now. (Lord knows the show has killed off enough of them.) But someone, somewhere, had to know. Is the show really going to insist Varys and his little birds didn’t know? Or that Tywin Lannister, Hand of the King, ear to the ground, wouldn’t have known? Wouldn’t Elia Martell not have tried to stop it? It was her marriage, her children, her heirs he was putting aside! How would people who were living in the Red Keep not have known?

I can believe that Tywin knew, and Varys too, but they both believed that Lyanna and her baby perished in childbirth, and it was better not to piss off Robert by bringing it up ever. They might even have wondered that Ned had a bastard. (Ned? Really?) But that only explains Ned’s absolute determination to secrecy, so those who knew about Lyanna’s marriage status, and might have been watching Jon never had any evidence he was anything more than Ned claimed.

Perhaps a final scene with Rhaegar will answer a few of these questions. Maybe even Varys will vouch for the truth of this too. Game of Thrones Season 8 returns to HBO in 2019.