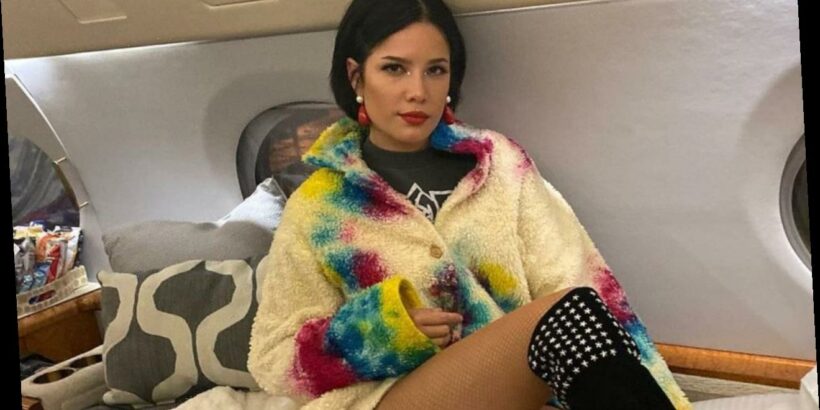 Happy to be able to share the good news with fans, the ‘Closer’ singer claims that her pregnant self would still be hitting the road if not because of the coronavirus pandemic.

AceShowbiz -Pop star Halsey is “bursting at the seams” with joy after she was inundated with well wishes following her surprise pregnancy reveal.

The “Closer” singer stunned fans and friends alike on Wednesday (January 27) by debuting her growing baby bump on Instagram as she announced she was expecting.

The baby news emerged more than three years after Halsey underwent multiple surgeries to treat uterine tissue disorder endometriosis, which previously caused her to suffer a series of miscarriages, and as she prepares to become a first-time mother, the star is thrilled to be able to share such good news with her followers.

“Thanks for the love I’ve been bursting at the seams for the past 48 hours (sic),” she posted on Twitter in the early hours of Friday. “it’s wonderful to celebrate something with you all after years of sharing all the sad stuff.”

Halsey expressed her joy over well wishes for her pregnancy.

Halsey was able to keep her pregnancy news a secret for so long after having to cancel her “Manic” tour due to the coronavirus pandemic, but she insists she would have hit the road, baby or no baby, if the COVID crisis hadn’t shut the live entertainment industry down – despite previously opening up about suffering a miscarriage while on tour in 2015.

Pregnant Halsey would still do touring if not because of COVID-19.

She added, “And just so we’re aware, if it wasn’t for Covid I woulda done the tour pregnant (sic).”

Halsey is expecting the child with her boyfriend, screenwriter Alev Aydin. She revealed the baby daddy by tagging Alev in the pregnancy post. It’s unknown though how long she has been dating the screenwriter as the couple has never publicly confirmed their romance.