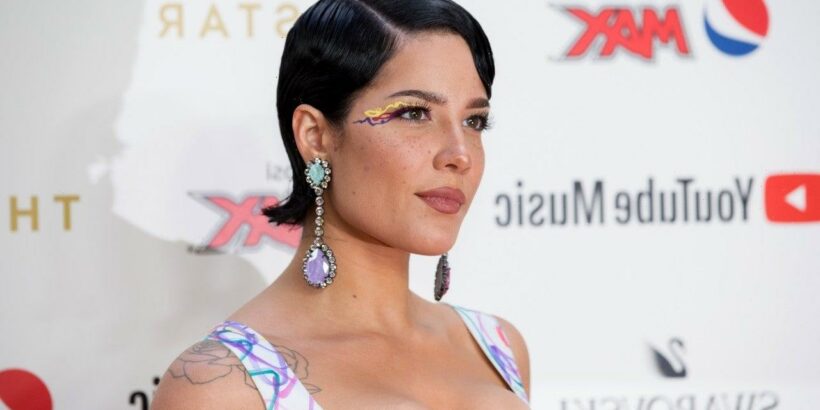 Halsey is getting candid about their pregnancy journey.

The 26-year-old singer recently welcomed their first child, a baby named Ender, with boyfriend Alev Aydin, and detailed how difficult it was being pregnant in the public eye.

“I’m 26, and I tried very hard for this pregnancy and it was like, I’m financially independent, I’m pretty far along in my career, it feels like the right time for me to do it. And I got treated like a teen mom a lot of the times,” Halsey said during an interview with Zane Lowe on New Music Daily on Apple Music 1. “Where people were like, ‘Oh my God, you’re so young, and you have so much to do in your career, and you’re not married and you’re this.’ And it triggered all of these feelings of shame from when I was younger. It triggered a lot of old feelings of shame in me where I was like, how can you have an opinion, that kind of opinion on me making this decision?”

Halsey, who released their new album, If I Can’t Have Love, I Want Power,on Thursday night, added that the “flip side” of it would be “that if I don’t and I wait until I’m in my ’30s and I do SNL for the sixth time and have my 7th No. 1 album and whatever. I’d do the same stuff over and over and over again.”

“But then, there’s also, ‘She worked too hard, she never had a family. She’s going to die alone. She was too obsessed with work, she never found someone,'” Halsey added. “‘It’s a shame she’s not going to have any kids, her career’s not going to hold her at night.’ OK. So nothing. So f**k ’em and I just was like, I’m going to do what I want to do. You know what I mean? I was like, this is important to me.”

During their pregnancy, the artist decided to take some time off social media and wanted the experience to be only theirs.

“I had to make a choice, especially in my pregnancy, where the girl who’s been the open book for six years, this had to be mine. I was not going to put myself [out there],” the “Graveyard” singer admitted. “The consequences were too high. The consequences of letting social media stress me out or cause me grief. It’s no longer just me being affected by it. There’s a whole other person whose nervous system is being affected by the status of mine. So I had to kind of make that choice.”

The “Bad at Love” singer previously shared how they found out they were pregnant a couple of years ago and suffered a miscarriage while performing onstage. Halsey has also suffered from endometriosis — a painful disorder in which tissue that normally lines the inside of your uterus grows outside your uterus and causes severe pain — for quite a few years and even underwent multiple surgeries to help treat their condition.

Halsey, meanwhile, also touched on their loving partner and leaving their past relationship trauma behind.

“I love my partner, our relationship is so full of love and passion and communication. I remember having that moment when I was probably five or six weeks pregnant and being like, so what happens now? Do I have to be boring?” Halsey recalled. “So many of the things that I self identify with are not compatible with motherhood. Well, that’s when you realize too, that’s when you take a step and you go, oh, I’m holding onto my trauma because it’s part of how I define myself and I’m never really going to grow unless I really let go of that trauma.”

As for their new album, If I Can’t Have Love, I Want Power, Halsey called it “the easiest album I’ve ever written.”

“Everyone was like, ‘Why are you writing an album, you’re pregnant?’ Because it was the easiest album I’ve ever written,” Halsey expressed. “And in true Halsey fashion, the writing of the album always manifests itself in a complete juxtaposition to how I feel in my real life.”

“Now here comes me, totally in love, the world’s in shambles, but I’m getting arguably, the first break I’ve had in seven years,” Halsey continued. “I’m finally taking care of myself, eating my vegetables and getting sleep and I’m pregnant and everything’s amazing and then out comes this.”

For more on Halsey, see below.

Halsey Gives Birth to Her First Child With Alev Aydin