With just four episodes left in this season of The Handmaid’s Tale, things are starting to pick up fast. Each episode, the promise of a massive uprising becomes more real, and judging by The Handmaid’s Tale Season 2 Episode 10 promo, that rebellion will coincide with the birth of June’s baby. Having a baby should be an amazing, life-changing event, but this is Gilead, so don’t expect flowers and kind words for the new mother. In Episode 10, June finds herself in the crosshairs of practically everyone’s drama (on top of her own), so get ready to spend the next week worrying over her fate.

For the last few episodes, The Handmaid’s Tale has focused as much on Serena Joy as it has on June, but that’s all about to change in Episode 10. After nine long months, June is ready to have her baby, but it will be far from normal — remember Janine’s delivery in Season 1? Midway through the new promo, June goes into labor while shopping, and the other handmaids and wives immediately descend on the Waterford residence for the birth. Cue the weird white "birthing" outfit for Serena, who lies surrounded by the other wives and pretends to push, and another speech from baby-obsessed Aunt Lydia. "Oh blessed and glorious day," she proclaims to the group of handmaids gathered around June.

For the first time, Serena lets her hair down and seems actually happy about something, but things quickly take a turn. While Serena is lying on the bed "giving birth," Aunt Lydia walks in and asks for her attention in a very ominous tone. Her quiet "Mrs. Waterford?" can only mean two things: Either something awful has happened during the delivery, or June has somehow managed to slip away again. I’m hoping that June has escaped (I can’t cry over another sick baby), but in Gilead, the threat of death looms large for everyone — even newborns — so it’s possible something catastrophic has happened to the baby. Either way, something very, very bad is about to happen to June, and I already know I’ll be worried about her until Episode 10 airs.

As if things weren’t looking bad enough for June, it seems like Eden, Nick’s pious wife, will be coming for her, as well. Eden has been suspicious about Nick for months — she even went so far as to ask June if he was a "gender traitor" — but her suspicions come to a head when she confronts her husband about June. "You don’t look at me. You don’t touch me unless you have to," she tells him in the promo. Nick tries to brush it off (hasn’t he learned by now that ignoring Eden doesn’t work?) but she persists: "It’s the handmaid," she says. Somehow, the Commander has remained ignorant about Nick and June’s relationship, but I have a feeling that that’s all about to change now that Eden knows the truth. 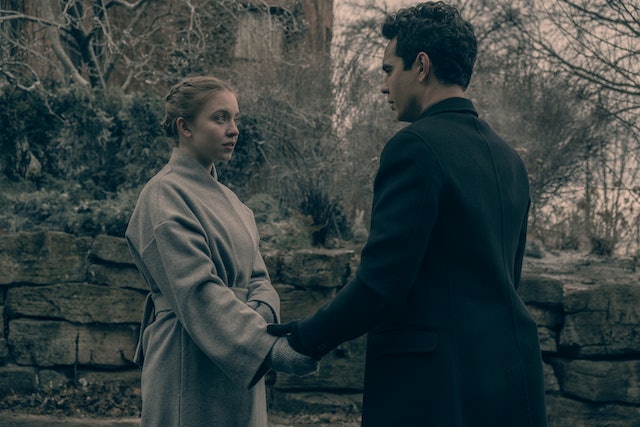 The promo isn’t completely unpleasant, though. At the beginning of the trailer, June flatters the Commander by letting him touch her stomach and then cashes in on the goodwill. "You’re going to be a father yourself soon. I need your help," she says. In Episode 9, June asked Rita and Aunt Lydia to look after he baby once she’s been kicked out of the house, so could she be requesting the same of the Commander? He does think that it’s his baby, after all. But at the same time, June can’t possibly think that this monster knows how to care for a child, right?

While it remains to be seen what June asks the Commander, it does seem like he helps her out, at least in some way. At the very end of the promo, Commander Waterford places June in a car and tells her that he’s "planned a surprise" for her. "You deserve this," he says before kissing her on the forehead. June obviously recoils because he’s disgusting and the kiss is laced with misogynistic desire, but she doesn’t question where he’s taking her.

Could the Commander be whisking her away mid-delivery? Is that why Aunt Lydia looks so upset when she speaks with Serena? Is he going to break her out of Gilead?! It’s going to be a looong week until I get these questions answered.