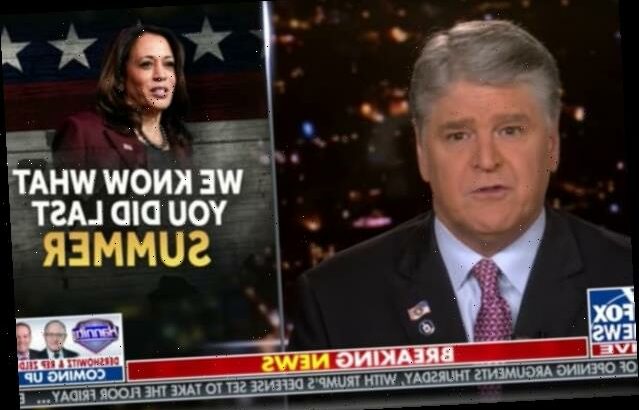 Sean Hannity really struggled to distinguish between a riot and a protest on Thursday night as he continued to use his platform in defense of Donald Trump’s incitement of a far-right mob that attempted to overthrow the government. This time, he drew an incredible false equivalence by comparing that coup attempt to peaceful Black Lives Matter protests near the White House last summer.

This was a misleading tactic that many people used on Fox News last year during the protests — sparked by the death of George Floyd at the hands of a Minneapolis cop — acting like the generally peaceful demonstrations represented some kind of existential threat to the country.

In reality, most of the clashes between Black Lives Matter protesters were the result of the police escalating the situation. Police were five times more likely to use force against peaceful BLM protests than they are against other types of demonstrations. Not only that, but the two examples most often used to draw equivalence between the BLM protests and the Jan. 6 insurrection — the murder of several police officers in California, and the burning of a Minneapolis police precinct — were actually committed by right wing Trump supporters police say were conducting false flag ops in order to spark a civil war.

The highest profile instance of violence during those protests came when right-wing teenager Kyle Rittenhouse shot and killed two protesters.

But Hannity wasn’t worried about those details while making his false equivalence.

“Like fake news CNN and MSNBC: ‘Uh, it’s been mostly peaceful.’ Meanwhile the city’s ablaze behind them,” Hannity whined, before dramatically mischaracterizing one specific protest.

“Earlier that summer far left rioters surrounded the White House, remember that? The president and his family inside for hours, they attempted to breach the perimeter set up by the Secret Service. Remember we were told the White House complex faced the highest security alert since 9/11/01?

“The president and his family were rushed into a secure bunker after fears that the perimeter would be breached and not hold, not be held. This happened only a few months ago! Nobody on the left seemed to care. Where was the outrage from Democrats when this sacred building was attacked?”

Hannity isn’t telling the truth here. BLM protesters did not “attack” the White House. They also never “surrounded” it. They stayed at least 30 yards from the White House lawn throughout. The most notable thing that happened during those protests in Washington was when the National Guard and U.S. Park Police assaulted the protesters without provocation so Donald Trump could participate in a photo op.

“Where was the outrage when far left rioters showed up at Senator Josh Hawley’s front door harassing his wife and young child?” Hannity complained, even though no rioting actually occurred during that incident, because standing in front of somebody’s house and yelling is not a riot.

You can watch the quoted portion of Thursday’s episode of “Hannity” on Fox News in the video embedded up at the top of this article.