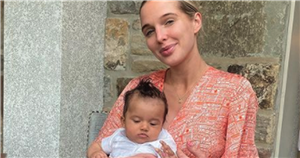 Helen Flanagan has revealed she's considering expanding her brood after realising carrying newborn son Charlie was "so worth it".

The 30 year old mum-of-three had previously stated that her baby boy, who was born in March this year, would be her "last child".

However, it appears the star has changed her mind, despite her the struggles she faced with hyperemesis gravidarum during her third pregnancy.

The Coronation Street star, who plays Rosie Webster in the ITV soap opera, explained that she thought she would "never have another baby" after feeling "dreadful", but confessed "as soon as Charlie arrived I just thought, 'You’re so worth it.'"

Now, the doting mum feels as though another child could well be on the cards for the future with fiancé Scott Sinclair, who she also shares daughters Matilda, six, and three year old Delilah with.

"I’m not ruling out having another. I’ve always said in my head I wanted four," she told Mirror Online. "I think for women it’s really sad to say, 'This is my last baby.' And Scott is very laid-back about it.

"But I would have to wait until Charlie is a bit older."

Helen also opened up on her wedding plans with the 32 year old professional footballer, explaining that the pandemic made it impossible for them to tie the knot in their dream destination of Italy.

"But I can’t wait for us all to have the same name. I’m so looking forward to our wedding. Right now I wouldn’t plan to get married abroad as I’d be devastated if it all had to change.

"I just want to wait until everything is a bit safer," she explained.

The actress, who recently showed off her post-baby body four months after giving birth, continued: "We’re thinking 2023. It will be such a nice celebration because Scott and I have been together for such a long time, and because of that we do want a big wedding.

"I have looked at locations in England but I’m really picky. I’ve just not seen anything yet that feels sentimental."

She added: "I’m quite romantic and want something that’s perfect for us."

It comes after Helen recently spoke exclusively to OK! about the star-studded guest list, revealing that some of her Coronation Street co-stars will definitely be getting an invite.

Asked whether or not she will be inviting any of her co-stars to herself and Scott’s big day, Helen told us: “Oh yeah of course. I want to do it quite big.”

For all your updates on Helen Flanagan, sign up to our daily OK! newsletter.