If you studied lists of Marvel characters likely to make a surprise cameo in Avengers: Infinity War, Red Skull probably wasn’t among the top predictions. Spoiler Alert: Spoilers for Avengers: Infinity War follow. Last seen in Captain America: The First Avenger, Red Skull briefly reappeared in an unexpected way in Infinity War, but his last Marvel venture was so long ago that I don’t blame anyone for not remembering him that much. So, who is Red Skull? The character showed up at a crucial point in Infinity War‘s plot.

To be fair, the villain’s appearance in Infinity War was only slightly more brief than his past franchise role. Red Skull, aka Johann Schmidt, appears as a gatekeeper of sorts on the planet Vormir, where he must instruct those seeking the Soul Stone on how to achieve their mission. After Thanos kidnaps Gamora, he forces her to tell him the true location of the Soul Stone, which leads them to visiting Red Skull on Vormir. There, Red Skull, complete with a very Star Wars-esque hooded cloak, informs them that in order to attain the Soul Stone, one must sacrifice someone he or she loves to gain possession of the Stone. As Red Skull tells them, "A soul for a soul."

This exchange leads to one of the more painful moments of the film, in which Thanos almost develops a human side and seems to contemplate whether or not he should sacrifice his adoptive daughter, Gamora, but we all saw how that ended. Once Thanos snatches up the Soul Stone, Red Skull’s role in the film ends just as quickly as he appeared, but if you caught wind of some intrigued murmurs among your theater’s other audience members when he was revealed, there was good reason why. 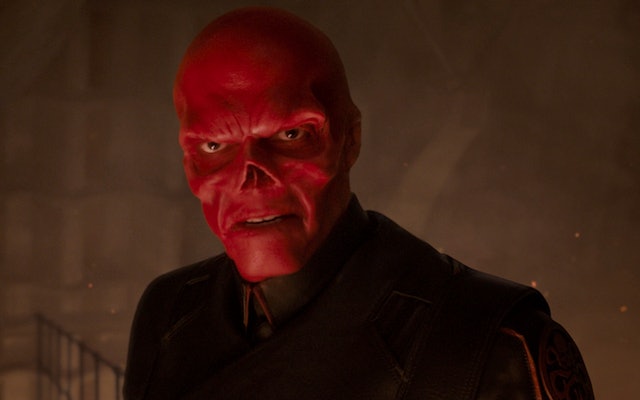 In 2011’s Captain America: The First Avenger, Red Skull (played there by Hugo Weaving rather than Infinity War‘s Ross Marquand) is initially the head of HYRDRA, working alongside Nazis during World War II. When he orders a scientist to use the incomplete Super Soldier Serum on him, Johann Schmidt’s face is deformed, leading to his nickname of Red Skull. Red Skull and his men later steal the the Tesseract, which contains the Space Stone, and he disconnects HYDRA from the Nazis, developing it as a force against both the Allies and Axis and, as all villains do, focusing on a goal of world domination.

This mission obviously comes to Captain America’s attention, culminating in a final battle during which Red Skull picks up the Tesseract and disappears in a cloud of white light as a result.

For the sake of Captain America: The First Avenger, he was defeated, but fans were left wondering whether Red Skull was truly dead or just zapped to another dimension, planet, etc. It took seven years, but we finally got an answer. Red Skull has been hanging out in the limbo of Vormir guarding the Soul Stone, but now that Thanos has the Stone, there are more questions regarding the onetime villain.

As Screen Rant points out, the Stone no longer being in Vormir could mean that Red Skull has a new life in store for himself. We didn’t receive any clarification about what happens to Red Skull after Thanos sacrifices Gamora, but it’s possible that Red Skull either dies or has a entirely new chance at life ahead of him. With time travel expected to play a role in Avengers 4 and future Marvel movies to focus on newer characters, the studio could always bring back Red Skull as a key antagonist in upcoming stories.

Of course, Red Skull’s fate is the least of our concerns after seeing that final Infinity War scene. Maybe Thanos could just drop Cap a message filling him in about Red Skull’s existence before the two face off in Avengers 4.