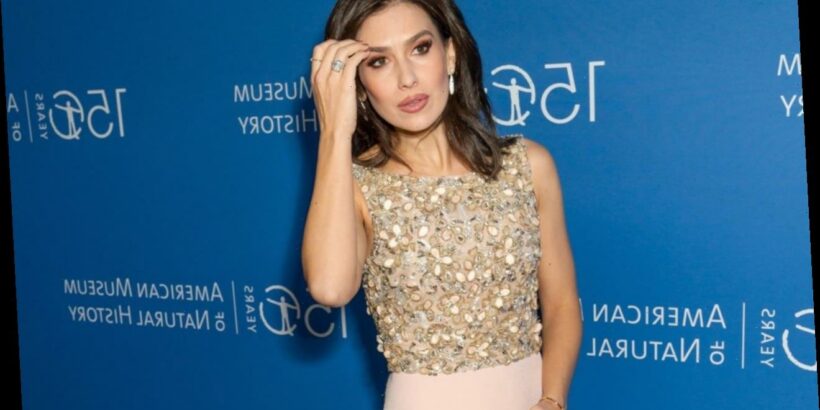 The yoga instructor, who just welcomed her sixth child with husband Alec Baldwin, claims on her Instagram page that ‘breastfeeding two babies is no joke.’

AceShowbiz -Hilaria Baldwin might have been overwhelmed by her current situation as a mother to two infants. Having welcomed her sixth child with husband Alec Baldwin only months after giving birth to their fifth, the fitness expert described herself as a tired “cow” when talking about her ordeal in breastfeeding two babies.

The 37-year-old mother got candid about her motherhood struggle via Instagram on Wednesday, March 9. Sharing a selfie of her holding a bottle of sparkling water, she wrote, “This cow is tired and thirsty. Let me tell you something you might already know: breastfeeding two babies is no joke. I’m devouring any liquid I can get my hands on…But you all know that this is a favorite.”

Hilaria Baldwin compared herself to a ‘cow’ when opening up about breastfeeding two babies.

Hilaria introduced her sixth child to the world on March 1. At that time, she shared on Instagram a snap of herself being surrounded by her six young children, 7-year-old Carmen, 5-year-old Rafael, 4-year-old Leonardo, 2-year-old Romeo, 5-month-old Eduardo and the newborn. “7,” she captioned the post, not forgetting her husband’s 25-year-old daughter Ireland Baldwin.

One day later, Hilaria revealed the name she and her husband gave their new bundle of joy. Giving a closer look at their baby girl on Instagram, she noted, “We are so in love with our daughter, Lucia. Just like your brothers and sisters, you are a dream come true.”

On Thursday, March 4, the yoga instructor confirmed on Instagram that she and the “30 Rock” alum turned to surrogacy for their youngest child. “Many of you may remember the loss of their sister at 4 months in the end of 2019. There isn’t a day that goes by where we don’t ache for our daughter. When I found out our baby had died, I told our children that their sister was going to come, just not at that time,” she first penned along with a photo of Edu and Lucia.

“Nothing will ever replace her, but two wonderful souls have come into our lives, and we are humbled to know them,” she added. “Our rainbow baby, Edu, is such a blessing – we are overwhelmed by how fortunate we are to have him. We are living each day, bonding, and grateful for all of the very special angels who helped bring Lucía into the world. María Lucia Victoria and Eduardo Pau Lucas: our babies who bring light into our lives – almost like twins, we love you so much.”

Hilaria announced Edu’s arrival via Instagram back in September 2020. Along with an image that saw her holding her son next to her actor husband in a hospital, she gushed, “We had a baby last night. He is perfect and we couldn’t be happier. Stay tuned for a name.”